c.
How High?
First, we thought this crazy animal was too high at 77c.  Sorry, that was a million bales ago, when carryout was mid 5s.  Those bales are now sitting in China, or Viet, or Turk, or anywhere but in Uncle Sam's warehouse.  2011 proved its not just what the carryout is, it is also where it is.

Ed Yardini claimed there was 4-5 $T in cash wallowing around in money markets and banks, looking for hot markets.  Add to this stash of cash China's diminished appetite for treasuries, and just a little of this money horde can drive our markets crazy.  Looking at the broad commodity markets, is there even a single one that is trading below cost of production?  These are some good times, some call them fat.  Turning to our market, we got another slice of new crop hedged at 89c.  10% each at 73c, 77c, 81c, 85c, and 89c.  Thats half a load, and some pretty good prices, all are 20c to 36c above loan.  We also hold a spec position, long May 82 Put against short May 100 Call.  This has a little blood on it, and we plan to exit on a hard break.


One puzzling aspect of the market's mechanics is the declining volume on the rally since the spike to 100k on 4 Feb.  Volume has been lower nearly everyday since, clocking in at only 25k yesterday.  So too with open interest.  The end of Dec notice had OI at 212k, price was 70c.  OI has risen by 40k to 250k, but this is much below other bulls.  As this was written (10a cdt) cotton was attempting to make a "bearish engulfing" signal, which requires a May close below 9214.  Of interest is a possible weekly "star" top, given a close Fri near this week's open 9083.  If this action had occurred in Mar, it would have set up price patterns with long term timing events. 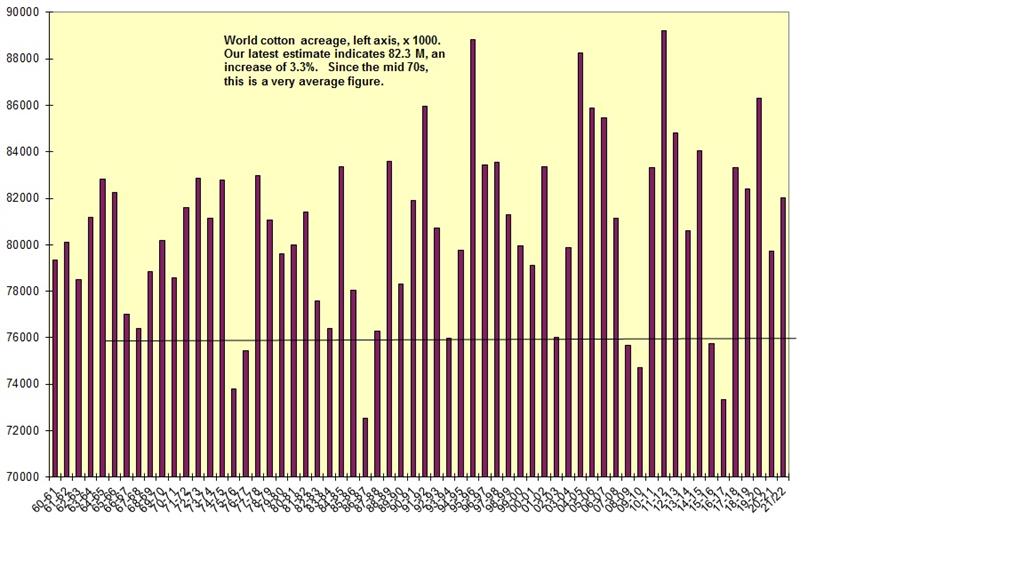