No Splash
Its rare when notice period takes a back seat to anything, but thats just how the Mar 21 notice has turned out.  A piddling 18 notices were issued by Term, with certs right at 100k.  The other rarity is that carry from Mar to May went to 88%, in a spectacular bull market.  Normally, a 90c raging bull would have meant a huge invert, but not this time. This market has partial carry to July, then it goes invert by +6c.  Its a strange package of spreads.

One newsletter says old crop carryout is as low as 3.5 Mb, while new crop could be 2.3 Mb.  Anticipation of such a low carryout can drive price as much as reality.  This happened in the 15/16 year when the market was deathly afraid of the destocking program China announced.  Even though carryout was in a very tight range of 3.0 to 3.6 Mb, price ranged from 66c to 56c as the start of destocking approached.

It is anticipation of a consumer surge accompanied by raging inflation that is driving our market now.  The 10 year yield rose to 1.35% today, highest level in a year.  Next target is the 2016 low at 1.41%.  The 10 year has been in a 40 year bull market in value, and a 40 year decrease in yield.  That's one long bull ride.

We tried backing into some hard numbers from the OF world supply/demand, and came up with total harvested acres of 82.037 M, a yield of 698 #/a, and production of 119.3 Mb.  Yield is pretty much an average of the last dozen years, excluding the disaster year of 15/16 of 609 #/a.  Planted acreage of 82 M is right at 18/19, and between the high/low of 89.2/73.3 M.  The gain of 2.3 M acres worldwide partially accounts for a market gain year to year of almost 9c on annual averages.  The price of cotton through winter, and the gain in price year to year, has put cotton at a very competitive level vs corn and soy worldwide. 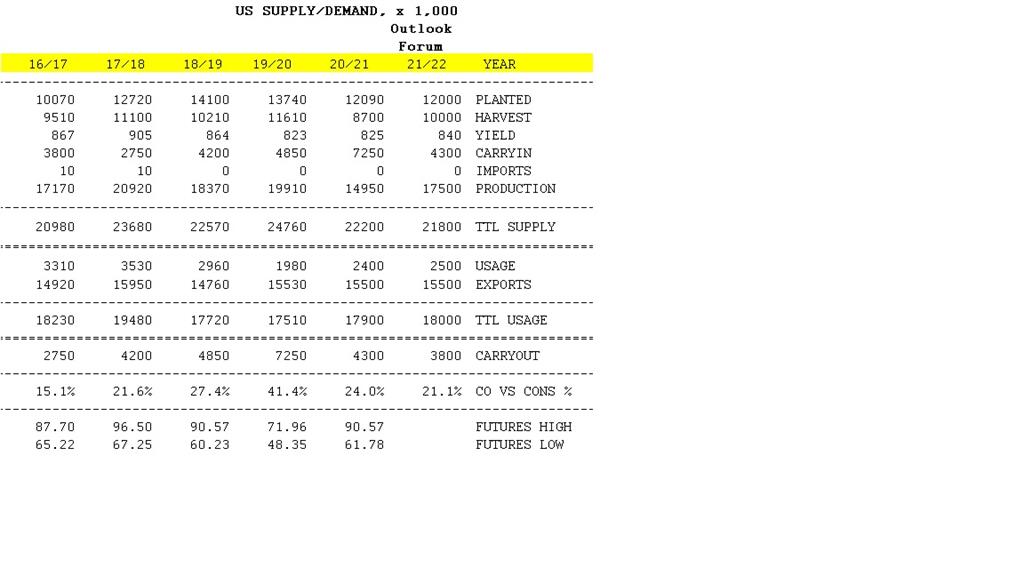