Cotton Beats Crude
One research house lumps several ag commodities in their "all ag" index, including row crops, softs, and livestock.  COT positions for this group shows net longs at an all-time high.  Corn, soy and soft red wheat have tied record net long, while KC wheat, meal and soyoil are showing high net longs, but not record.  Sugar, coffee, cocoa and cotton are near, but not at or above previous record high net longs.  Same for cattle and hogs.

A fundamental analyst for long term trades, sees a world economy that dips back into recession in 2021 and a modest recovery in the $.  If he is correct, that would derail the raving bullish and consensus attitudes in the ag complex now.  The Inflation Genie is out of the bottle and is most popular with the public, the large trade houses, numerous tv talk shows, and football coaches.  The Fed is their shining star.  No one sees recession brought on by lingering Corona problems next year, and if that occurred, it would dim commodity usage.

The tropical storm will largely miss key Southern cotton areas, other than AL and FL.  The remnants of the storm will skim the NE states and some rain will fall in the Carolinas and VA.  The Delta will miss this event.  However, the major winter storm now over W TX will move into the Delta tonight, and foul up harvest conditions again.  Recall last year was a late harvest, with some cotton picked between Thanksgiving and Christmas.

Check out chart below for how cotton has surged ahead of the world's leading market.

A small surprise showed up yesterday, with crop conditions inching up a couple ticks.  This flies in the face of overwhelming opinion that the crop has been trashed and thrashed by Mother Nature.  We also spoke to a trader who last weekend drove through W Tenn and the Bootheel, and more or less confirmed our thoughts on the harvest % in the report.  He counted many more modules in fields that suggest % harvested of 46% and 31% is much too low.  His guess was around 75% for Tenn and 60% for MO.  We are getting itchy trigger fingers.


One tech service sees a correction first to 68c, then to 65c, and longer term to 60ish.  OK, at least they are definitive and not "on the other hand."  Redundantly we mention today falls on a 144 Fib count from the major low of 4/02.  Another timing tidbit, is the day count from the 4/02 low to the intermediate high of 7/09 is 67 days.  Shift that cycle to the low of 7/24 and count forward 67 days.  That ends up on tomorrow, 10/28.  Therefore there are two major timing indicators this week, one intermediate indicator, and end of month, and a seasonal high due 10/26. 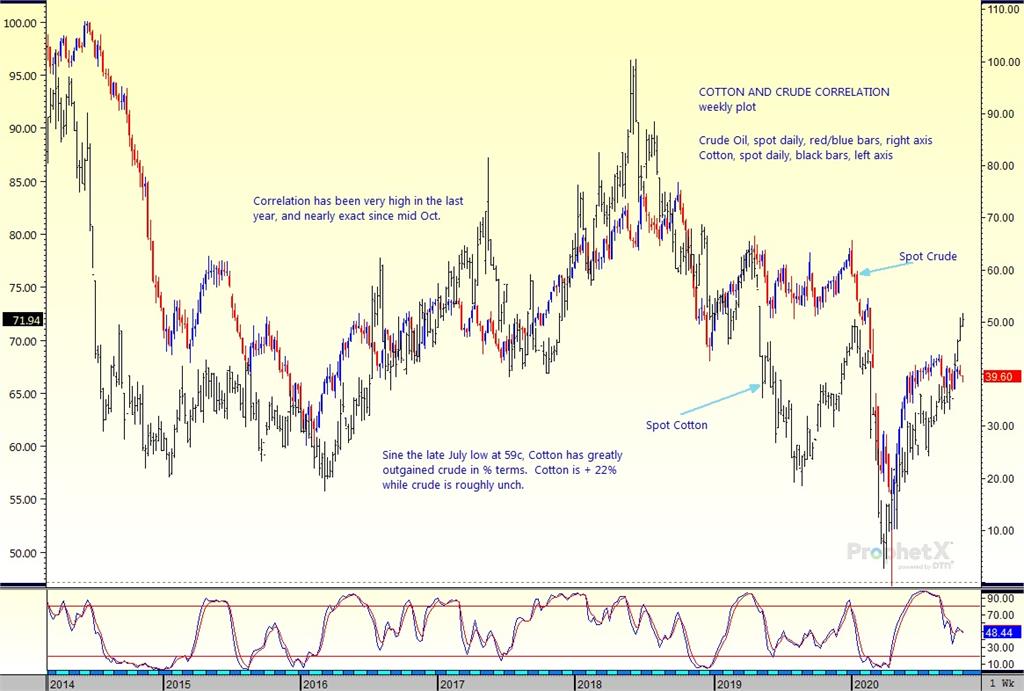