No Idea
We don't have a clue, or idea, as to market reaction after the election results are in.  But we do believe a Trump victory would be more entertaining while watching MSNBC and CNN.  Both parties seem hellbent on more stimulus, but the Dems seem to be dreaming of a blowout, while Repubs want something targeted and small.  Tax increases will be massive and many under Biden, as he wants to raise the corp tax from 21% to 28%, raise cap gains from 20% to 39.6%, pass a net investment income tax of 3.8%, and pass a financial transaction tax.  Then there is a chance of a 2% tax on wealth, which has been tried in Europe and other countries, and failed miserably.

Harvest weather has been downright horrible this year, with no less than 6 storms and/or fronts that have passed through parts of the South.  Its all clear now, and it looks like a lot of cotton will be harvested in Nov.  Much progress will be made by mid Nov.  The longer term issue is the drought in the near west, and analysts suggest this will linger all through winter due to La Nina.  Once New Year is passed, farmers in the RGV will need some rain.

At 72c, cotton was pricing in an end stocks from 5.25 Mb to 4.75 Mb.  The combination of a lower production, and higher exports, is much anticipated, written about, calculated, estimated, etc, by traders and analysts.  The Nov report is the one that contains hard evidence of yields, and history shows some rather large changes from Oct to Nov.  In the last 2 decades, it was much more likely that an increase or decrease from 1/2 Mb to 1.25 Mb would occur, vs no or little change.  But a cut of 1.5 Mb would be a rarity, so our guess is something at or slightly below 16.0 Mb for crop size.  We are negative and short.  As for objectives, the "no idea" is appropriate for now.

Dec continuous chart shows the 7300/7225 area holds 3 previous reversals.  Those were a pair of lows in Jan/Feb 2019, and a high in Jan 2020.  Timing events have been mentioned much this week, but there is one more to bring up.  Oct is a 55 Fib count from the major low of Mar 2016.  As for patterns, the daily and weekly charts have made bearish engulfing reversals, while the monthly chart indicates a star top.  Sell rallies. 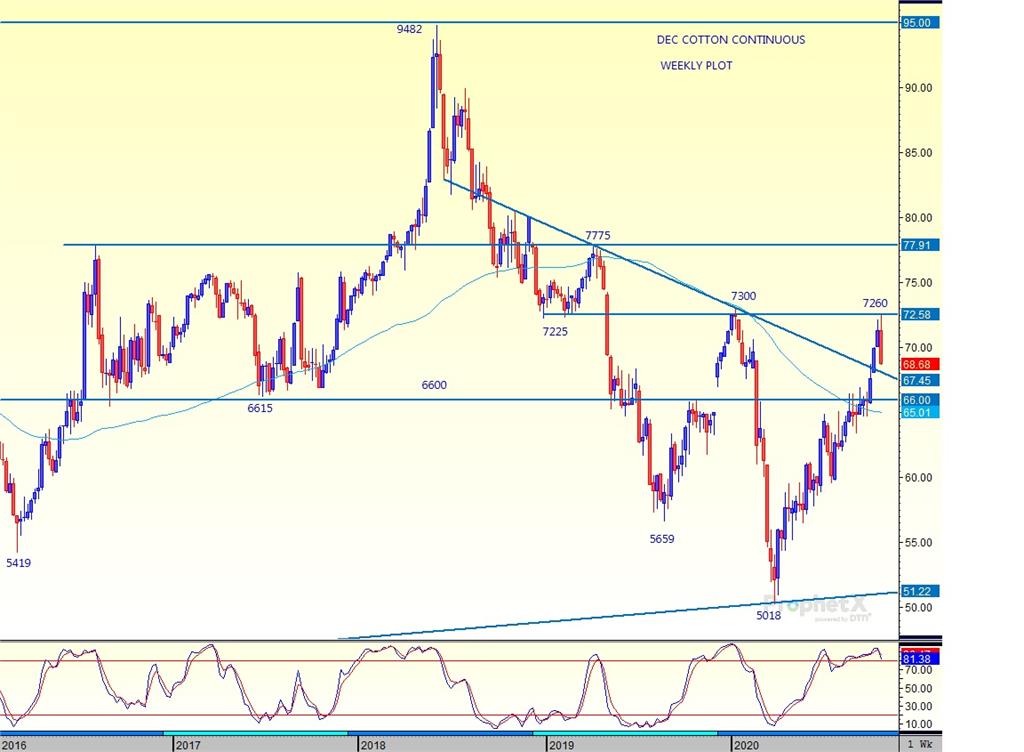