by Contributor
in Charts, Softs
0 0
0

Shifting Paradigm
Yesterday's grain stocks were a shifting of the paradigm upwards.  While the wheat balance sheet remains burdensome, corn and soy will have a better price high/low this year thanks to lower supplies.  Corn looks like a 440/360 annual price, and soy is pegged 1080/900, with a wide berth.  Wheat will do well to try $6, and has a tiny chance to make the 6 year high at $6.15.  It needs a drought in a major country to keep it near $6.  Call it 600/400, with a bias lower.

Higher corn and soy prices will have impact on cotton, especially during the winter decision period.  Dec 21 is right where Dec 20 is, near 66c, and is up 12c from the spring low.  All of the row crops today offer farmers a profit, but at slim margins.  Cotton has lost ground against its major competitors in recent months, but is not so far back to create a large cut in acres next year.

Cotton traders should monitor copper, as it has broken down to a 6 week low, and punctured a support trend line originating from the Mar low.  One catalyst for copper's action is the downward track in the Chinese currency, now at 6.75c, compared to 7.24c in May.  Crude is another market unnerved by the currency drop.

For the moment, cotton is attached to the grain markets, and is ignoring industrial breakdowns in copper and crude.  Cotton was left out of the magic act of disappearing grain, even though there are a couple of conspiracy theories out there about exports.  The USDA was under-counting exports last spring and summer, as opposed to Census getting it right.  USDA's export total consistently lagged Census, by 1/4 to 3/4 Mb.  So the theory goes, why shouldn't that trend continue?  There is no question that the US has lost some cotton in the last month due to weather, and more than a couple traders want to lose more due to exports being under-counted.  We expect end stocks in the Oct report to be at most 7.0 Mb, and will likely have a "6" in front.  But this doesn't create a bull. 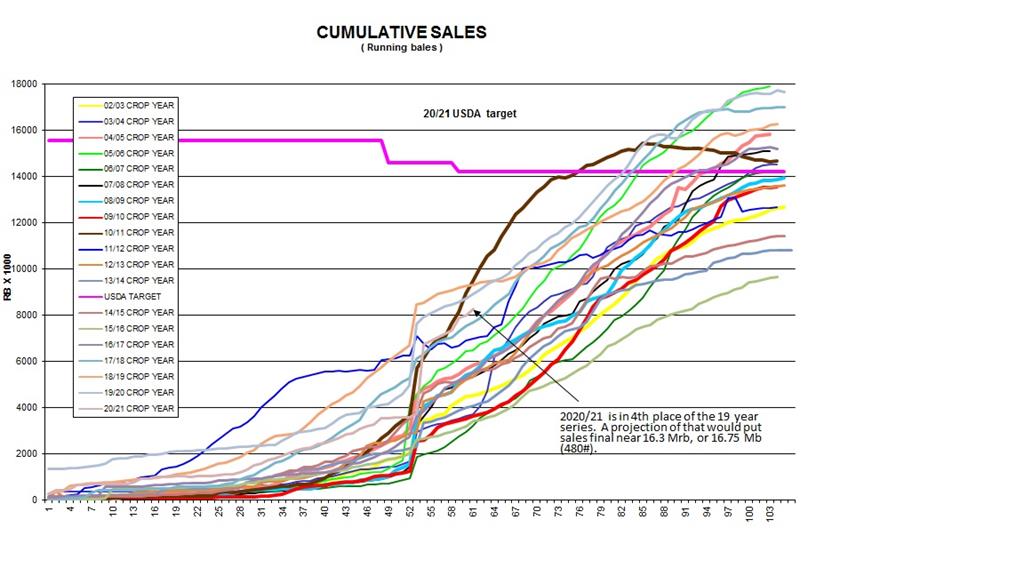