The Red Leader
The two markets that tend to correlate with cotton more than any others, are soy and copper.  Copper went to a fresh 8 year high today, while soy appears to be beginning a correction after a bull market that has been remarkably tight with cotton.  Both of these markets have bona fide positive balance sheets, unlike cotton.  Copper also has the added support of political turmoil in Chile, by far the world's largest source and producer.  Just last week the red metal took out major resistance, as $3.30 represented a low in 2012, a high in 2014, a high in 2017, and a high in 2018.

If copper and soy move into a corrective mode, other markets will also.  These 2 markets are among the leaders in what has been a broad rally off the Corona-inspired lows last Mar/Apr, with soy up nearly 50% off its low, and copper 70%.  Specs have been at or above record long for weeks, and even if some pare back before end of year, specs are very likely to maintain most of their holdings.  Until there are real and definable changes in the balance sheets, these two leaders will trade much above price zones in spring and early summer.

The $ did a little zippity-doo-dah on a decade long support trend line, ran stops, then inched back toward the breakdown point.  Cotton traders know much about false breakouts and head fakes.  We've been watching this major support level for 4 months, and it has been a tedious tease.  It doesn't take a smart trader to figure out what to do in any market, if the $ really does break down.  And that break down is tantalizingly close, but not a fact…yet.  As for our market, cotton has to take a back seat to those that have solid balance sheets.  Cotton must have a year, or two, of good demand, and a year, or two, of giving up acres, in order to gets its balance sheet back to normalcy.  We own Puts, and are considering another go-round with short futures.


Regards copper, the spot chart made a new high today, but also raised the specter of a bearish star, given a lower open and close tomorrow.  Copper has reached between 50% and 62% of the retrace from the 4.63 high to the 1.94 low.  The pattern since 2016 looks like a broad A-B-C correction of the move down from 4.63.  A seasonal high is due now, and seasonal lows are scattered from mid to late Dec. 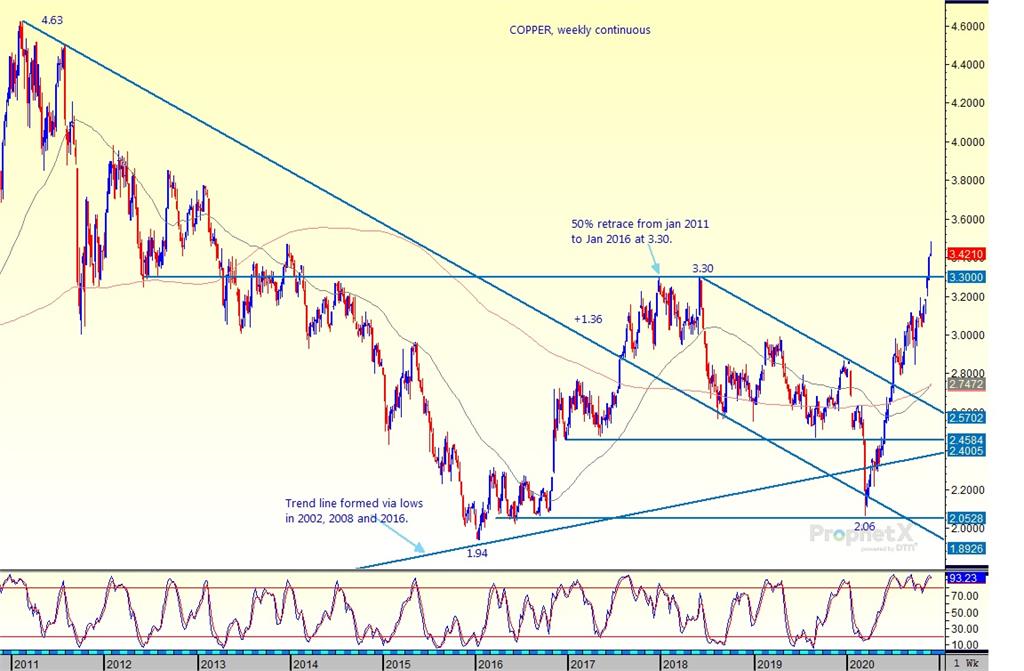 PEAK ASSET: MORNING WRAP 1 DECEMBER: | ASX to slip | U.S. Stocks Fall From Record Highs; Dollar Gains | Cybersecurity outlook: Here’s why 2021 will be an even bigger year for the sector |

PEAK ASSET: MORNING WRAP 1 DECEMBER: | ASX to slip | U.S. Stocks Fall From Record Highs; Dollar Gains | Cybersecurity outlook: Here’s why 2021 will be an even bigger year for the sector |