Sales were erratic into early Nov, when price made a low near 70c.  Now +15c, sales have soared in spite of, or because of, rising price.  It seems upside down economic logic, but the world's mills have accepted the theory that consumer demand for textiles is soon to explode, as Corona fades away.  They also are all-in with the theory that inflation is here, and commodity prices are in a new "supercycle."  JPM analysts say inflation is "turning," brought on by ultra-loose money, lavish fiscal policies, a weak $, and environmental policies that require massive spending an commodity consumption.  Hard to argue with all of that.

The largest concentration of cotton production in the US is in an area of the harshest weather, on both sides of the dial.  Lubbock's forecast on Mon is 4.5" snow, and -3F.  As this was written, the temp is 22F, and "feels like" 22F.  No need to embellish extreme temps on the Llano Estacado with "feels like."  The snow is welcome, and is akin to about 1" to 1.5" rain.

Rumblings of mill discontent over prices are out there, but the buying keeps a steady march.  Shipments foretell an even larger figure than sales, as they are now 1.3 Mrb above the 2 high years, tied at 2nd.  The best-ever shipment year was 17/18 (disregard 05/06) at 15.5 Mrb.  Taking a straight-line projection arrives at a potential this year of 16.8 Mrb, or 17.3 Mb (480#).  Assuming a 2.5 Mb roll, that would take total sales to 19.8 Mb, a truly explosive number.  And that would take carryout to 2.5 Mb, a level seen in 10/11 and 13/14.  This little exercise uses only 1 year as a benchmark, an unfair and statistically unreliable calculation.  But it sure does get one's attention.  We are reworking our acreage estimate, in time before next Fri Outlook Forum number.

Island top?  A neat little technical pattern, one that in a bull market is made by a gap into new highs, followed by 2 or more days of sideways chop.  The pattern is confirmed when/if it gaps below the low of days at the new high, so as to leave a gap before and after.  Nothing so far, but it does set up an interesting possibility.  Regards volume, this has kept up a hot pace, 5 days in a row.  Most of this is in spreads, rolling spec longs to May, and rolling merchant shorts.  The merchants get the better side of this, with Mar/May trading 85% of carry. 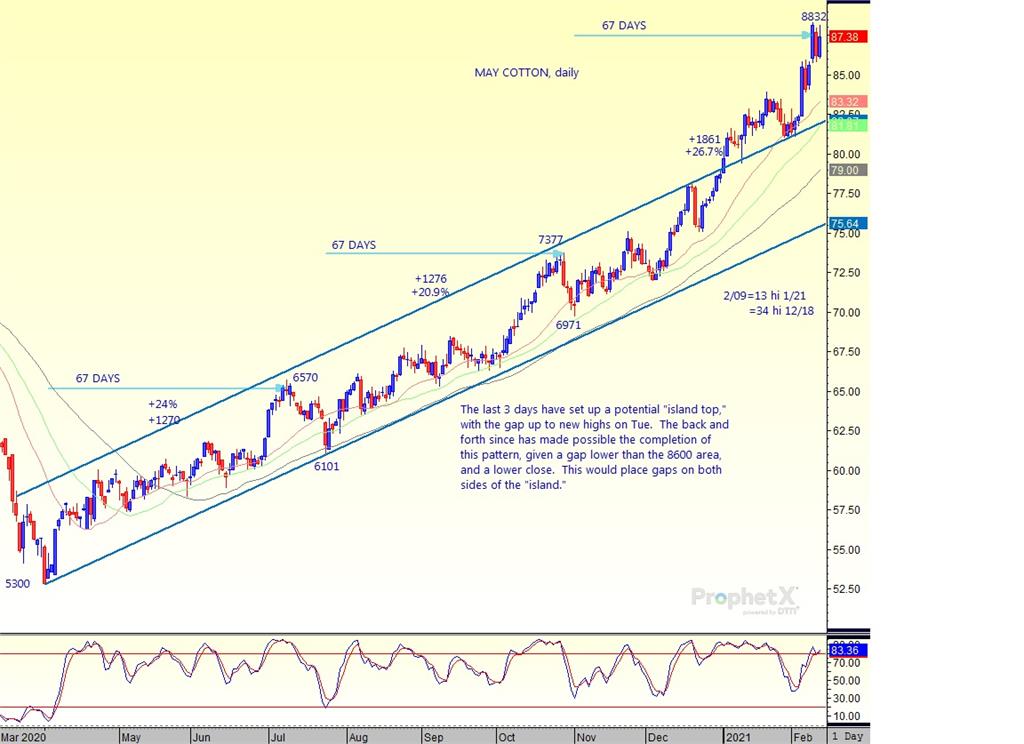