Indian Riddle
India's end stocks will be 500 kb less than last month, according to the USDA/FAS/Gain report.  Consumption was raised 300 kb in 18/19, then consumption was lowered this year by 400 kb, along with a cut in crop size by 600 kb, to arrive at end stocks of "only" 18.9 Mb.  This remains a record by a huge amount, and is a whopping 66% ratio vs use.  This ratio is dwarfed by China's ratio of 94%.  The disappearance of 1/2 Mb gives some credibility to the theory that from 2 to 6 Mb are phantom.

The above paragraph makes it clear why the price of cotton is at 85c, a level that is both rationing to mills, and an incentive to farmers.  Most of the world's cotton is sitting in these 2 countries, that obviously have no issues with paying for carry.  They will have 58% of world end stocks, while the US will have 4.3%.  "It ain't just about how much it is, it is also about where it is," as one old timer said recently.

COT reports show cotton remains at the 70% decile between record long and record short, although this is likely to jump once Thursday's record volume is included, along with Friday's option expiry.  Of note is that the Index Trader's net long is near the 80% decile, before tallying end of week.

Other than the world's end stocks being mostly in other countries, the other larger driving force in the price of cotton is overwhelming public view of higher inflation.  Market Watch, Bloomberg, SocGen, Citi, Ospraie, Merchant Comm Fund, RCMA Fund, Reuters, Vitol, and Gunvor all ran recent stories touting stimulus, deficit spending, and negative rates as proof that inflation will soon soar.  Consensus opinion holds that the end of Corona will prompt a huge worldwide wave of pent-up consumer buying.  As for the report, our US carryout was lowest in the survey, due mostly to a rise in exports.  Two others had exports near 15.5 Mb.  The market is expecting large decreases in end stocks for all the row crops.

Open interest has risen from 212k during the Dec notice to right at 250k last week.  A normal contraction is expected as Mar notice approaches.  The bigger feature was the near-record volume last Thursday, hitting right at 100k.  Cotton has achieved that level 3x previous, all marking major tops.  Very minor support lies at 8275/8260, an intra-day high and low.  Other than that, strong support remains at 7985.  As for resistance, there is a price gap at 8535, but this was left on the Oct contract in Aug 2018, and Oct is not an efficient, highly traded vehicle.  Another target measure is to take the extent of the rally, and pinpoint the halfway mark.  That is 6662, right in the middle of the huge upside price gap on the spot chart made in Oct.  Price is the same below and above the gap. 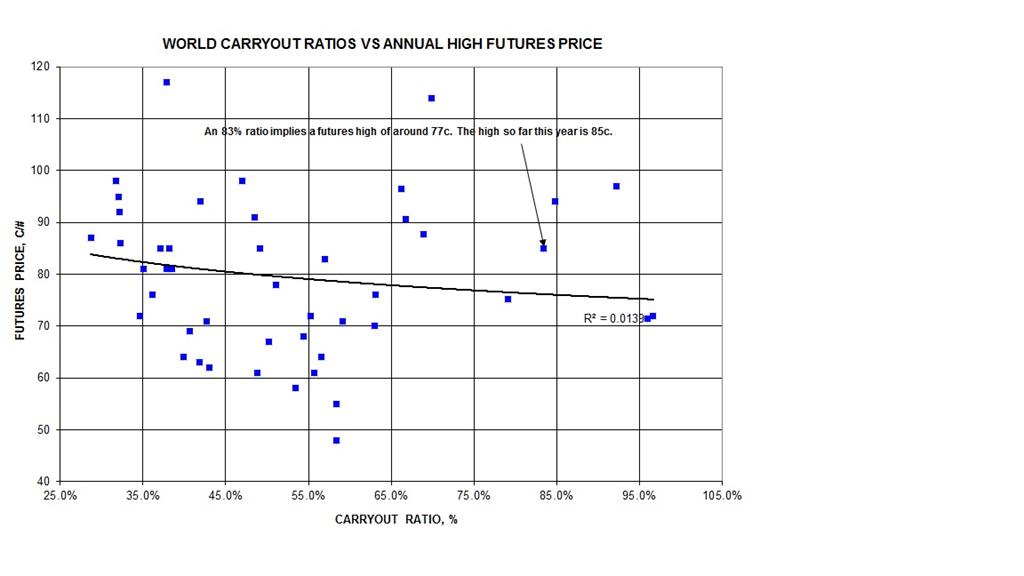 OP: Trading with Blinders On