We all remember the promises for the 2017 Tax Cuts and Jobs Act (TCJA):

1) “Boost growth to 3.5 percent per year on average, with the potential to reach a 4 percent growth rate.”

3) Pay for itself (No increase in the deficit)

4) Give the typical American household around a $4,000 pay raise

Here are a few quotes from 2017:
“This change, along with a lower business tax rate, would likely give the typical American household around a $4,000 pay raise.” Donald Trump, October 19, 2017

“Not only will this tax plan pay for itself, but it will pay down debt,” Treasury Secretary Steve Mnuchin, Sept 2017

“I think this tax bill is going to reduce the size of our deficits going forward,” Sen. Pat Toomey (R-PA), November 2017

And from the Heritage Foundation: The Truth About How Much Americans Are Paying in Taxes.

“the average American household paid about $1,400 less in taxes”

And on GDP, the following table shows quarterly real GDP growth (annualized) from the BEA since the TCJA was signed.   The average growth in the first eight quarters was 2.4% – nothing special – and definitely not the promised “3.5 percent per year on average”.   And basically the same growth rate prior to Trump taking office. 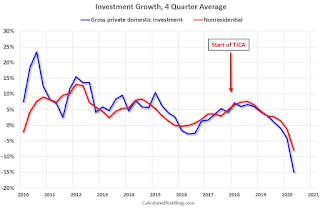 There was a slump in investment in 2015 and 2016 due to the collapse in oil prices, but there has been no discernible pickup in investment growth since the passage of the TCJA.

In fact, Gross private domestic investment had turned negative prior to the impact of the pandemic!

And what about the deficit?

The federal budget deficit was $358 billion in the first quarter of fiscal year 2020, the Congressional Budget Office estimates, $39 billion more than the deficit recorded during the same period last year.

Compare that to December 2017 (before the TCJA):

So the TCJA didn’t pay for itself and caused a significant increase in the deficit.

In summary, there was no discernible boost in investment (investment actually fell). No sustained increase in GDP growth. No $4,000 pay raise. And the TCJA didn’t pay for itself.