Trump says he may not accept election result, in challenge to U.S. democracy | MrTopStep.com
Skip to content
By Steve Holland and Emily Stephenson | LAS VEGAS

Republican candidate Donald Trump on Wednesday would not commit to accepting the outcome of the Nov. 8 U.S. presidential election if he loses, challenging a cornerstone of American democracy and sending shockwaves across the political spectrum.

Trump’s refusal, which his Democratic rival Hillary Clinton called “horrifying,” was the standout remark of their third and final debate and ratcheted up claims he has made for weeks that the election was rigged against him.

Asked by moderator Chris Wallace whether Trump would not commit to a peaceful transition of power, the businessman-turned-politician replied: “What I’m saying is that I will tell you at the time. I’ll keep you in suspense. Ok?”

Trump’s statement may appeal to his anti-establishment followers, but it was unlikely to reverse opinion polls that show him losing, including in key states that will decide the election.

“That is not the way our democracy works,” Clinton said during the debate. “We’ve been around for 240 years. We’ve had free and fair elections. We’ve accepted the outcomes when we may not have liked them. And that is what must be expected of anyone standing on a debate stage during a general election.”

Later she told reporters: “What he said tonight is part of his whole effort to blame somebody else for where he is in his campaign.”

In financial markets Mexico’s peso currency, seen as a measure of Trump’s prospects, rose to its highest level in six weeks at the end of the debate, suggesting growing investor confidence of a Clinton victory. Trump has vowed to build a wall on the border with Mexico to keep out illegal immigrants and has said he would make Mexico pay for it.

Mainstream Republicans were quick to denounce the comment. U.S. Senator Lindsey Graham, a former Republican presidential candidate who has never warmed to Trump, said: “If he loses, it will not be because the system is ‘rigged’ but because he failed as a candidate.”

Neoconservative Bill Kristol, editor of The Weekly Standard political magazine, tweeted: “I deplore what Trump said and refused to say about accepting the election results. Confirms one’s judgment he shouldn’t be president.” 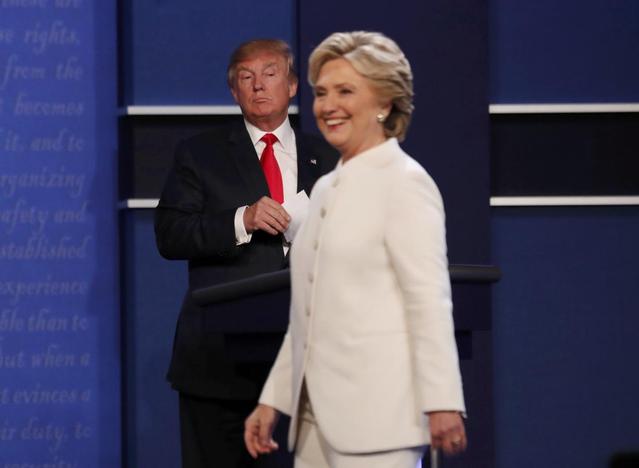 Trump campaign manager Kellyanne Conway on Thursday defended the comment in a round of television interviews, saying he was “putting people on notice” about voting irregularities.

“We’ll have to see what happens,” she told ABC News, adding that Trump “was willing to accept the election absent widespread fraud.”

Trump’s running mate, vice presidential nominee Mike Pence, said Trump “will accept the outcome” because he is going to win.

“You have to accept the results of the election unless there are grounds for a recount and at this point it does not appear that we’re heading for a close election,” he said.

Democratic vice presidential nominee Tim Kaine, in a series of TV interviews on Thursday, blasted Trump’s stance as “shocking” and a threat to American democracy.

In a debate that for the first time focused more on policy than character, the two candidates nonetheless lashed out at each other.

Trump, 70, called Clinton “such a nasty woman,” accused her campaign of orchestrating a series of accusations by women who said the businessman made unwanted sexual advances and said that both she and President Barack Obama, her fellow Democrat, were behind disturbances at his rallies.

He said the Clinton Foundation was a criminal enterprise and as a result she should not have been allowed to seek the presidency.

Clinton, 68, said Trump himself had incited violence, belittled women and posed a danger to the United States. She said Trump had in the past also complained that his TV show was unjustly denied a U.S. television Emmy award.

“I should have gotten it,” Trump retorted.

Trump said all of the stories of sexual misdeeds were “totally false” and suggested Clinton was behind the charges. He called her campaign “sleazy” and said, “Nobody has more respect for women than I do, nobody.”

Clinton said the women came forward after Trump said in the last debate he had never made unwanted advances on women. In a 2005 video, Trump was recorded bragging about groping women against their will.

“Donald thinks belittling women makes him bigger. He goes after their dignity, their self-worth and I don’t think there is a woman anywhere who doesn’t know what that feels like,” said Clinton, the first woman to win the nomination of a major U.S. political party.

The two candidates also had a spirited exchange on abortion, gun rights and immigration during the showdown.

Clinton said she would raise taxes on the wealthy to help fund the U.S. government’s Social Security retirement program. She said Trump, who Forbes says is worth $3.7 billion, would be paying higher taxes too unless he can get out of it.

“Such a nasty woman,” Trump said.

Clinton and Trump walked straight to their podiums when they were introduced at the University of Nevada, Las Vegas, once again forgoing the traditional handshake as they did at the second debate last week in St. Louis, Missouri. This time they did not shake hands at the end of the debate either.

The two candidates are scheduled to meet again later on Thursday night at a charity dinner in New York.

Read this article in its original format at Reuters.com