Brief Update: Nikkei erases all gains going into the close, closing up 1.71 points at 14,425, after touching a session high of 14,561. S&P Futures (ES) are down -1.15 handles at 1681.25, but off the session low of 1679.75 which we saw during the Obama presser, in which he postponed the congressional vote, as he has been officially been made out to look like a moron, losing international and domestic credibility, and not being able to get the votes needed. So for now, it looks like the Syrian Attack has been put on hold, making the FOMC meeting the next big hurdle for the markets. 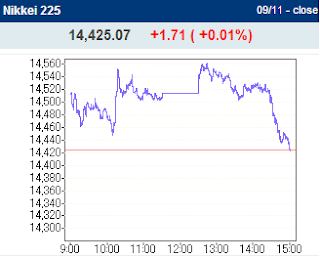