Did you write off the NASDAQ 1999 analogy? 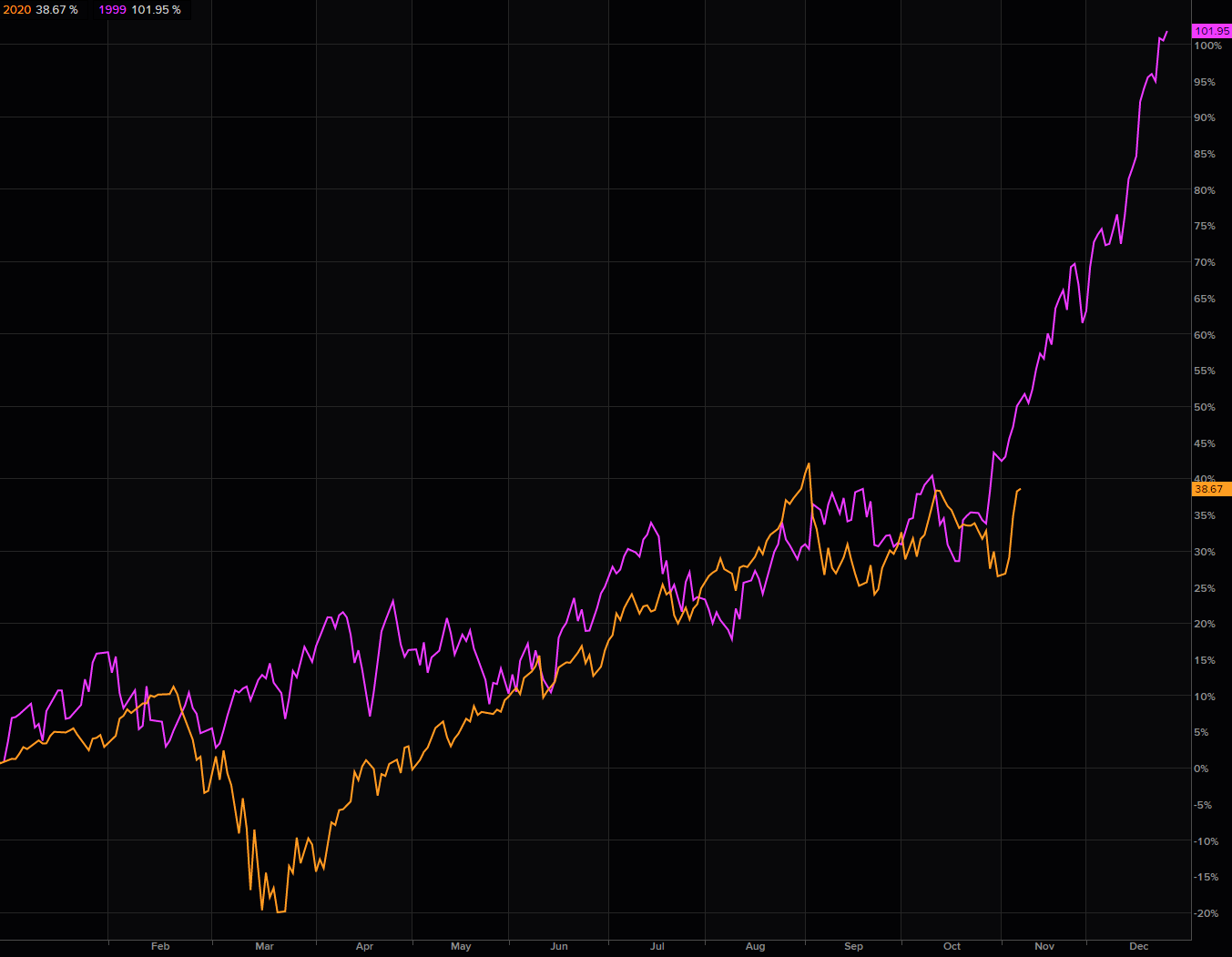 How the Central Banks are easing again

The two real bull argument for financial assets are that (1) the CB easing wave will continue much longer than COVID 2nd wave and (2) it does not matter who is in the White House because Powell is President.

The Second Wave of QE has begun

The two real bull argument for financial assets are that (1) the CB easing wave will continue much longer than COVID 2nd wave and (2) it does not matter who is in the White House because Powell is President.

Yes – it is so important that we wrote it twice. 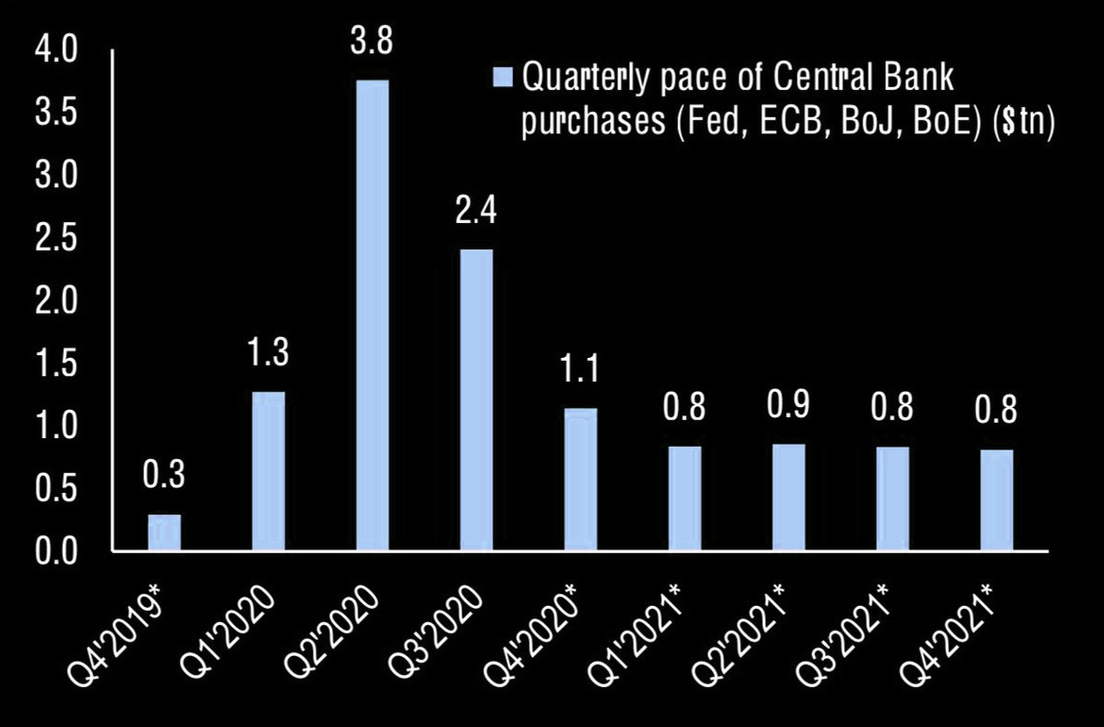 If you like Bitcoin here, maybe you should love gold here (as well/instead)

There are many rationales for the long Bitcoin trade. We leave all those arguments to pundits to discuss, but if Bitcoin and gold have some similar features when it comes to the QE logic, the imploding USD etc, the relative long gold logic looks like it has some catch up potential.

"the potential long-term upside for bitcoin is considerable if it competes more intensely with gold as an “alternative” currency we believe, given that Millennials would become over time a more important component of investors universe".

That is of course a generational play, older people like gold, younger Bitcoin, but that is the longer term view.

Should the above occur with time JPM notes:

"Mechanically, the market cap of bitcoin would have to rise 10 times from here to match the total private sector investment in gold via ETFs or bars and coins."

The PayPal news in October reignited Bitcoin's momentum, but just as we have seen in many other assets, options and futures volumes have surged (chart is pre this last squeeze). There is probably some healthy retail gamma pushing Bitcoin higher…

Do you chase Bitcoin that trades at 50-60% vol here or do you go for the slightly "older" trade in gold at around 20% vol? 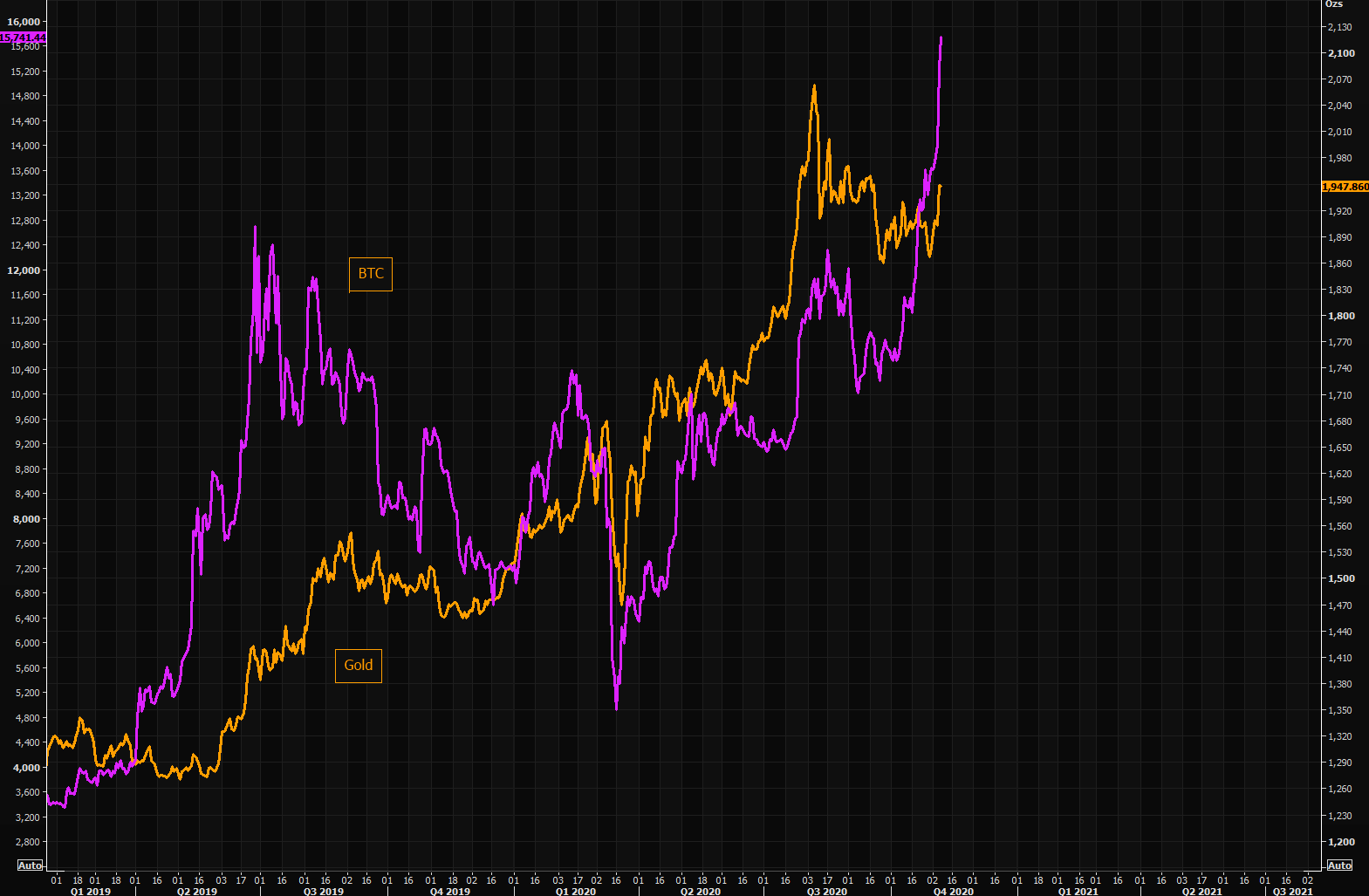 Maybe it is just a short squeeze

Hearing from several trading desks that there is an absence of long only activity, both in single stock and program trades / futures buying. There is no real sense that the long-only community (real money) are chasing the moves higher and if anything are still cautiously trimming in pockets.

The crowd chasing the tail (but not the "real" tail)

One of TME's main logics over past months is that markets are stuck in a range and need to sober up before any new meaningful direction can take place.

The crowd trades with a lot of "feelings" but do you realize SPX is at the same levels we traded at in late August as well as in mid October?

Narratives are changing rapidly, but we find no narrative strong enough for markets to take new directions, at least not yet (see the SX5E range).

Recall in late Aug everybody saw the break out, in late Sep people all saw the break down, after the bounce in Sep, the crowd saw another break out in the making in October that was a few weeks later labelled as the double top that was going to break down pre elections. At that time we asked ourselves, yet again, if the double top was indeed a double bottom. It proved to be a double bottom that took us to current levels. Over past 24 hours we have receive several emails pointing out the break out trade here.

We are not sure we would buy into that logic post the latest surge. Pushing break out momentum trades in mean reversion is very expensive… 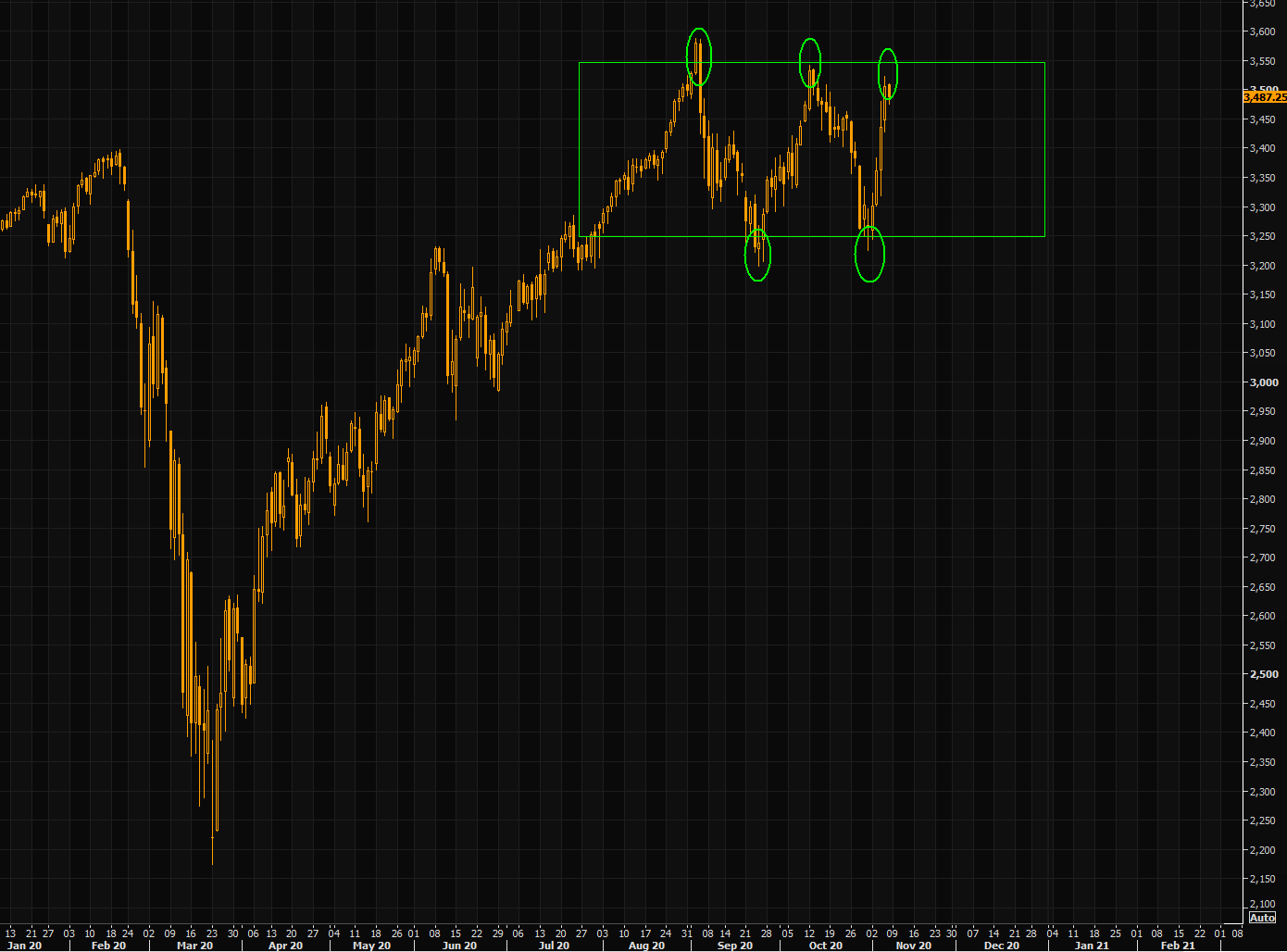 Yes, it could unfortunately be the reality by Christmas. It took eight months for new cases to reach 100K per day, but it will take only three more weeks, until Thanksgiving, to reach 200K per day. By the end of the year, cases will be running at about 500K per day.

To reach 500K cases per day by yearend,

the numbers just need to keep rising at their current pace. Covid loves cold weather hence the June/July outbreaks in meatpacking plants, where it's always winter—so it's easy to imagine even faster growth in cases 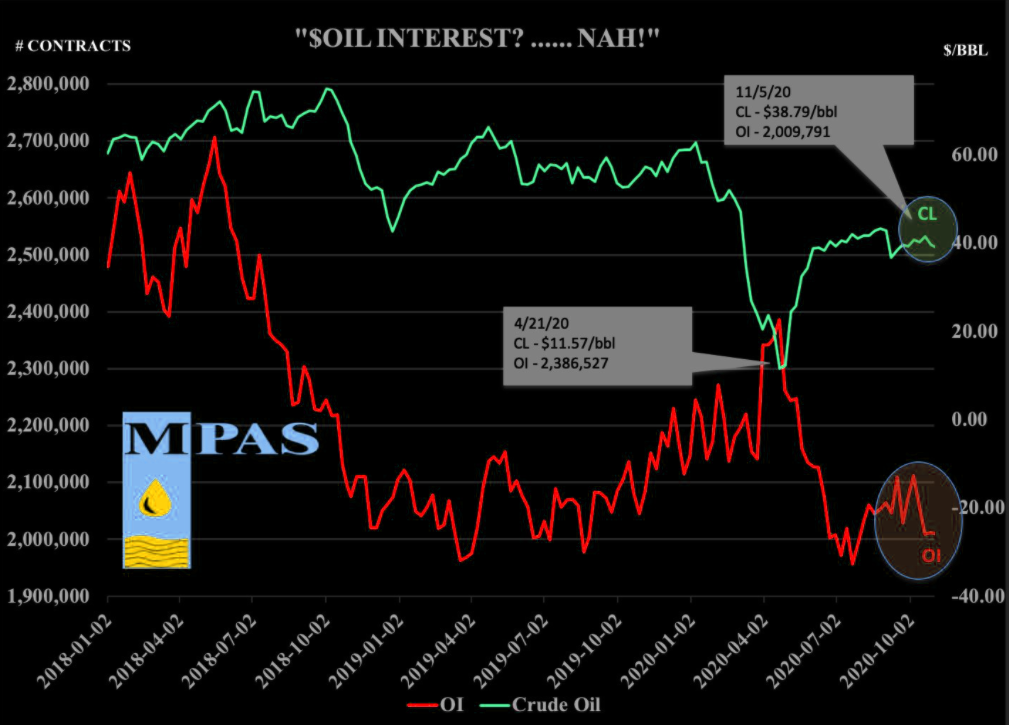 Oil seems to dislike the latest move/narrative in yields. We still see oil as a non trending asset for now, and as we pointed out yesterday:

"Oil and equities have moved in tandem since October, but oil refuses getting as excited as equities over past 24 hours."

After all we still have not found any direct long oil contract in Fed's "book". 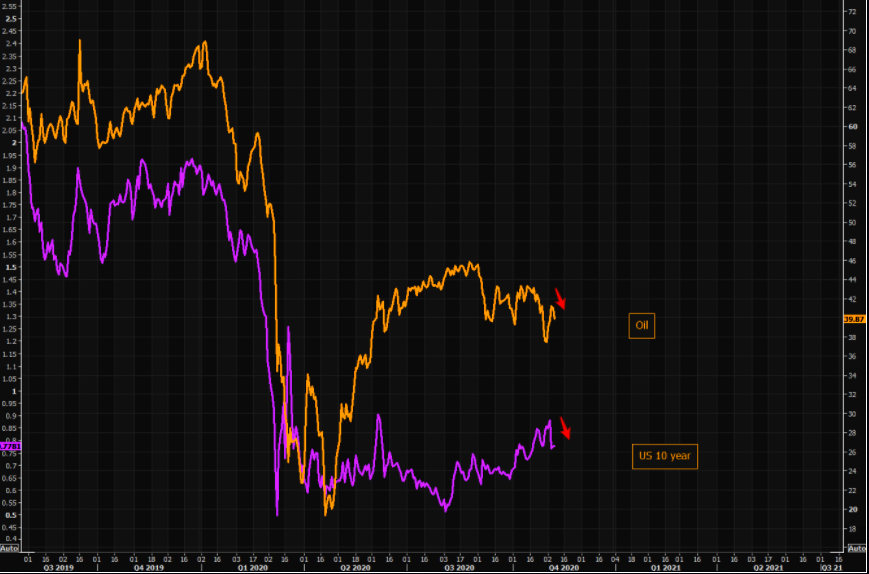 US 10 yr break evens are down from recent highs, but the gap vs oil since late August has continued to widen.

In a WFH world we need less oil, but seems people believe inflation will come from other "sources"…

That monetary policy easing has been expanding since the GFC is of course no news. It is anyhow always fascination to see it graphically – especially vs 2008 GFC crisis. 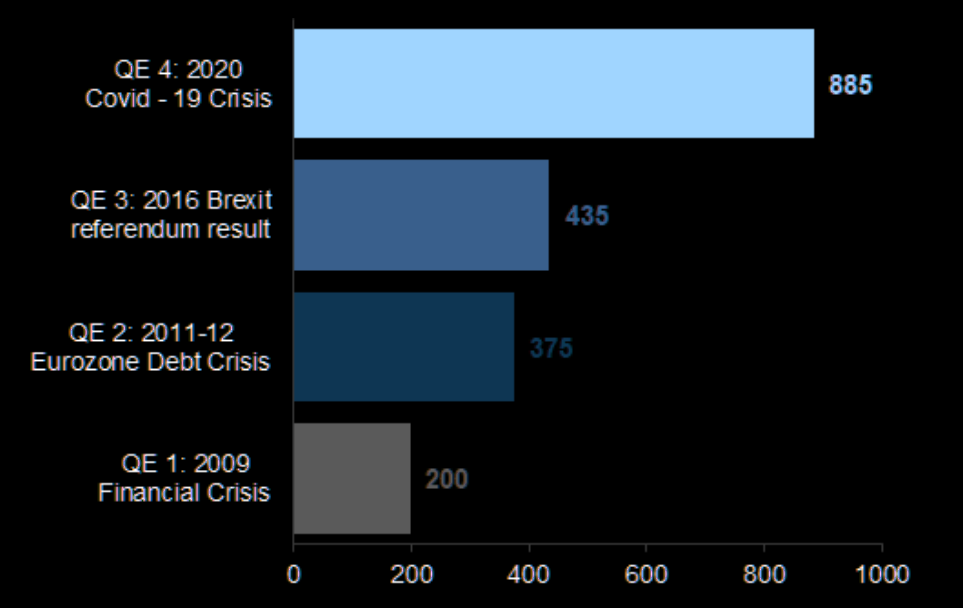 Latest data from JPM Prime Brokerage as of today shows both gross and net exposure levels at 100%-tile (since Jan-2018). 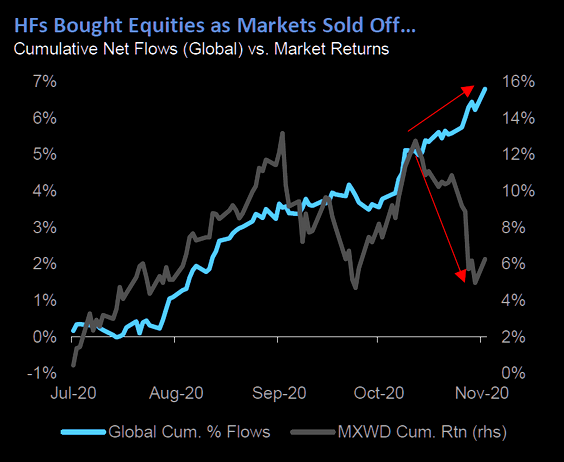 VIX – from explosion to implosion

As we have written many times, big books hedge in VIX. Pre elections "fear" had the VIX surge, both absolutely and relatively speaking. The heavy VIX hedging saw VIX "spread out" versus EM VIX, VXEEM, by a big margin, but this has now partly come in (see the spread in the chart).

VIX is definitely getting more normal post the elections… 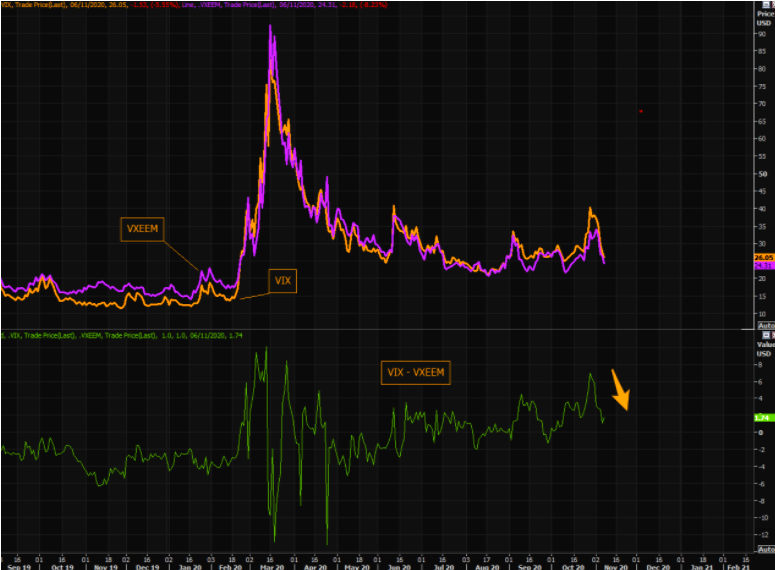 Under the hood stress at lowest levels since mid August

Majority of people look at the simple VIX index, which does not tell you the real story of fear. As we pointed out pre elections, the 2/8 months VIX futs spread did not show extreme fear going into elections. The spread has fallen in sympathy with global vols coming down, but note it is below recent lows, trading at Aug levels. 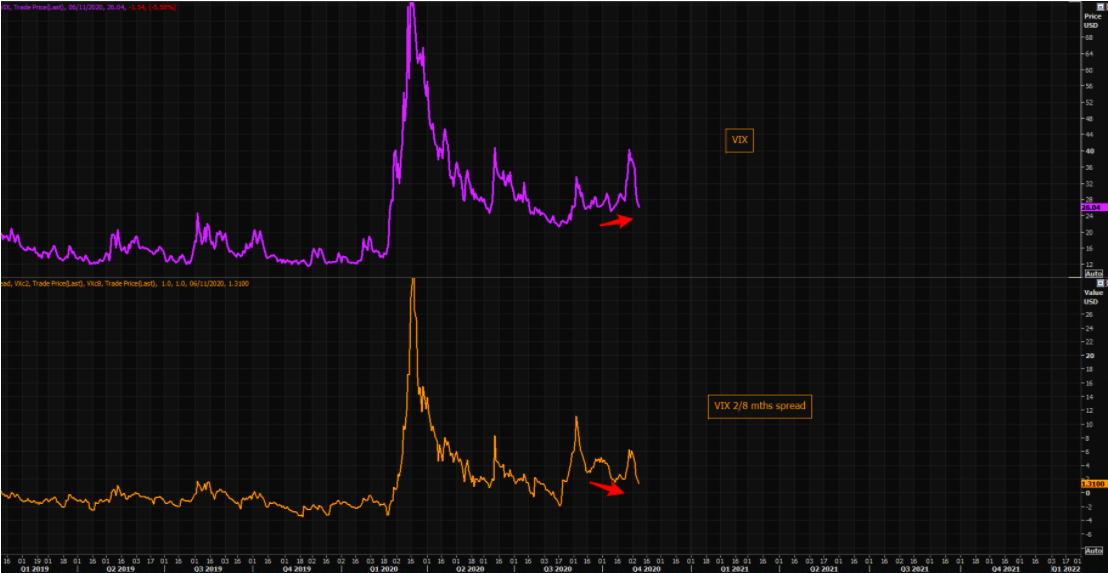 Shift lower across the curve, especially the short end is getting properly sold.

Recall, November is not a strong VIX month… 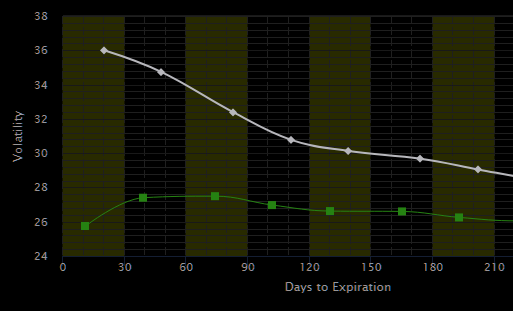