There will be significant equity selling into month-end

S&P 500 futures have o/p 10Y UST futures by c.9% – which we’ve only seen at this point in the month 6 other times since 2000 (and never since Dec 2010). In those 6 instances, Equities underperformed Treasuries over the 5 trading days into month end. Heading into Nov month end, QDS’ Pension Rebalancing Model suggests c.$50bn of global equity outflows.

Remember that GS estimates $36bn – the 4th largest monthly sell estimate on record going back to 2000 and ranks in the 96th percentile amongst all buy and sell estimates in absolute $ value.

And lastly, JPM from Thursday: "We see some vulnerability in equity markets in the near term.from balanced mutual funds, a $7tr universe, having to sell around $160bn of equities globally to revert to their target 60:40 allocation either by the end of November or by the end of December at the latest"

Chart: maybe rally on halt as S&P once again is back in the "box". 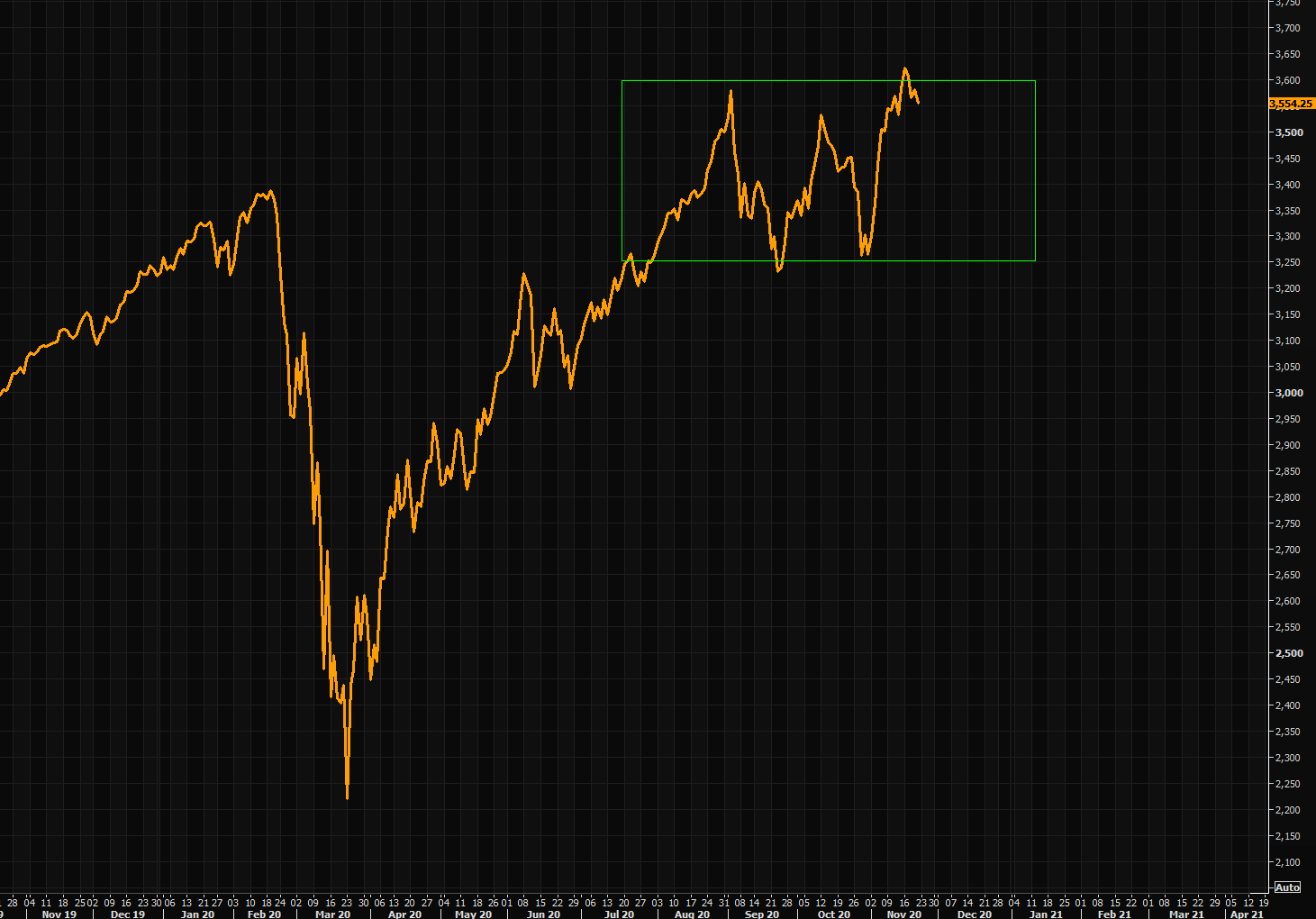 US 10 year vs Dr Copper gap becoming rather wide…or can they both be right? 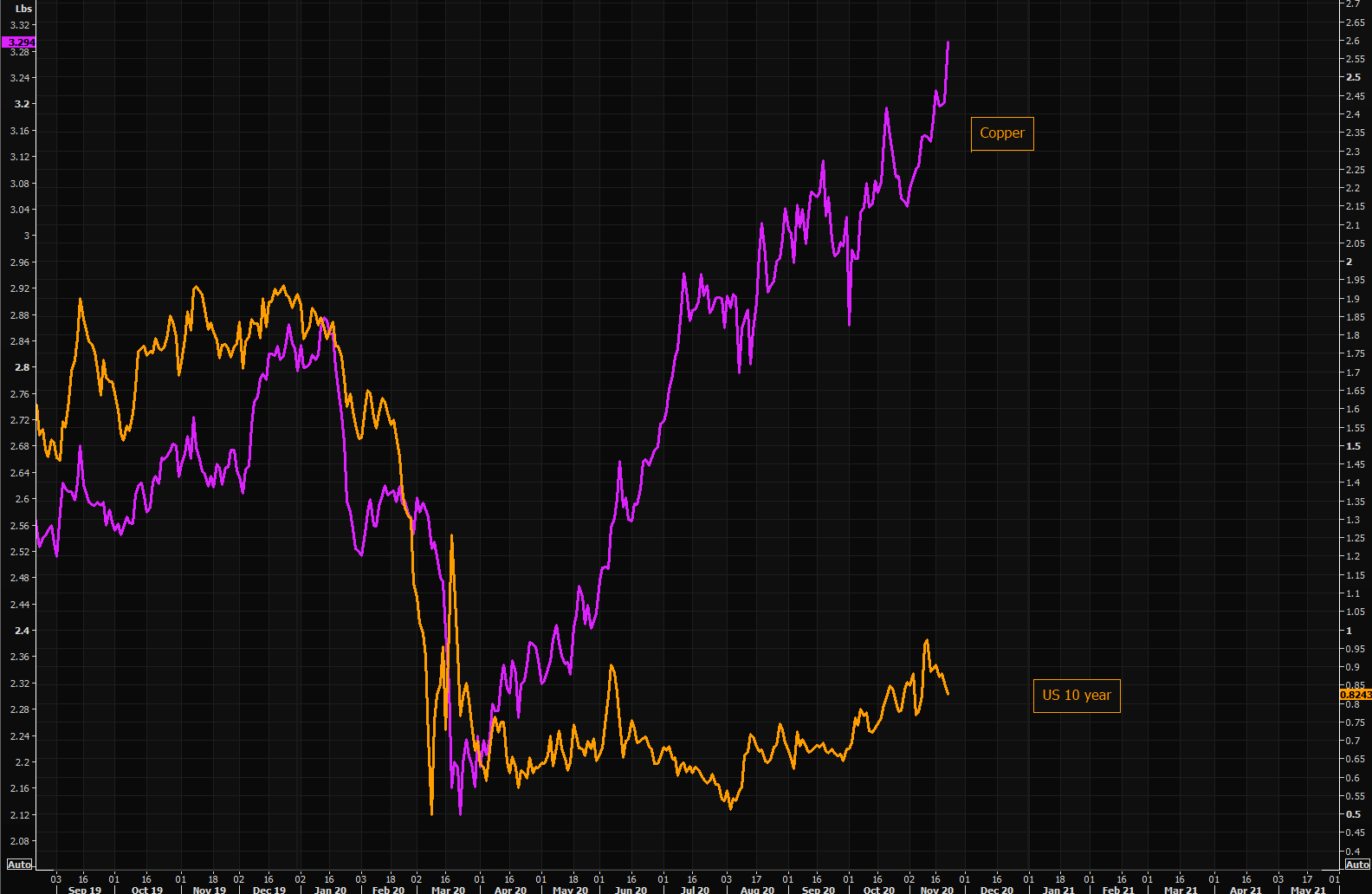 Oil – under the hood speculators

Net long positions across the complex (CL/ULSD/RBOB) are rising, up +68k contracts or about +14% in the last 2 weeks, looks impressive but when you look under the hood over +59k or 87% of that rise is just speculative short-covering offset by commercial selling, producers seem more than happy to let the specs own oil at multi-month range highs. Further while flat spec CL long positions look to be in "dry powder" range when the position is viewed against open interest it is far from a screaming buy. Money flows confirm other signals that this is a weak price advance that should be treated with caution especially with prices near range highs… 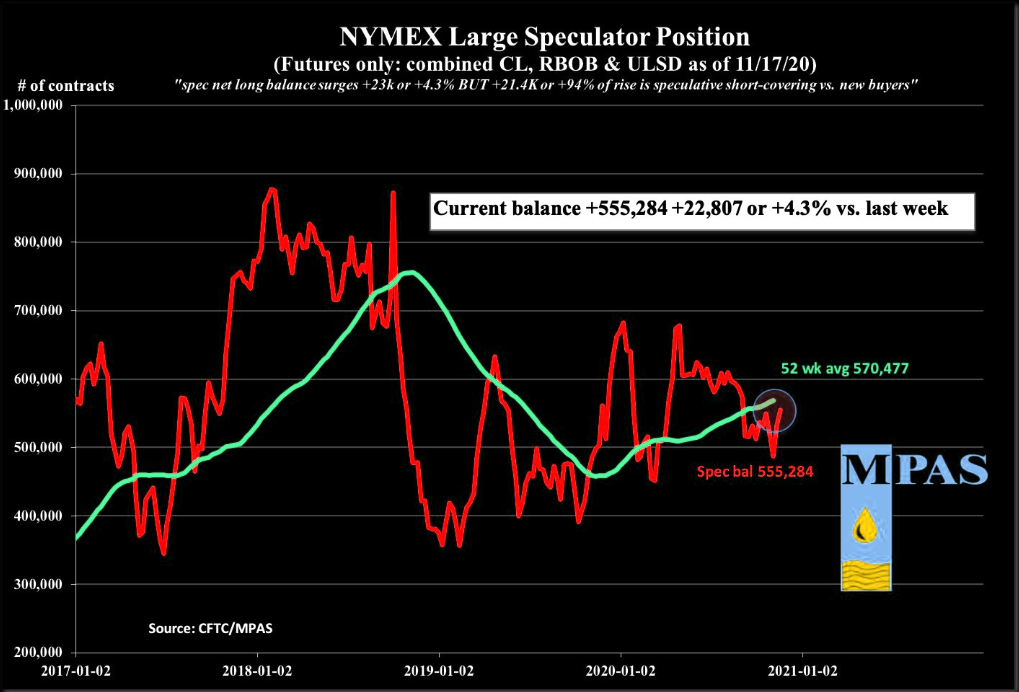 Be a hedge fund VIP stock

The top stocks (most commonly held among hedge funds) have performed remarkably well this year. The individual holdings below. 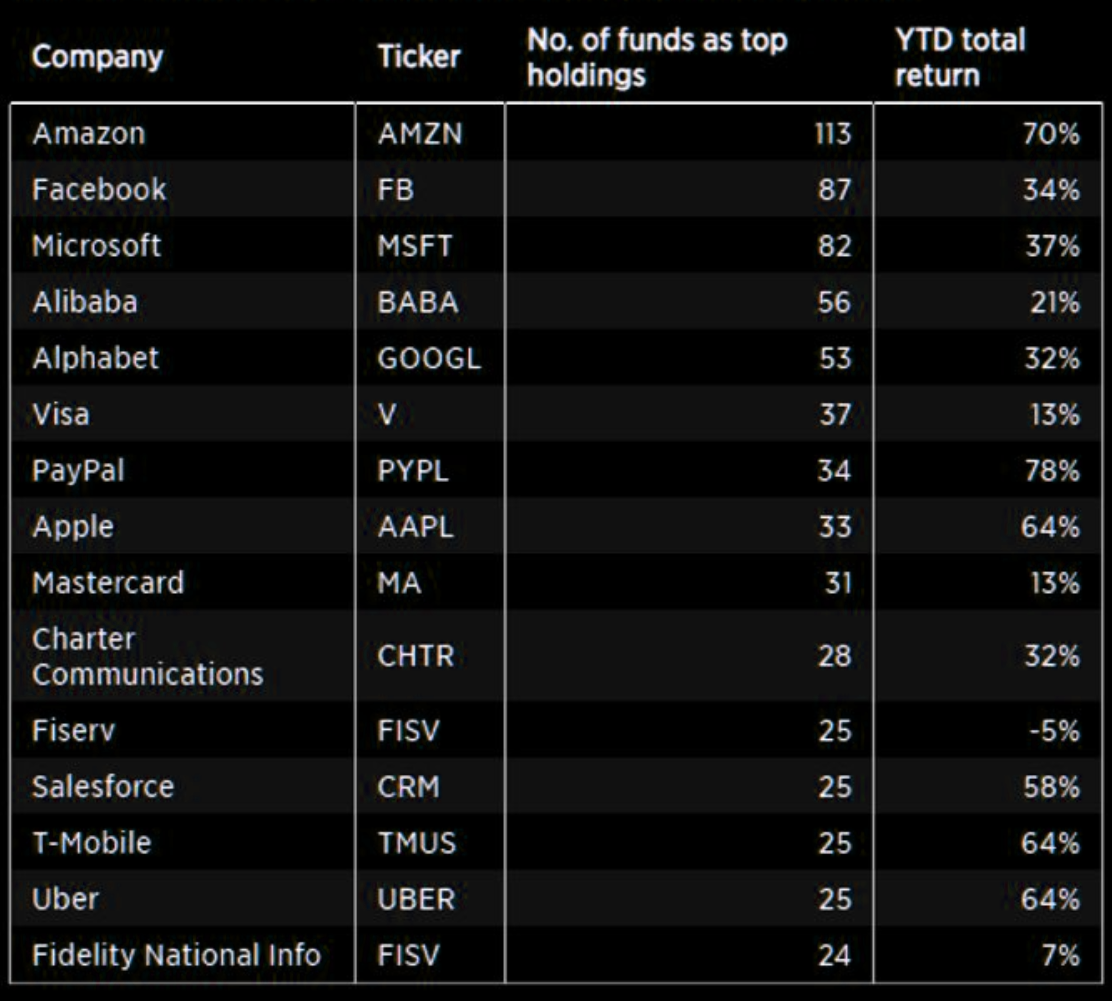 Bitcoin; sometimes it goes down

Maybe now time to start thinking about the draw-down profile of Bitcoin. The last one was 84%. 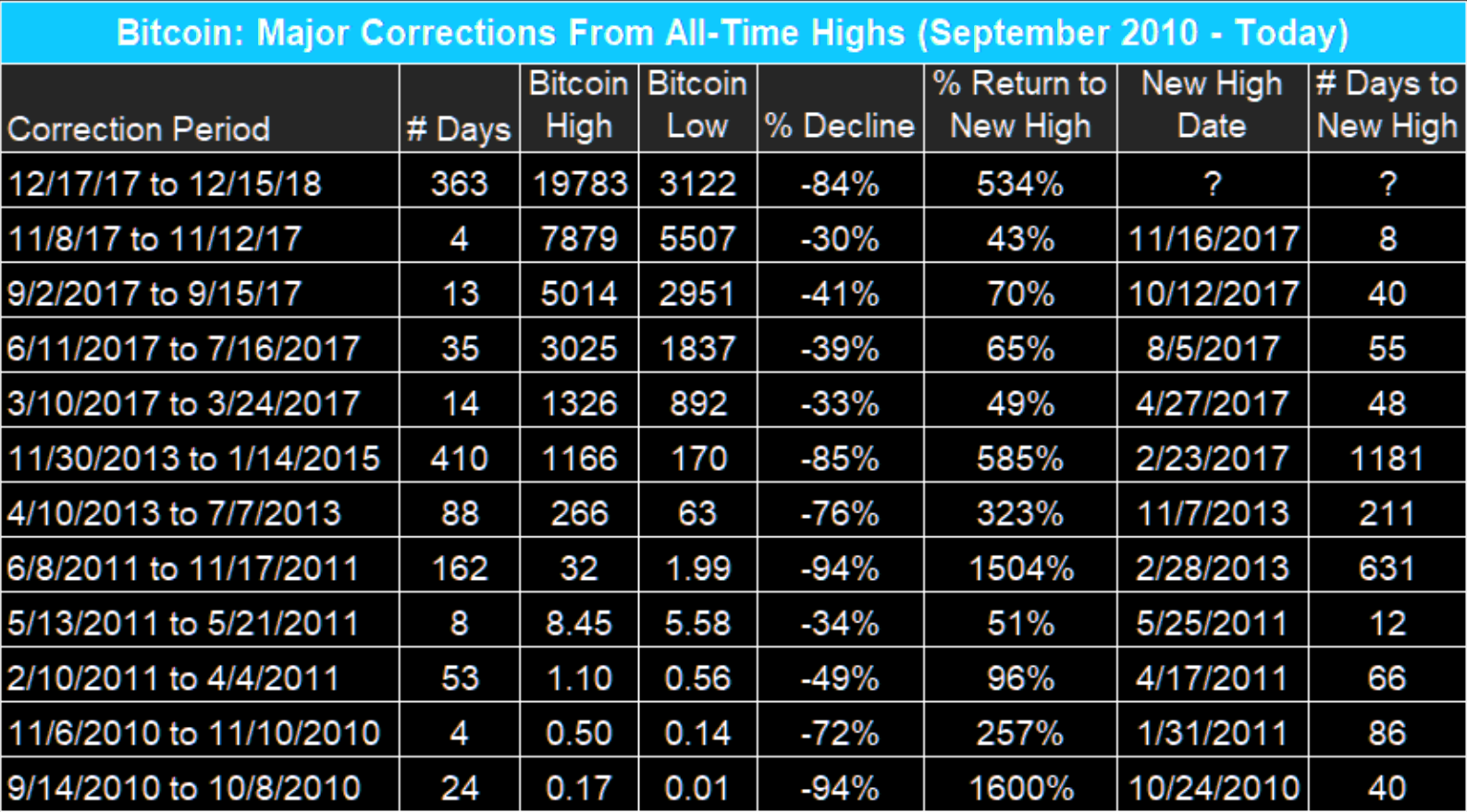 How low is realized volatility?

Vols have crashed but just how low is realized volatility?

As GS points out:

Do note that close to close realized vol has been several points lower than if measured during earlier times during the day from Nov to date. GS concludes, "we would expect a near-term decline in realized volatility to be accompanied by rising volatility risk premium."

Obviously it matters when you hedge, so if nothing, always a good excursive, run a long gamma and a short gamma book versus yourself in order to "feel" the hedging. 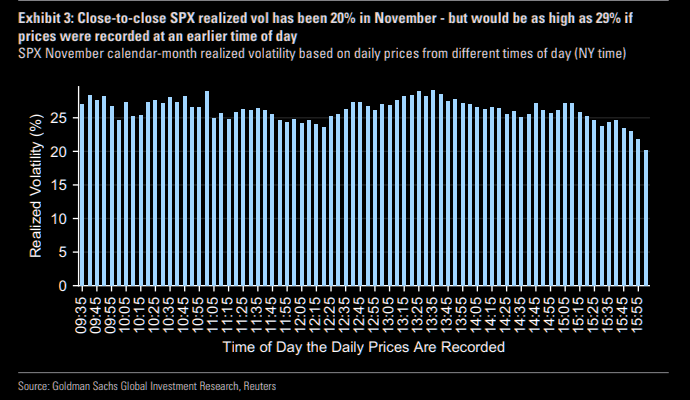 GS outlines what we have been pointing out over past weeks. EEM volatility is rather cheap in comparison to SPX. Just over the past week, the spread has come in some, but EEM optionality remains relatively cheap.

Second chart showing the longer term EEM vs SPY ratio. If EM is to revive, it has some relative potential, and we would play if via relatively cheap options plays. 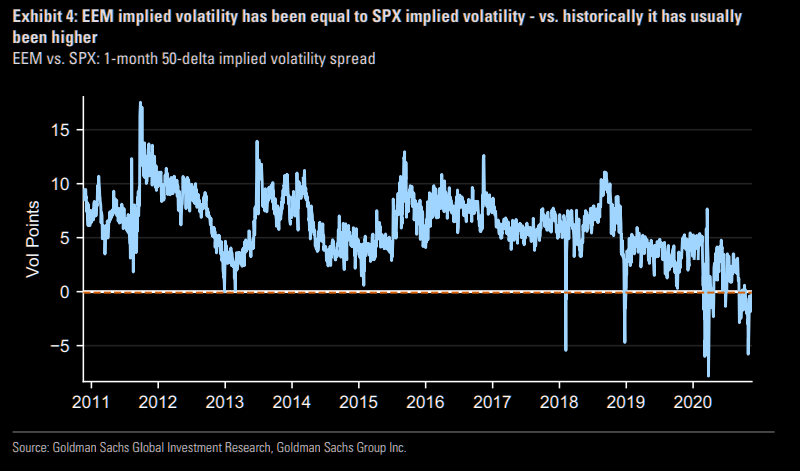 You know these market cap comparisons of TSLA vs the auto sector? Forget about those, they are so Model S – from now we will do it versus the world.

If added today, TSLA would rank as the 8thlargest S&P 500 constituent

"Real" 10 year US treasury rate (10 year rate minus inflation expectations). Can we go lower than "peak FED" earlier this year? 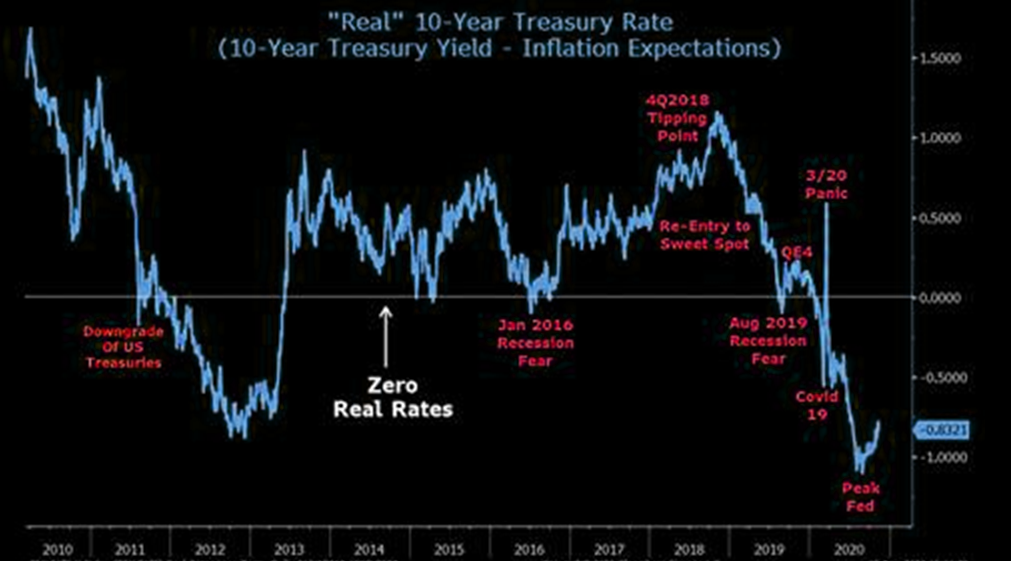 Whatever happened to inflation?

Consensus seems the vaccine is approaching quickly and some assets have continued surging on the bullish vaccine news. Rotation and reopening has seen copper extend the move higher, but this time it is leaving inflation expectations behind…

Dr Copper vs US 5 yr breakevens. 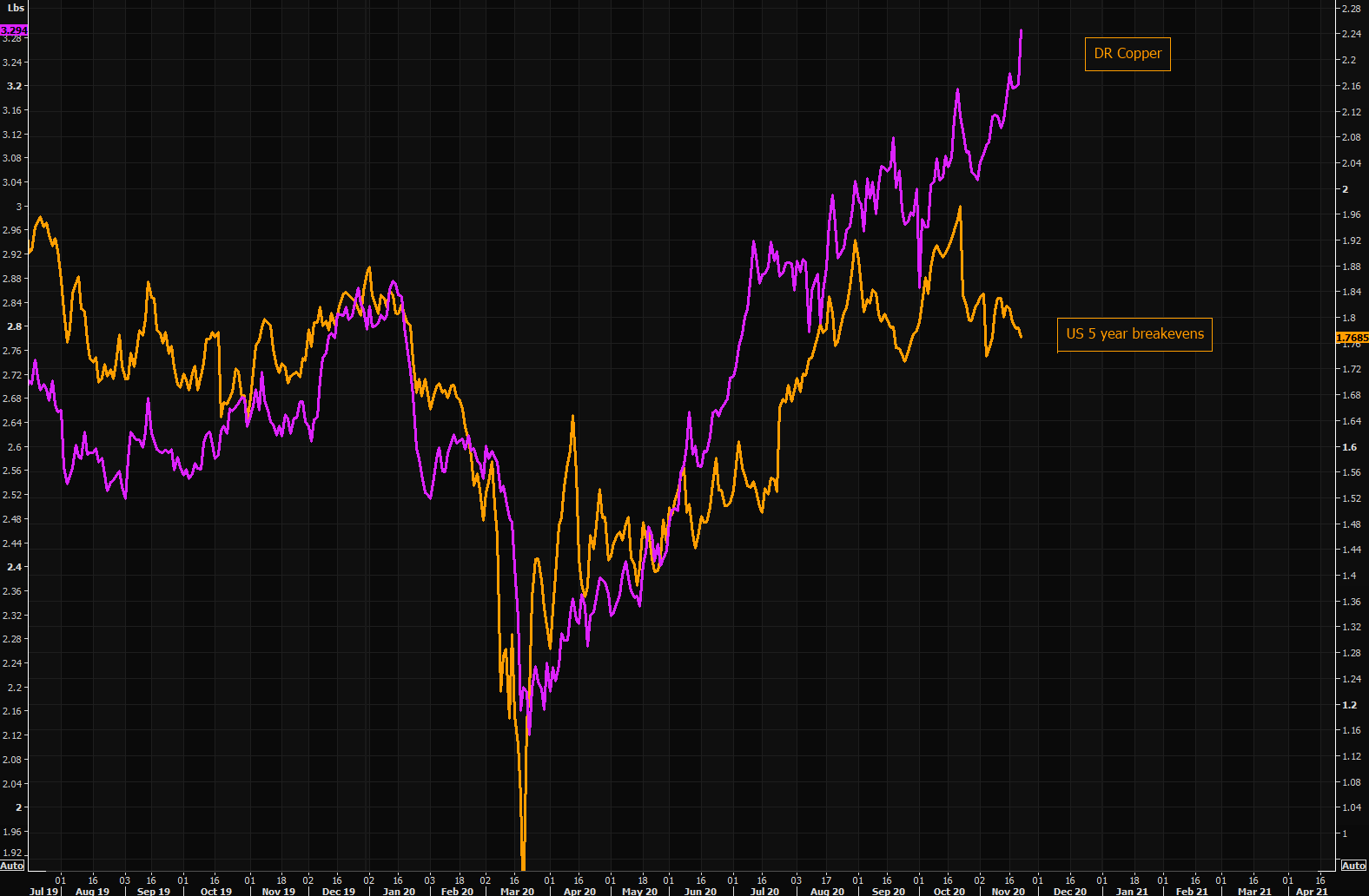 Tech is a "duration" play? 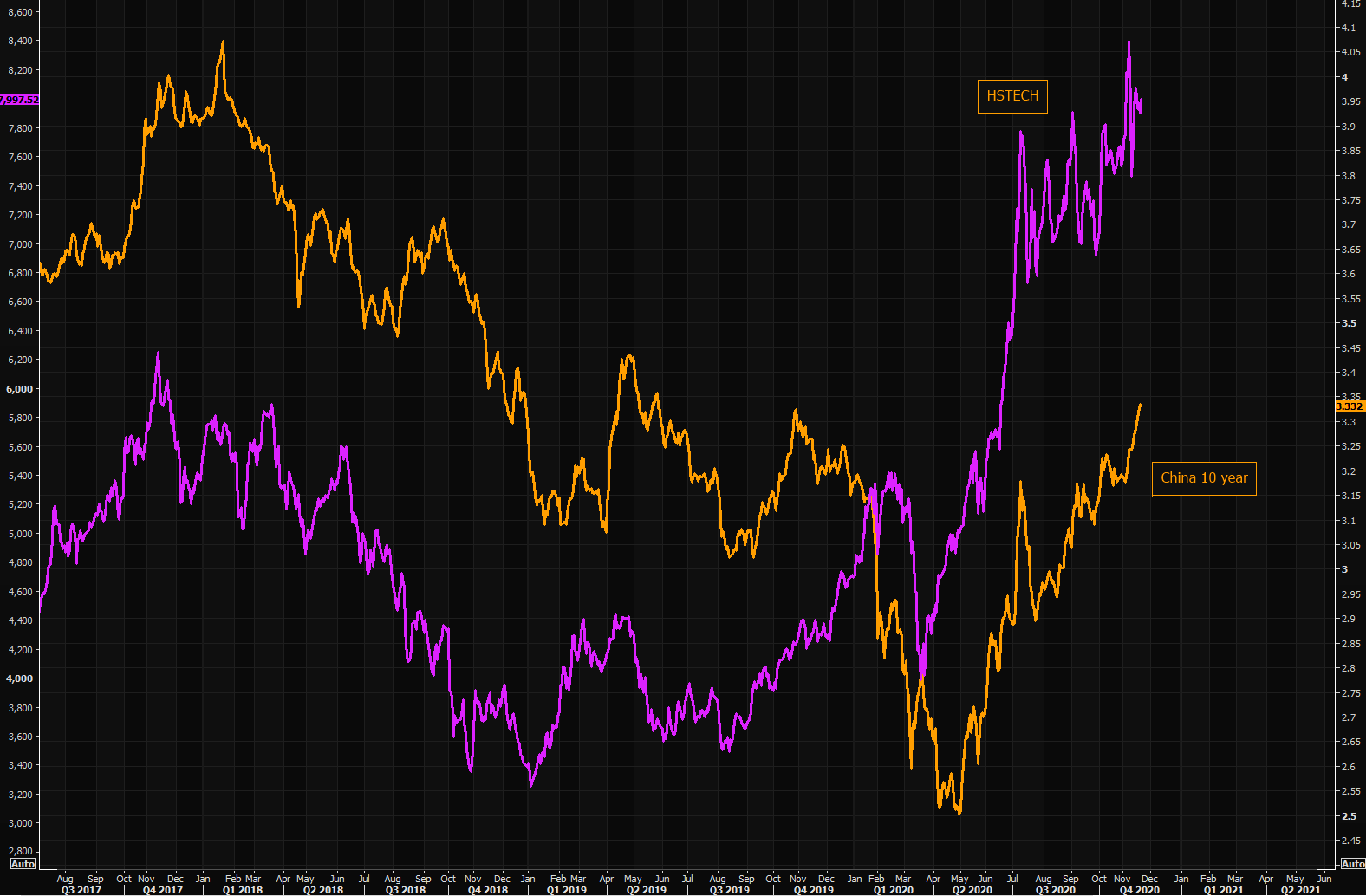 India COVID now ticking up again. Looks like 2nd wave will happen. Chatter over the weekend that Brazil will close for real later this month. Conclusion: global COVID cases will continue to increase even though Europe seems to have peaked. 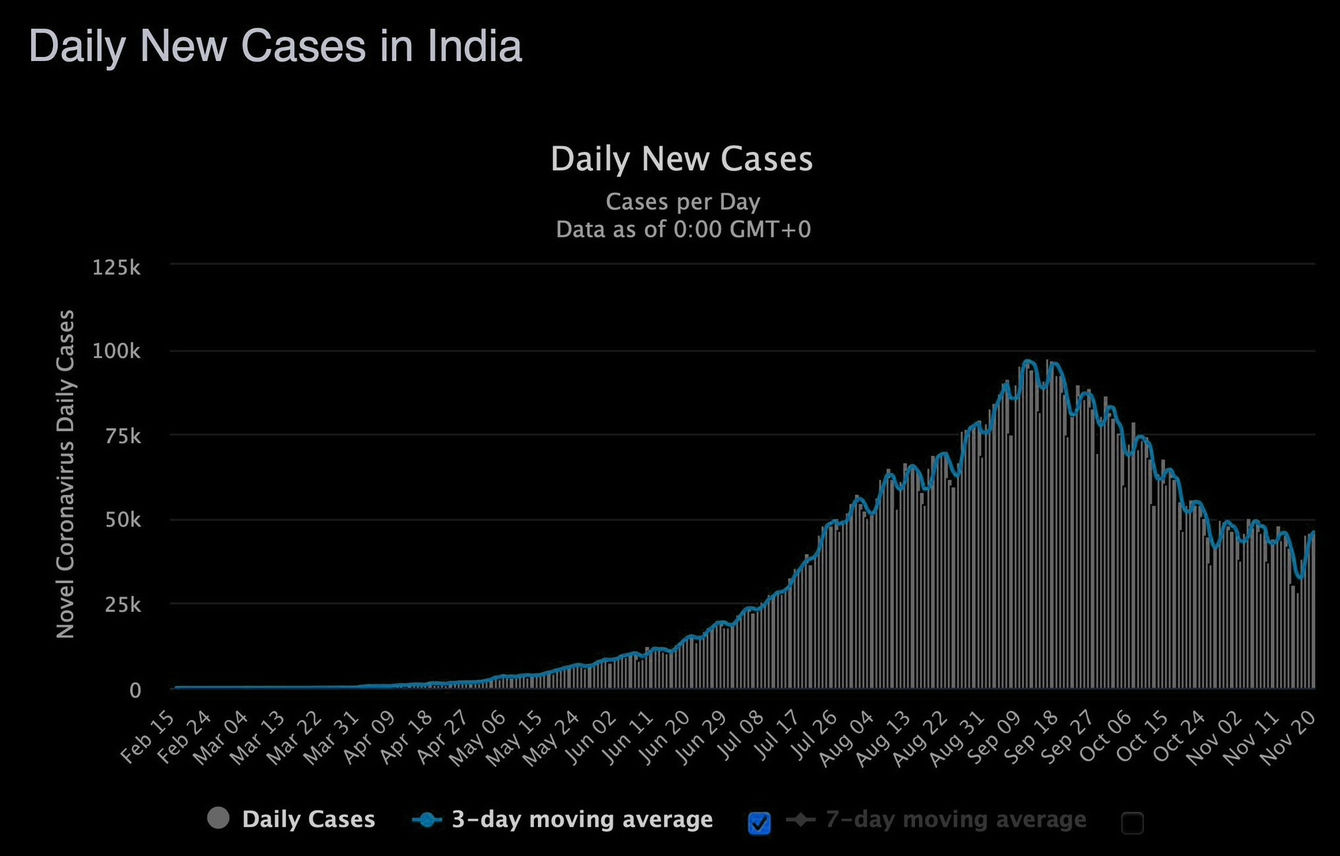 Mnuchin's drama not so dramatic

Pretty much muted market reaction to the Mnuchin vs Fed latest "conflict". The new incoming Treasury secretary can change the situation, so this is nothing overly huge, and most probable just a way to annoy the new administration. As Nordea points out, Mnuchin's decision to end the corp credit facilities could well end up Fed going for the big operation twist and more asset purchases. Read across could be the relative long EM trade that started working recently;

"The resurgence of EM FX has continued through the week, maybe as Mnuchin’s Care Act tricks make an aggressive Operation Twist from the Fed more likely in December. EM should be on the receiving of flows should the Fed decide to bring down the yield curve artificially in December (again)".

Just as Nordea points out;

"The cyclical backdrop is much stronger today than in 2011-2012 when the first Twists were conducted"…just look at that PMI chart.

A possible quick move higher in US 10 year would not bode well for the EM space, but the investment bank points out accurately;

"The Fed is substantially less likely to allow such curve steepening to happen fast today than in e.g. 2016-2017, why a more managed or smoothened move higher in the long end is the most likely outcome".

On the other hand, pros predicting the US 10 year has worked so so (chart 3). 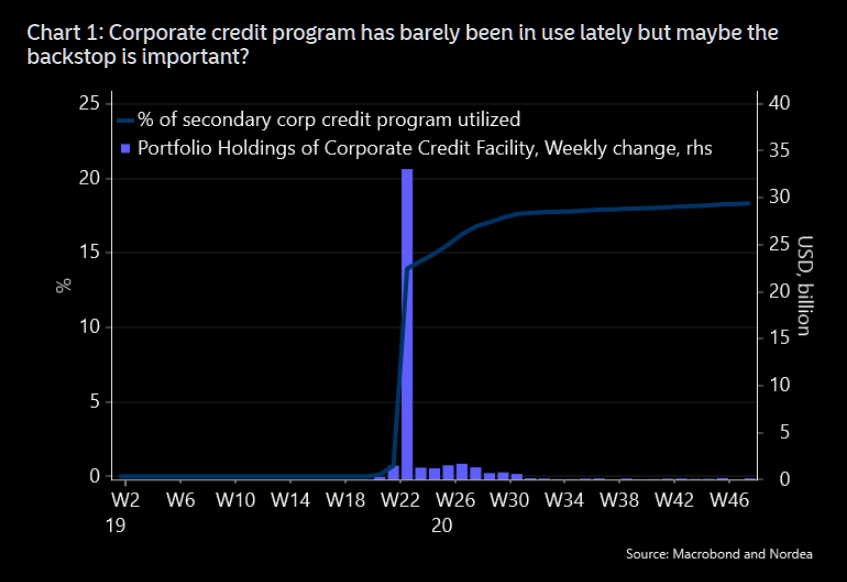 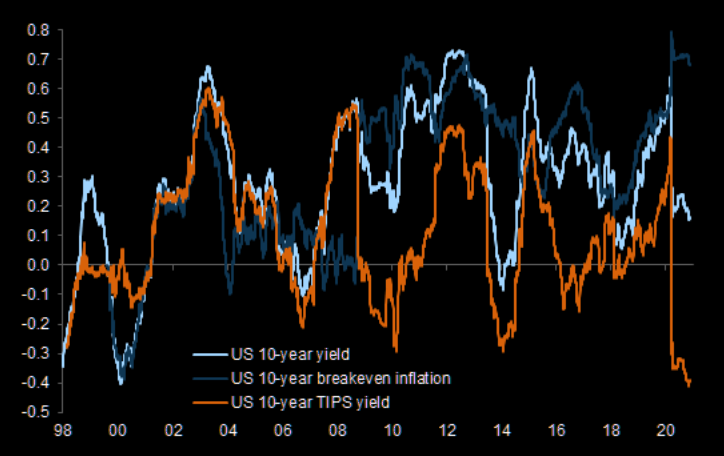 Small caps – a star is born?

The IWM vs QQQ ratio has shot up higher recently. It is basically a big trade on US real yields, so watch the "relationship" closely between "all these" moving together.

What is noteworthy is the fact everybody loves the small caps space these days over tech, but still pouring money into tech (chart 2)…and/or is everybody positioned the wrong way still? 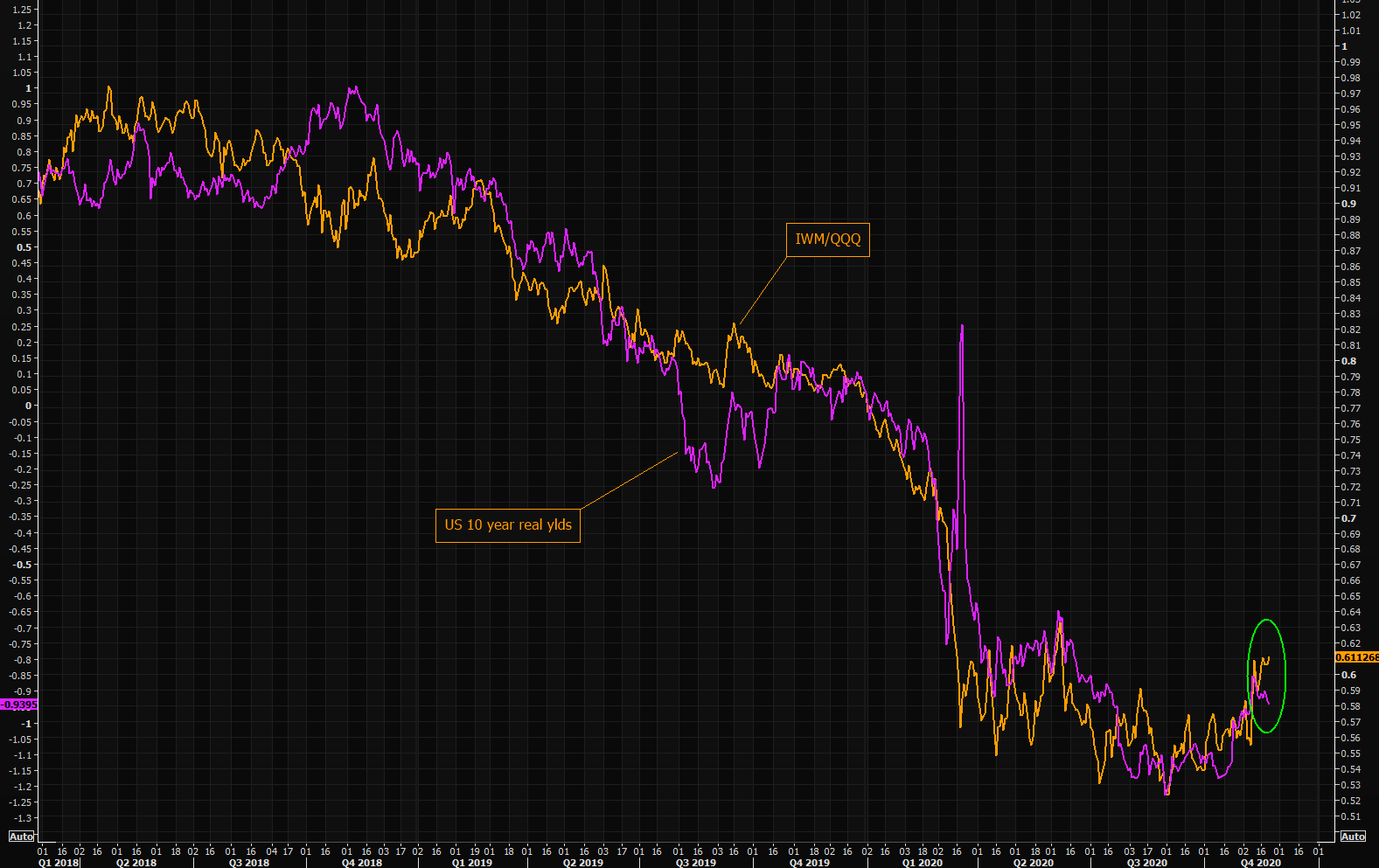