The previous week was revised down.

This does not include the 607,806 initial claims for Pandemic Unemployment Assistance (PUA) that was up from 524,986 the previous week. 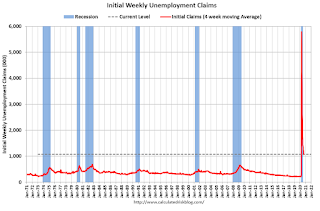 The dashed line on the graph is the current 4-week average. The four-week average of weekly unemployment claims decreased to 1,068,000.

Initial weekly claims was below the consensus forecast of 1.100 million initial claims, and the previous week was revised down. 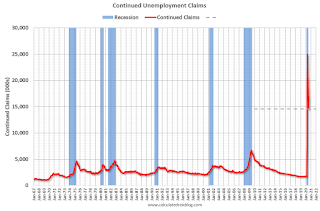 Note: There are an additional 10,972,770 receiving Pandemic Unemployment Assistance (PUA) that decreased from 11,224,774 the previous week. This is a special program for business owners, self-employed, independent contractors or gig workers not receiving other unemployment insurance.

OP: Hold Onto Your Hat