This does not include the 650,120 initial claims for Pandemic Unemployment Assistance (PUA) that was up from 615,599 the previous week. (There are some questions on PUA numbers). 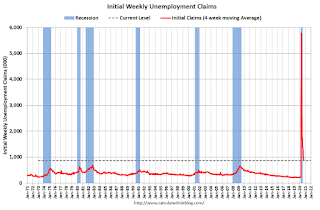 The dashed line on the graph is the current 4-week average. The four-week average of weekly unemployment claims decreased to 867,250. 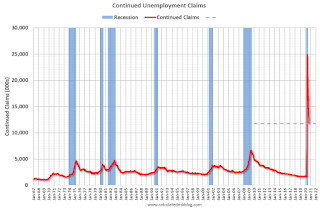 Note: There are an additional 11,828,338 receiving Pandemic Unemployment Assistance (PUA) that increased from 11,510,888 the previous week (there are questions about these numbers). This is a special program for business owners, self-employed, independent contractors or gig workers not receiving other unemployment insurance.