This does not include the 829,697 initial claims for Pandemic Unemployment Assistance (PUA). 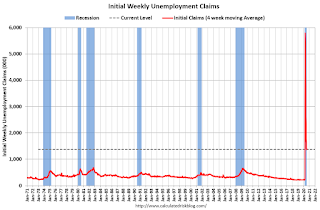 The dashed line on the graph is the current 4-week average. The four-week average of weekly unemployment claims increased to 1,368,500.

Initial weekly claims was slightly below the consensus forecast of 1.5 million initial claims and the previous week was revised up. 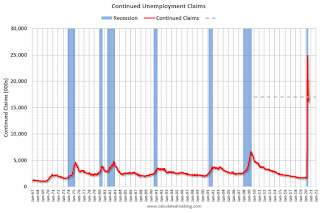 Continued claims increased to 17,018,000 (SA) from 16,151,000 (SA) last week and will likely stay at a high level until the crisis abates. Note that continued claims are released with a one week lag, but this increase (during the BLS reference week for the employment report) suggests weakness in the labor market.

Note: There are an additional 12,413,322 receiving Pandemic Unemployment Assistance (PUA). This is a special program for business owners, self-employed, independent contractors or gig workers not receiving other unemployment insurance.

The rise and fall of Elizabeth Holmes, the Theranos founder whose federal fraud trial is delayed until 2021

Slack Technologies (WORK) Dips More Than Broader Markets: What You Should Know