When the Uber-Wealthy Bash the Wealth Gap, It’s Time to Worry

When the Uber-Wealthy Bash the Wealth Gap, It’s Time to Worry

Multi-billionaire hedge fund manager Ray Dalio recently published a 7500-word call to reform American capitalism. Noting that the nation’s wealth gap is the “highest since the 1930s,” Dalio wrote that rather than distributing income equally, capitalism is “producing self-reinforcing spirals up for the haves and down for the have-nots” which “pose existential threats to the United States,” and amount to a “national emergency.”

Parts of Dalio’s message sound eerily close to another article authored by another uber-successful capitalist, John J. Raskob. In his piece “Everybody Aught to Be Rich,” Raskob writes:

“A man is rich when he has an income which is sufficient to support him and his family in a decent and comfortable manner. That amount of prosperity aught to be attainable by anyone. … It is quite true that wealth is not so evenly distributed.”

Incredibly, Raskob’s piece was published 90 years ago in the July 31 issue of Ladies’ Home Journal — in the year 1929! The two men’s ideas on how to reconcile their generation’s income inequality couldn’t be more different. But they share one important commonality — each sounds the alarm about wealth disparity. And throughout history, that warning has signaled an end to the boom that begot the very wealth disparity in dispute. Case in point, the year of Raskob’s article — 1929 — saw the greatest stock market peak to date and subsequent period of wealth destruction known as the Great Depression.

This chart shows how broad the wealth gap has become in not just the U.S., but also across the pond in the U.K. It divides each country’s stock market by average earnings. In 2019, it takes the average U.S. citizen 123 hours of labor to buy one S&P share. In the U.K., it’s 305 hours to buy one share of the FTSE All-Share Index. 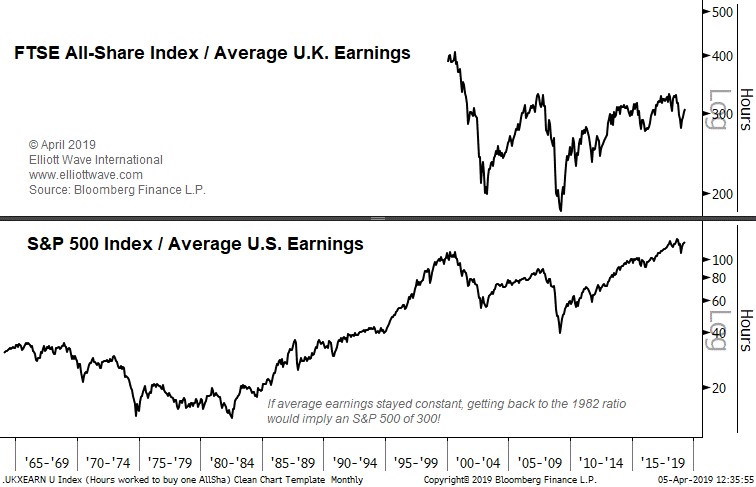 The chart also shows how the greater the wealth gap becomes, the closer the instrument of that wealth — the stock market — gets to significant peaks. Note the last two times when hours needed to buy one share reached a similar extreme. The first time was in 1999-2000. That year marked the peak in both measures, when it took 407 hours for the average Brit to buy one share of the FTSE All-Share and 108 hours for an American worker to buy one share of the S&P 500. That period also saw a wave of Dalio-esque rebukes of capitalism with a raft of articles like “New Politics of Inequality” (Sept. 22 NYT), “Globalization Widens Rich-Poor Gap” (July 13 NYT), and a 1999 United Nations report warning “the world is heading toward grotesque inequalities, neither sustainable nor worth sustaining.”  In November 1999, we cited the “growing gulf between haves and have-nots” as a profound signal of a boom cycle nearing its end and wrote:

“A bear market is nature’s way of redistributing wealth, but apparently, at a trend change as big as this one, people just cannot wait to get in there and lend a hand.”

The second extreme in hours needed to buy one share came near peak territory in 2006-7. Again, main street cited corporate America’s failures, as the widening wealth gap became a “chasm” and social media became a soap box for anti-capitalist rebukes:

“The Rich, the Poor and the Growing Gap Between Them” (June 15 Economist)

The timing of the last wealth disparity alarm makes a more important point. They tend to arrive at big peaks.” (See the full commentary here.)

Two months later, the KBW Bank Index peaked, heralding in the global financial meltdown — in October 2007 came the deepest stock market decline since the Great Depression. At the February 2009 bottom, the hours-work-per-share in the U.S. and U.K. dropped to 184 and 39 respectively.

Today, the lint of acrimony over the widening gulf between the 1% and everyone else is smoldering once again, as these 2019 headlines evince:

“America’s 1% Hasn’t Controlled This Much Wealth Since Before the Great Depression” (Feb. 24 MarketWatch)

“Wealth Inequality is Way Worse Than You Think” (Feb. 29 Forbes)

But as Dalio himself observed: “Most everything happens over and over again through history, and by observing and thinking through these patterns, one can better understand how reality works and acquire timeless and universal principles for dealing with it better.” I couldn’t agree more. Dalio himself is both observer and part of the boom-bust pattern underway now, one in which I fully anticipate the concerns over inequality to disappear as the playing field becomes inexorably leveled.

Follow this link to read our previous commentary on the wage gap and stock market peaks, published just months before the 2007-2008 financial crisis began.

Not Even Binance Is Safe: 7000 BTC Hack Highlights Risk of Exchange Wallets

Chart of the Day: Who Needs Earnings?