We have now "unlocked" this email so that you can easily respond. Please feel free to comment, give feedback, ask questions, provide interesting observations – and we will do our best to answer and engage in a dialogue. Just hit the reply button…

Cross asset momentum breadth at the top of its historical range. We are are in this "all-in" rally together…

Deutsche Bank: "With almost every asset class having rallied strongly in risk-on fashion over the last two weeks, our measure of the breadth of cross asset momentum is now at the top of its historical range, back to levels seen in early June and at the end of last year" 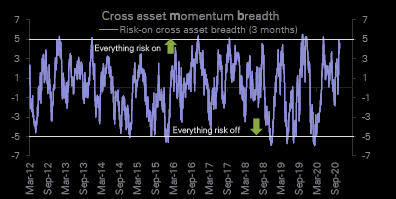 Soon we have no shorts left

Not far from it. In case you do not get the inverted scale, flip the screen upside down and you will get the "feeling".

Yes, glass half full or half empty of course, but would not be surprised to see this indicator move further to the right / up as the year-end melt-up progresses

Nikkei – the cleanest break out of them all

In mid October Kolanovic had a huge Nikkei call, and oh boy was he spot on:

" As a result, we recommend investors buy Nikkei Sep21 110% calls to position for a breakout. Dealer hedging flows near key knock-out barriers, positive seasonality into year-end and the recent dip in Nikkei implied volatility make the cases of buying calls more attractive"

Credit where credit is due.

TMEs technical take back then was:

"Nikkei could melt up above the trend line."

We are seeing Nikkei futures at new recent highs as of writing. Beautiful break out… 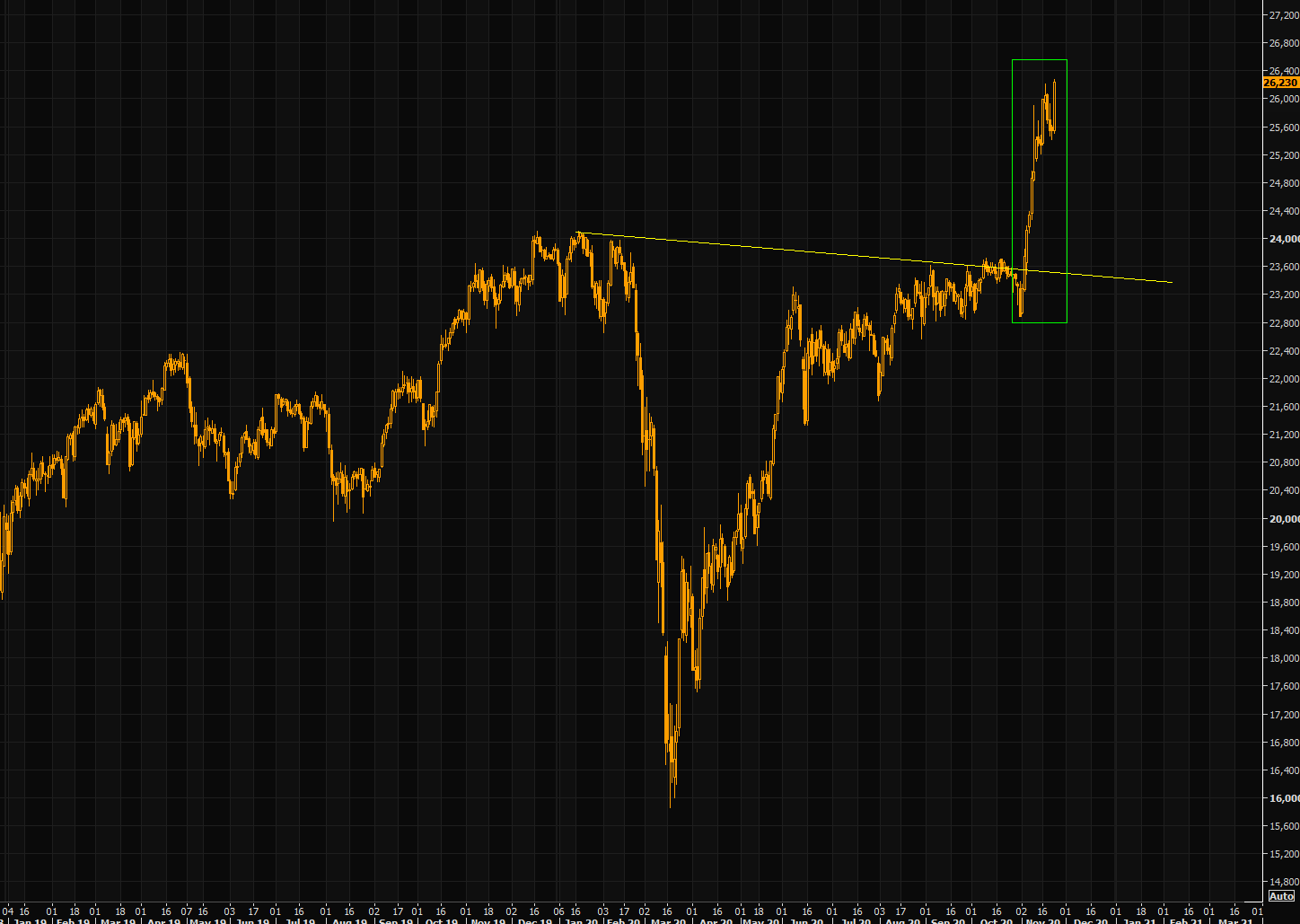 Equity protection back in line with credit protection

The gap between VIX and CDX IG has been closed. Equity volatility got too excite going into elections. Post that event and the latest vaccine news, equity "fear" premium has imploded, especially on a relative basis vs credit "fear". 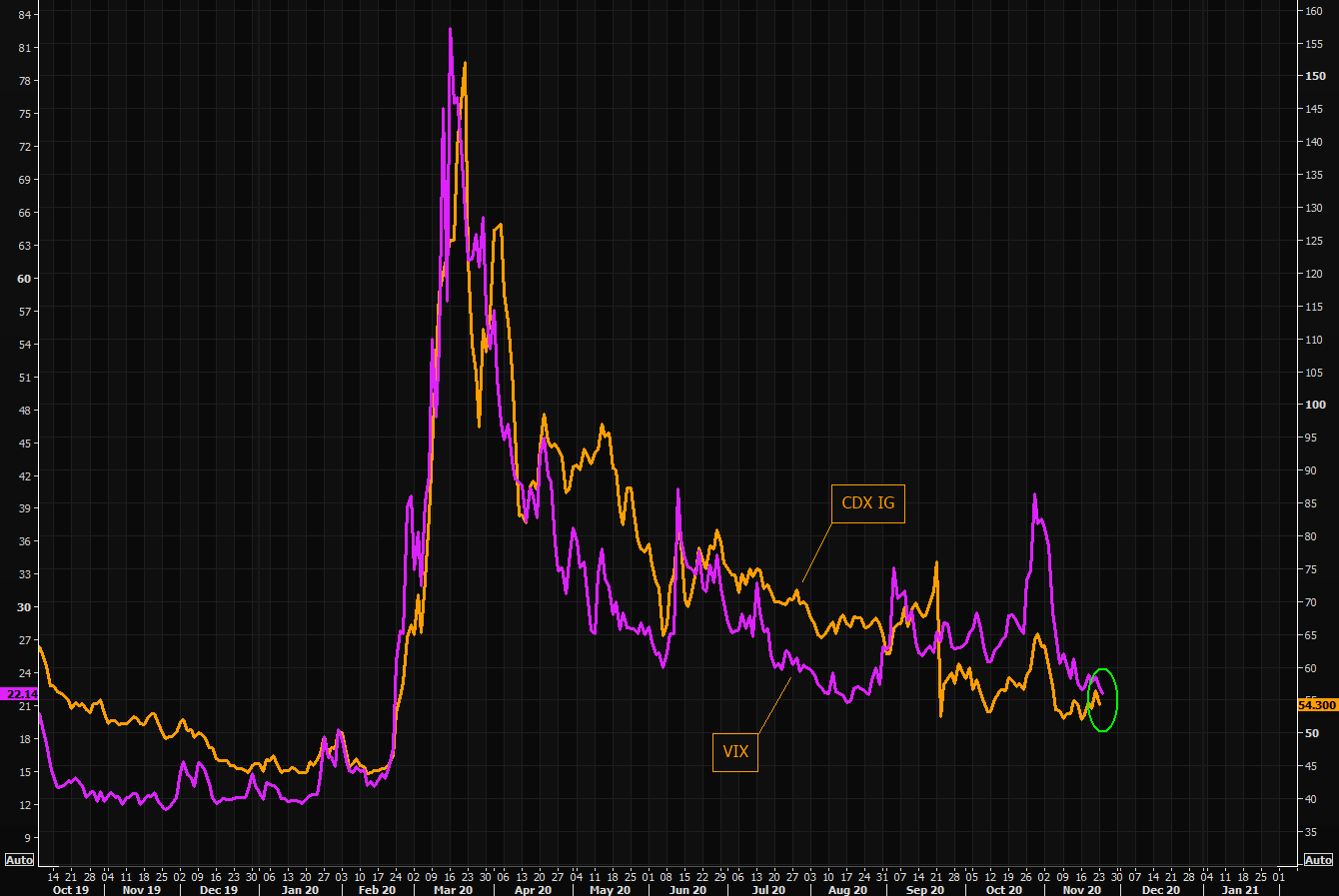 Nice re-acceleration in US earnings sentiment

Earnings sentiment: Analyst upgrades minus downgrades (scaled by total analysts) across markets. 1-month moving average of net monthly upgrades. If you could go long "US earnings" based on this chart you would… 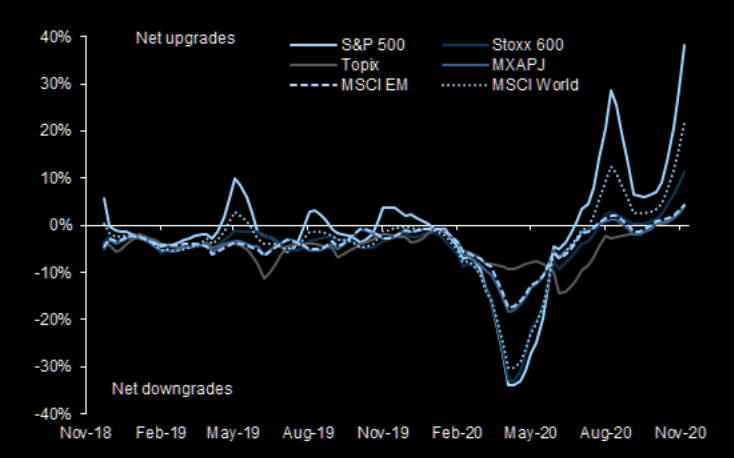 Same bitcoin, different mania, but you do not buy it for the inflation here

Bitcoin seems unstoppable, and yes this set up is different from the "chaos" we saw in 2017 when the crypto space was just too underdeveloped.

As we have showed over past months, Bitcoin has been chased by the younger cohort mainly, but lately we have had guys like Druckemiller and PTJ buying it as well as more traditional asset managers loading up on Bitcoin.

Grayscale funds have exploded over past months, indicating "real" money has started chasing Bitcoin. QTD flows in the Grayscale Bitcoin Trust are tracking a pace that is three times stronger than Q3 according to JPM.

You continues to play the Bitcoin momentum with proper risk management, but you do not chase Bitcoin here because of the inflation logic.

US 5 year break evens vs Bitcoin. 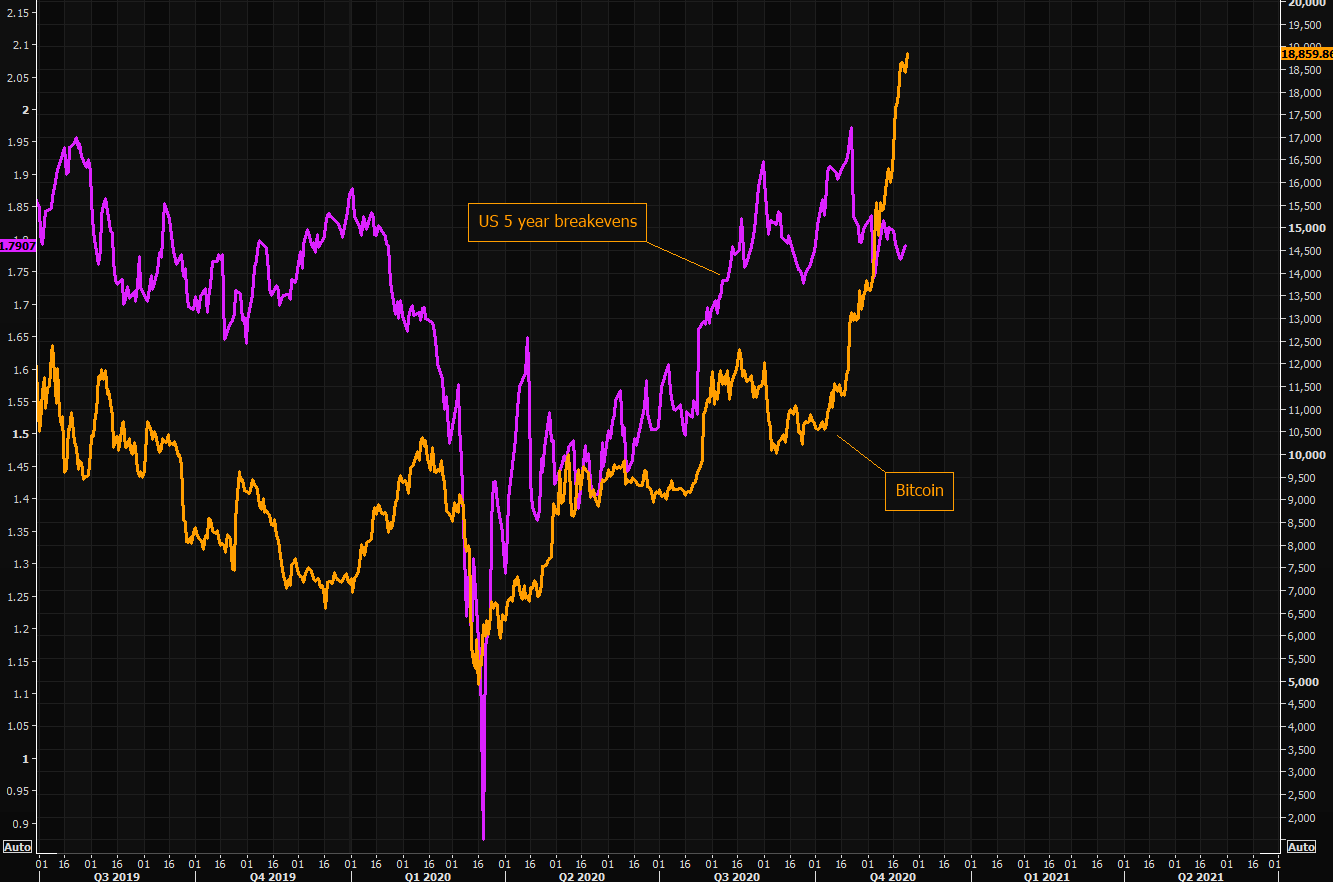 "Slightly extended", but overbought can stay overbought for a long time… 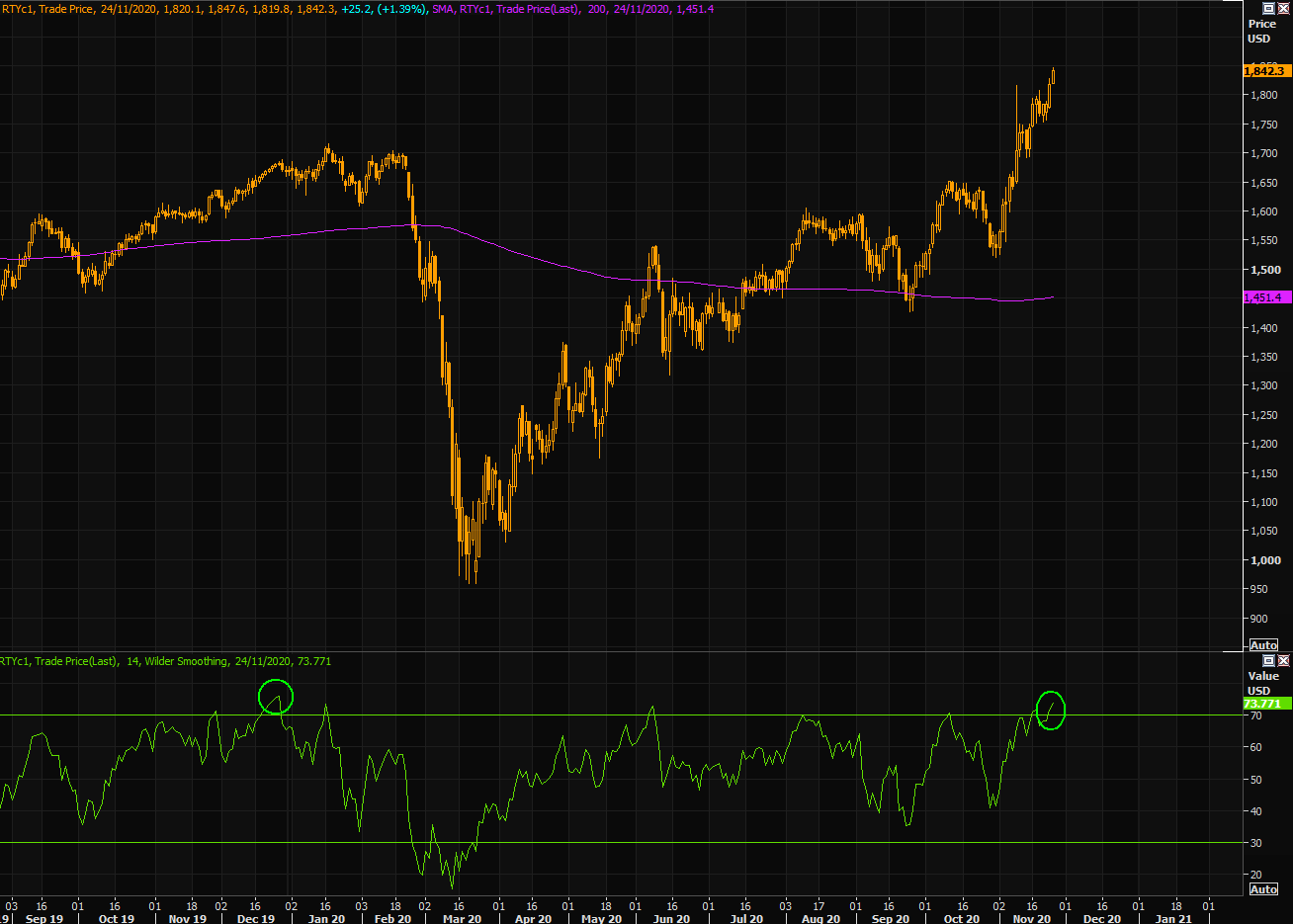 As we all know Buffet has a huge war chest. During the latest filings we learnt he has loaded up on healthcare names, shaved off some Apple and did some other reshuffling. He also left off reporting a position he is currently building.

The derivative of the vaccine (which he obviously believes in) is whatever benefits from the "rotation" back to normality. Exxon should screen well as a candidate.

Buffet sold his last huge stake in Exxon in late 2014, when the stock was above 90. Buffet has been one of the biggest holders of Exxon and he knows the company well. His comment post the sale of the Exxon stake in 2014 was;

"We thought we might have other uses for the money…Exxon Mobil is a wonderful company."

It would be even more wonderful if you sold it at 90+ and buy it here.

Exxon is quality, pays a "healthy" dividend yield and it does not get more American.

As we showed yesterday, Exxon has had heavy call volumes lately, making short gamma dealers chase the stock higher. If Buffet is chasing offers higher as well, Exxon could extend what we already suggested on November 6, namely that dogs can squeeze.

Watch that short term negative trend line carefully, a close above it and the squeeze continues. 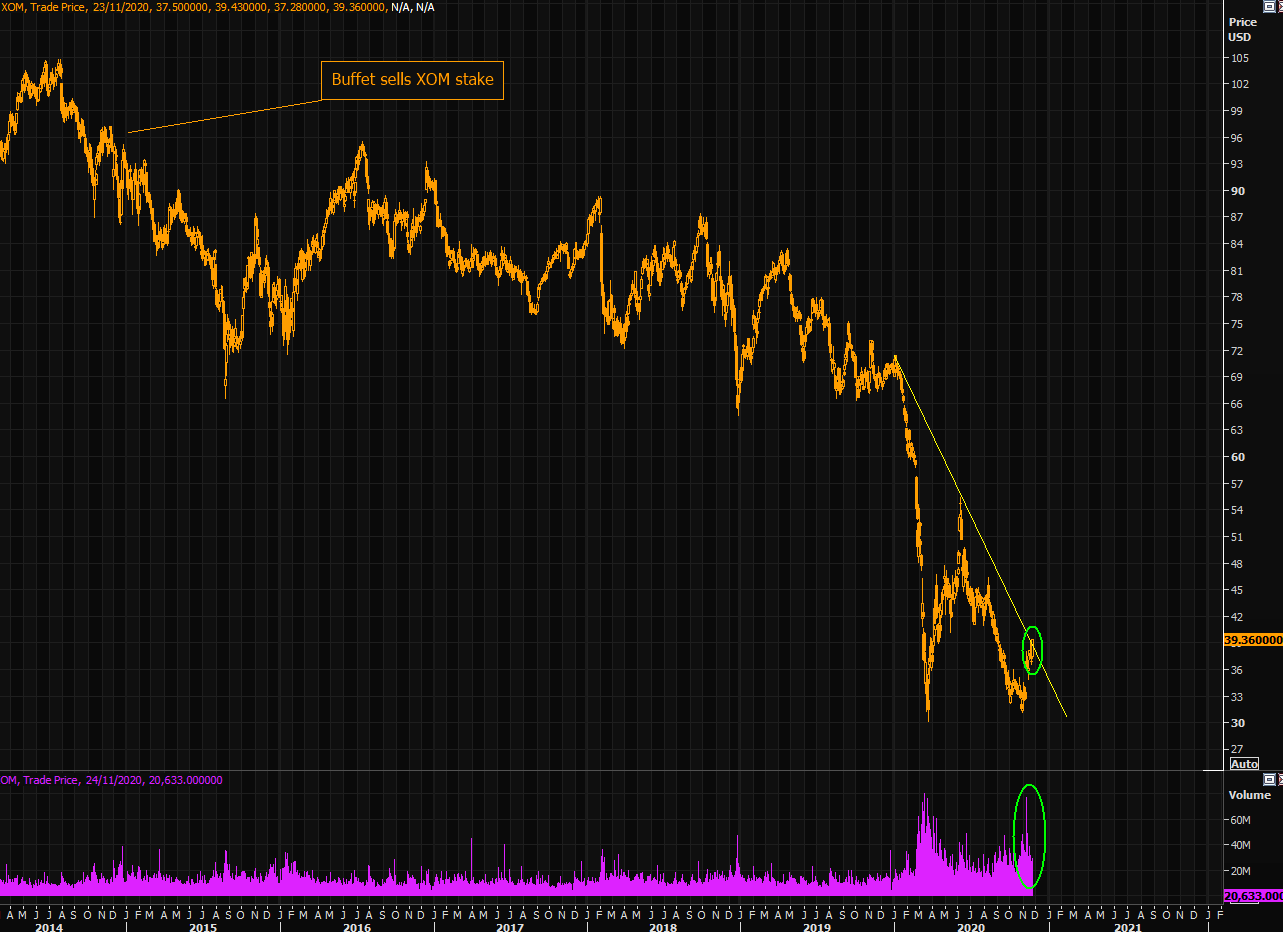 Will some of the small cap bull sentiment spill over to NASDAQ (ever)?

NASDAQ has been stuck for months in some sort of consolidation. Realized volatility has crashed over past 10 sessions. Could this be just a giant flag before the next tech leg higher starts?

Money is currently chasing Russell and other rotation trades, but given the magnitude of some of the moves in rotation names, maybe people will reconsider putting some money to work in lagging NASDAQ (who thought we would talk abut lagging NASDAQ a few months ago).

Watch the negative trend since early September highs. If they push it above it, a Santa tech rally could be setting up. 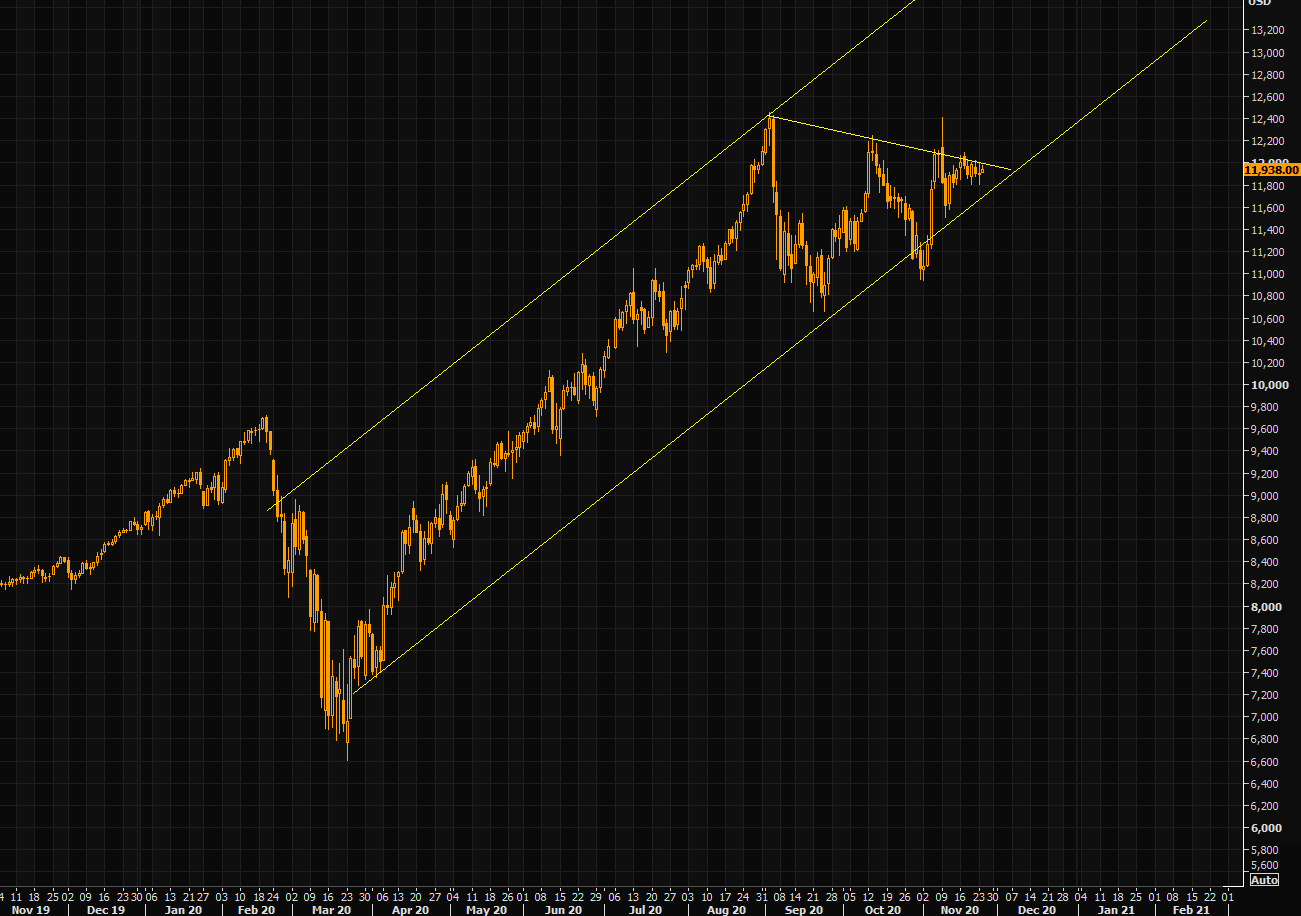 Do you dare some tech?

NASDAQ vs Russell futs ratio has traded here once since mid March. Tech has traded extremely lackluster but NASDAQ could get momentum chasers going should we close up a percent or little more.

Chasing the rotation trade as the short term best idea is not overly original these days. 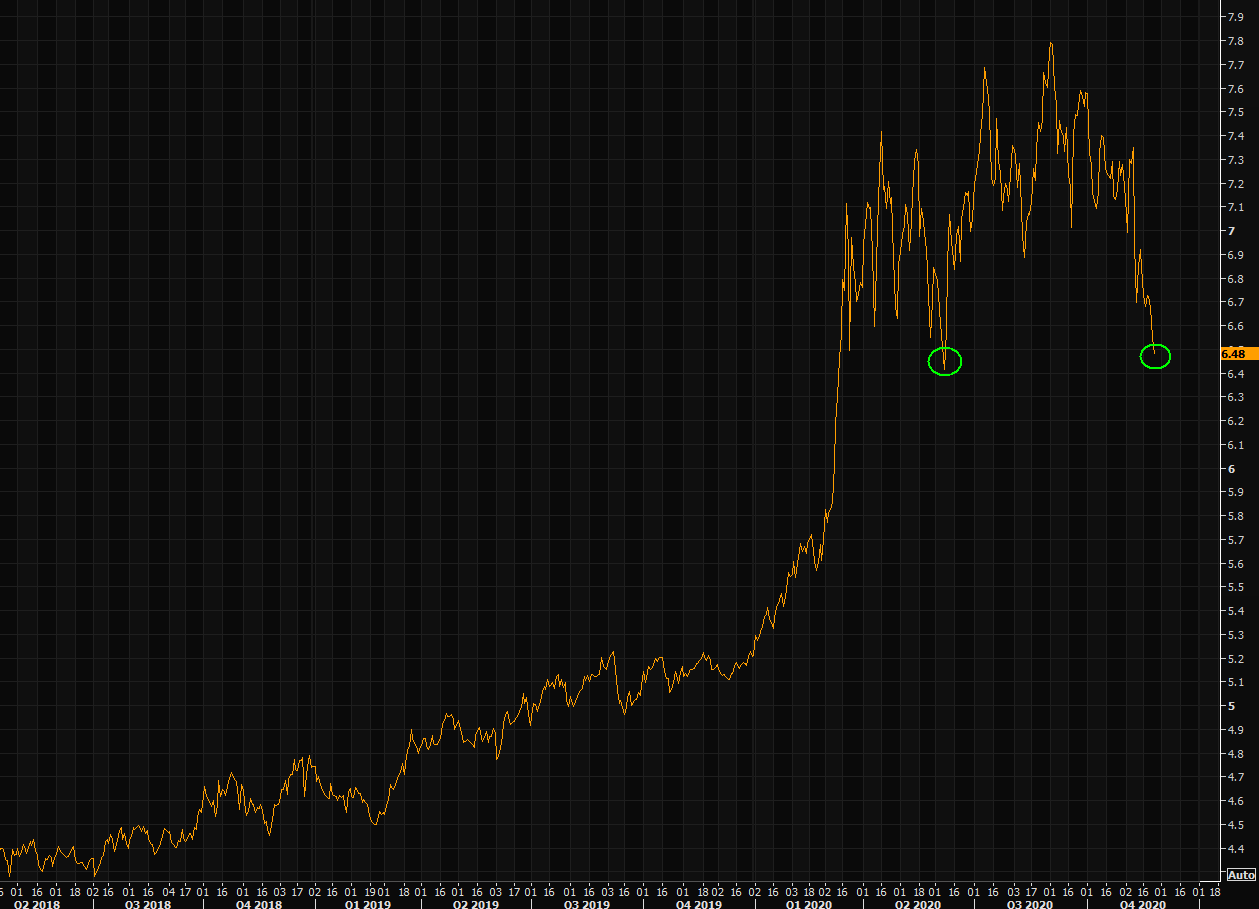 People have not been more greedy in very a long time. 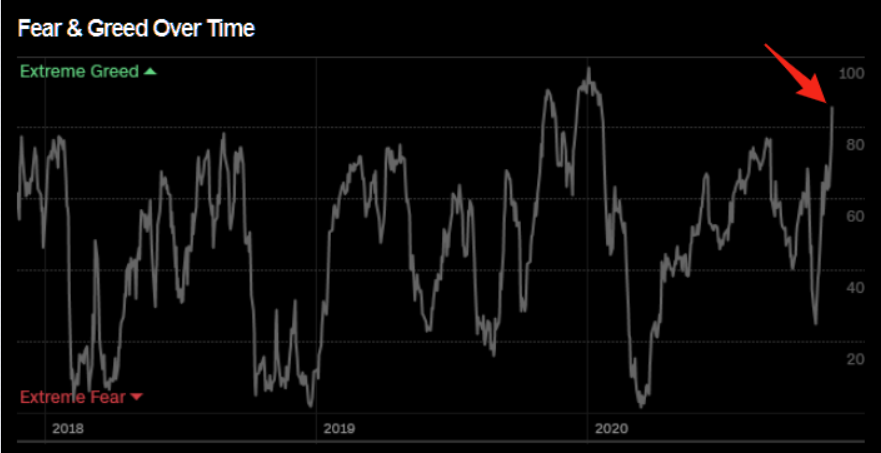 Based on JPM pure-fresh bond survey: expectations for 10-year Treasury yields in mid-2021 center on the 1.25% area. Only 8% of respondents think it will be at or lower where we are today. When a consensus is this strong it is bound to be……. 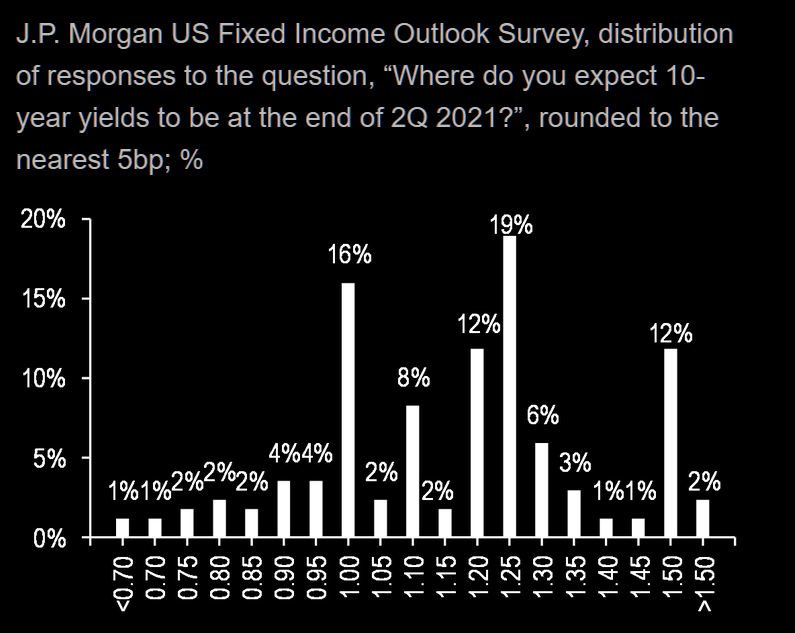 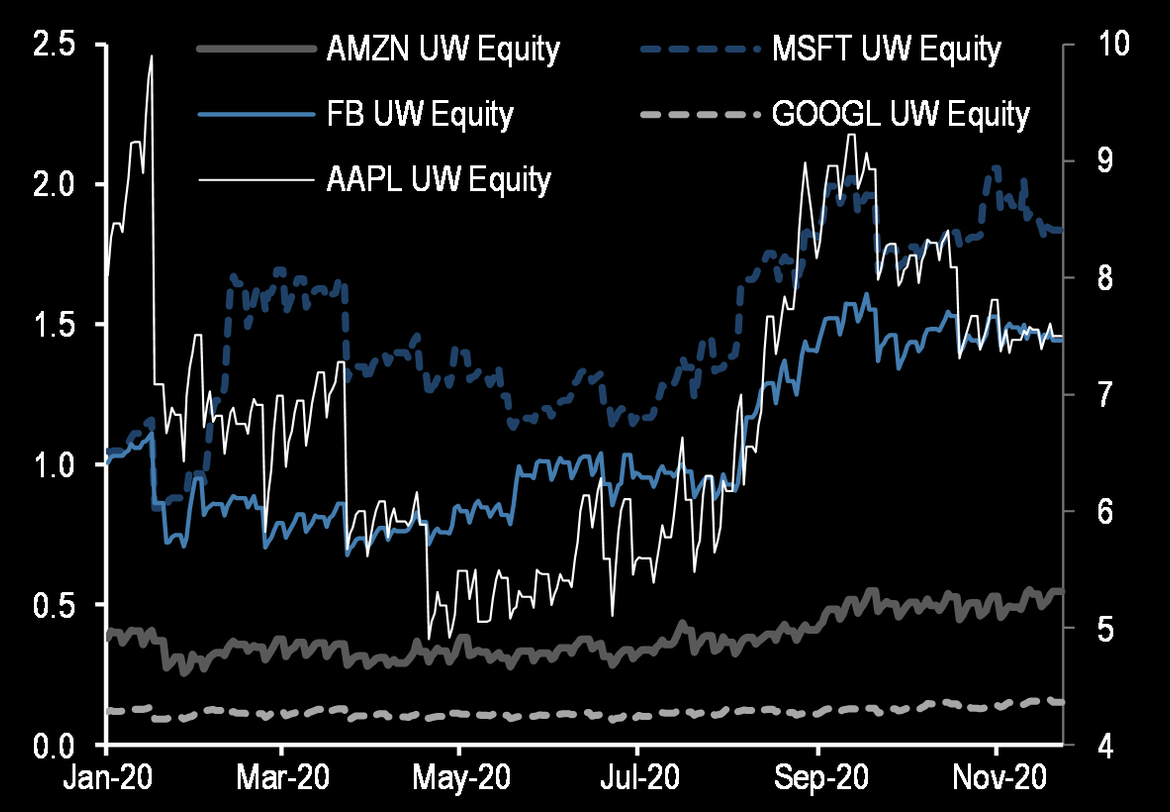 When there is Yellen, should you be gold selling?

Janet Yellen is back. Fed's balance sheet turning up again. Negative yielding bonds at new highs. Media headlines are calling for the end of the bull market in gold. Something does not feel right. 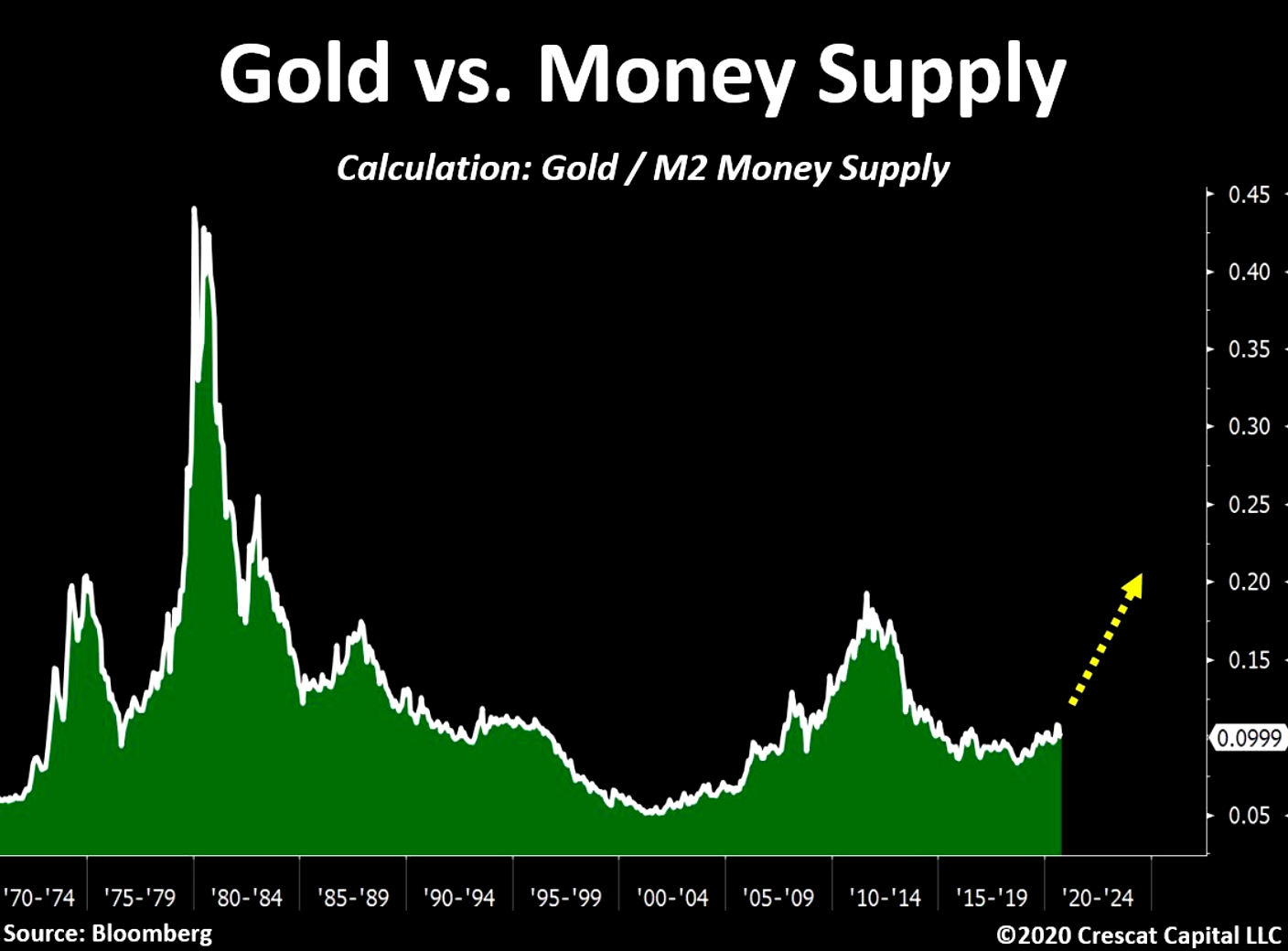 Funny – nobody talking about gold hitting the 200 day moving average

Everybody is busy chasing Bitcoin and the rotation trade. The violent break down has taken gold down to the relatively big 1800 ish level, right on the 200 day moving average. 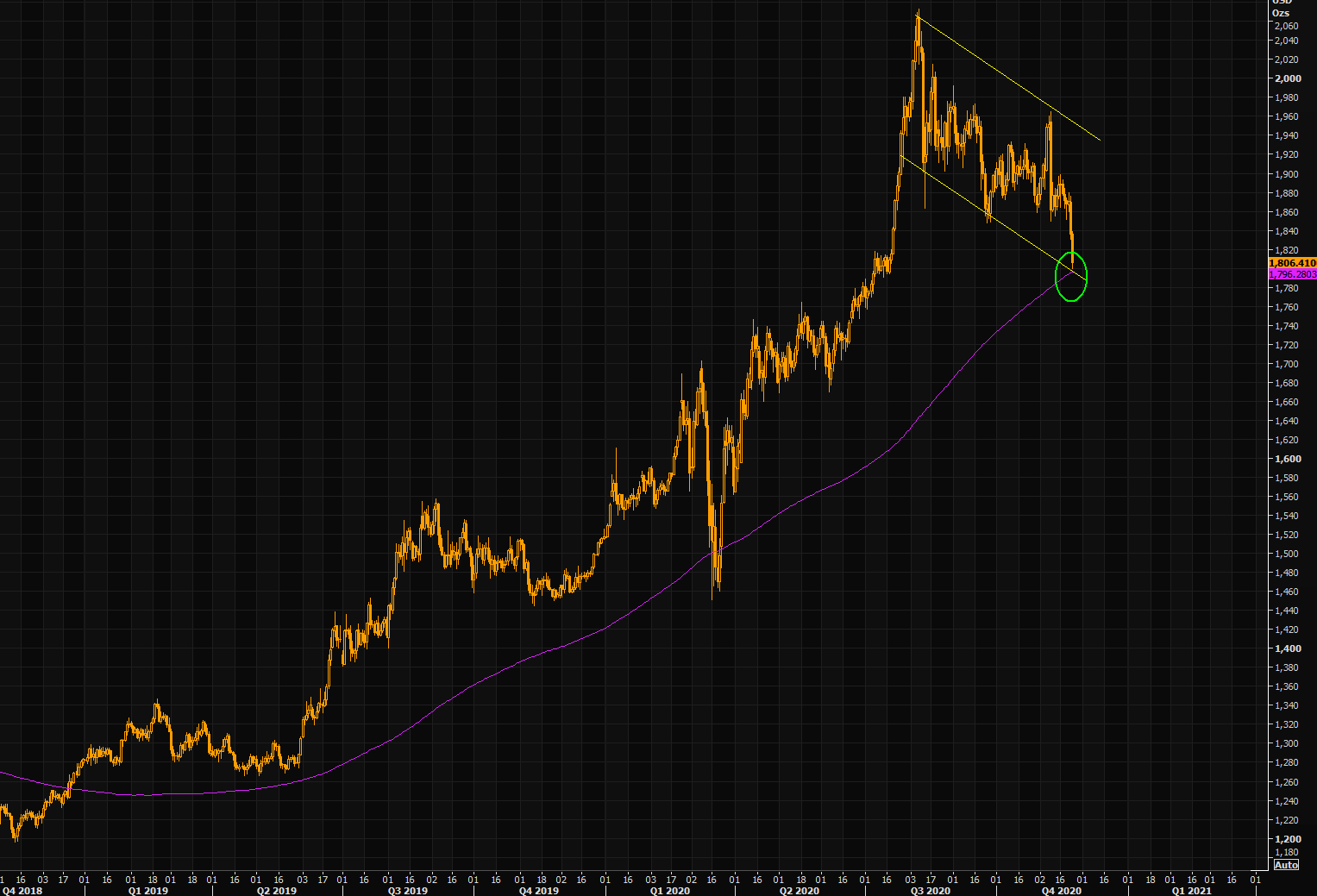