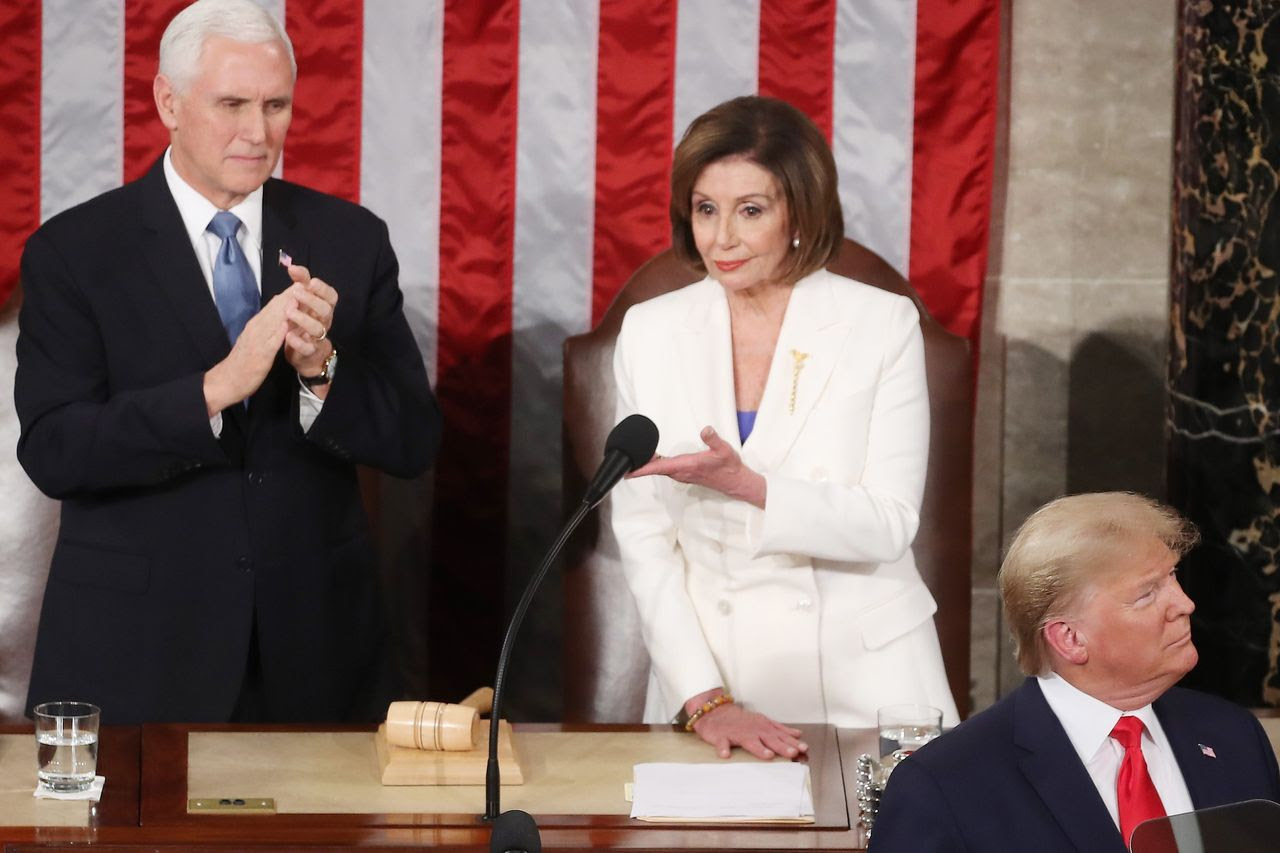 President Donald Trump and House Speaker Nancy Pelosi aren’t exactly the best of friends. But to strategists at French bank Société Générale, they are the best combination of leaders if the goal is the highest possible stock market.

SocGen, in a detailed cross-asset report, examined five different U.S. election outcomes and what they mean for markets. The most likely outcome, they say, is a clean Democratic sweep, to which they assign a 32% chance; the second most likely outcome is a Joe Biden presidency with a Republican Senate, to which the analysts assign a 30% chance. They give a 20% chance to a Trump presidency with a Republican Senate and the Democrats in control of the House, a 16% chance to a Trump win with Democratic control of the House and Senate, and a 2% chance of a clean Republican sweep.

Over the next two years, monetary policy will remain loose no matter who wins, as will continued monetization of the public debt and strains in U.S.-Chinese relations, the bank says. Both presidencies will be focused on getting the economy back on track after COVID-19.

Taxes would be a clear area of differentiation, with Biden pledging to hike corporate taxes, as well as considering increases on income taxes for those making more than $400,000. The SocGen analysts don’t expect Biden to reverse Trump’s tariffs, but at the same time they expect him to refrain from introducing new levies. A Biden administration would seek to bolster the Patient Protection and Affordable Care Act (commonly known as Obamacare), while the analysts say Trump would likely be continually stymied in his efforts to reverse it.

A Biden presidency would coordinate more with other developed countries for “smooth and broad implementation of a digital tax, potentially putting a strain on the global tech sector and a drag on U.S. equities.” That could mean a further diversification out of the U.S. dollar DXY and into green investment and European stocks XX:SXXP. With a clean Democratic sweep, “the $1.3 trillion infrastructure plan at the federal level, from bricks to chips, state interventionism (buybacks, big tech regulation) and corporate tax proposals would be implemented faster.”

A Trump presidency would see a continuation of his American First agenda, though without a full sweep it would be difficult for him to push further tax cuts. Tensions between the U.S. and China would likely continue, but with less focus on tariffs, and more emphasis on Hong Kong, equity flows, and technology, the analysts say. A Democratic House would help counter the tightening fiscal impulses of Senate Republicans. In a Trump presidency, SocGen would prefer value stocks and midcaps with good balance sheets, as well as Japanese stocks JP:NIK, and would favor them over growth stocks and Chinese stocks CN:SHCOMP.

A contested election could lead to a stock-market correction on the order of 10% to 15%, and holding U.S. Treasury inflation-protected securities, gold and interest-rate volatility products could offer effective portfolio protection. But afterward, there would be a buying opportunity for stocks, as investors start to price in the early stage of the next economic cycle, and because of the ‘there-is-no-alternative’ trade.

Tesla TSLAunveiled battery innovations and increased efficiencies, but that would not immediately impact their business. The day’s “real takeaway” was that Tesla is aiming for full vertical integration, according to Gene Munster of Loup Ventures.

“With the Battery Day in the rearview, we think there is a lack of upcoming catalysts and are cautious about demand given the recessionary environment,” added Ben Kallo, an analyst at Baird, who put the electric-vehicle maker on its “fresh pick” list for a short-term drop in price.

Nike NKE, a component of the Dow Jones Industrial Average, jumped 13% in premarket trade after it reported stronger earnings and revenue than forecast, thanks to demand for footwear. Rival sportswear makers Adidas XE:ADS and Puma XE:PUM rose in Frankfurt, as did Under Armour UAA and sneaker seller Foot Locker FL in premarket trade.

Shopify SHOP, the retail software company, said two employees stole customer data, and that it has reported the incident to the Federal Bureau of Investigation.

Federal Reserve Chair Jerome Powell will go before the House Select Subcommittee on the Coronavirus Crisis, the second of three Capitol Hill appearances this week. Vice Chair for Supervision Randal Quarles will discuss the economic outlook, and a slate of regional Fed presidents also will speak. Flash purchasing managers indexes from the U.S. are due, after eurozone data missed estimates.

After a solid 140-point advance for the Dow industrials DJIA on Tuesday, U.S. stock futures SP 500 FUTURESNasdaq-100 FUTURES were again higher on Wednesday.

Gold futures GCZ0 fell, while the dollar was steady.

Chart of the Day: Is Good Data Good for Markets?