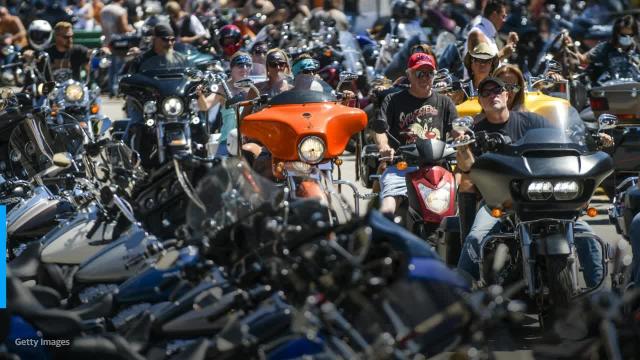 WASHINGTON — In early August, more than 460,000 motorcycle enthusiasts converged on Sturgis, S.D., for a 10-day celebration where few wore facial coverings or practiced social distancing. A month later, researchers have found that thousands have been sickened across the nation, leading them to brand the Sturgis rally a “superspreader” event.

“The Sturgis Rally was one of the largest in-person gatherings since the outbreak of COVID-19 in the United States,” said Joseph J. Sabia, one of the study’s authors, a professor of economics and the director of the Center for Health Economics & Policy Studies at San Diego State University. He described the “public health costs” of the rally as “substantial and widespread.” He and his co-authors estimate that dealing with the fallout from the rally will involve more than $12 billion in health care costs.

“The spread of the virus due to the event was large,” the authors write, because it hosted people from all over the country. But the severity of the spread was closely tied to the approaches to the pandemic by Sturgis attendees’ home states. In some places, any spread related to people returning from the rally was blunted by strong mitigation measures, like a face-mask mandate or a prohibition against indoor dining.

The findings come in a new paper, “The Contagion Externality of a Superspreading Event: The Sturgis Motorcycle Rally and COVID-19,” published by IZA — Institute of Labor Economics, a German think tank. Its four authors are all researchers affiliated with American universities.

It is not clear if the study was subject to peer review.

The rally was held in a state whose governor, Kristi Noem, is a close Trump supporter and, like the president, a skeptic of many coronavirus mitigation measures, such as the wearing of face masks. And while the rally itself had no political orientation, Trump has made overtures to bikers, even inviting some to ride at the White House. At the Sturgis rally, a group called Bikers for Trump registered voters.

The new research paper contains an unlikely but telling quotation from Steve Harwell, singer for the band Smash Mouth, which performed at this year’s rally: “Now we’re all here together tonight. And we’re being human once again. F*** that COVID s***.” Trump used a Smash Mouth song during the 2016 campaign; the band played at the Lincoln Memorial ahead of his 2017 presidential inauguration.

Many of the researchers behind the Sturgis study previously examined the protests against police brutality that swept across the nation earlier this summer. Many Trump supporters wondered why neither the media nor public health professionals condemned those protests, when they seemed to plainly contravene social distancing guidelines. But most people at those protests wore masks, and there was virtually no indoor socializing of the kind that aerosol scientists say poses the highest risk of viral transmission. That combination prevented those protests from becoming superspreader events.

In that earlier paper, published by the National Bureau of Economic Research, the authors also surmised that even as protests brought thousands together in outdoor environments, they drove others indoors, whether out of fear of violence or concerns about viral spread. “This enhanced mitigation offset the effects of diminished social distancing,” Sabia told Yahoo News. He said a similar effect could be observed after the Trump campaign held a rally in Tulsa, Okla., in June. That rally saw low attendance, which may have prevented it from becoming a viral hot spot.

Indeed, no such offset was evident in Sturgis, where people moved around more, not less, once the bikers arrived, according to cellphone records. Those records were collected by a company called SafeGraph and stripped of identifying data. Civil libertarians have expressed concerns about using cellphone location data for pandemic response; public health professionals maintain that such data is invaluable, allowing them to track demographic patterns with an accuracy that would otherwise be impossible.

South Dakota has a mostly rural population, which may explain why it declined to institute any of the restrictive measures that went into effect throughout the country in March and April. Trump traveled there in July to speak at Mount Rushmore.

Still, more than 60 percent of Sturgis residents had wanted the rally delayed. City officials considered that possibility, but ultimately allowed the event to move forward. Gov. Noem showed little concern about the possibility of the rally leading to greater viral spread. “We hope people come,” she said on Fox News. “Our economy benefits when people come and visit us.”

Bikers came to Sturgis from around the country. They congregated in local bars and restaurants, which allowed indoor seating. They attended concerts and motorcycle races. Then they went back to their states of residence — and, according to the new research, carried the coronavirus with them. More than 90 percent of the attendees came from outside South Dakota.

“The Sturgis Motorcycle Rally,” the authors of the study conclude, “represents a situation where many of the ‘worst case scenarios’ for superspreading occurred simultaneously: the event was prolonged, included individuals packed closely together, involved a large out-of-town population (a population that was orders of magnitude larger than the local population), and had low compliance with recommended infection countermeasures such as the use of masks. The only large factors working to prevent the spread of infection [were] the outdoor venue, and low population density in the state of South Dakota.”

Using anonymized cellphone data and public health reports from the federal Centers for Disease Control and Prevention, the researchers concluded that not only did the Sturgis rally cause a rise in coronavirus infections in surrounding Meade County, but it led to similar spikes (of varying intensity) across the nation, from Southern California to Maine.

South Dakota saw a 35 percent rise in cases, while counties in other states from which a significant number of residents traveled to Sturgis saw increases of 10.7 percent. Those counties were mostly in Western and Midwestern states, including Arizona, California, Colorado, Iowa, Minnesota, Nebraska, Nevada, Washington and Wyoming. Counties deemed “second highest inflow counties” saw a 12.5 percent rise in infections.

In aggregate, the data “provide strong evidence that the Sturgis Rally appears to have been a superspreader event,” the authors conclude.

The new findings come just days after a Minnesota man became the first Sturgis attendee to die from COVID-19, the disease caused by the coronavirus.

The researchers found that the rally, which hosted 462,182 people between Aug. 7 and 16, “generated substantial public health costs,” totaling $12.2 billion. (That calculation is based on figures on health care costs associated with the coronavirus from another IZA study.) The authors note that the cost was “enough to have paid each of the estimated 462,182 rally attendees $26,553.64 not to attend.”