Danny’s View: A Beating For The Bulls With A 93% Down Day

Monday’s action was not good for longs.

When I started on the floor, there were a lot of things to learn: Order flow, program trading and fair value, trailing stops, economic reports, technical levels (which mattered but were much different than they are today) and just the simple act of getting your orders filled!

At the same time, I was getting my off-floor lessons from Marty ‘The PitBull’ Schwartz.

While we both agree that some of the old stuff we used to make money on doesn’t work anymore, a lot of the trading rules we came up with continue to be part of today’s price action. For instance, even though we haven’t had a true bear market since 2008/09, our bear market trading rules still apply.

Yesterday’s rule is something I learned in 2007 when the PitBull told me there was something wrong, that there was “rotten wood floating around in the market leaders, the banks and brokers.” A month later all the subprime news started hitting.

I went out for a few hours yesterday and when I came back the ES was down almost 80 points. I thought it was the bond weakness but the PitBull said “The markets can’t go up when the banks are weak.”

Moral of the story, rules matter.

When I did these two videos, I did them to help preserve some of the unending market knowledge the PitBull has, and hoping to do one in the near future.

Will the ES go down again today? Only the trading gods know for sure.

What if the ES is just establishing a new trading range? The old one was 3920 to 4000 what about 3950 to 4050? Speaking of rules, the PitBull’s rule about looking for a low the Thursday or Friday before the Dec Quad Witching comes to mind.

Our Lean: Sell the early rallies and look for a low going into the European close (at 11:30 ET) Keep an eye on the bonds (/ZB or TLT), the dollar (DXY or UUP) and the bank stocks. There is a massive amount of rotations going on, so it’s best to have the YM, RTY, ES, and NQ up to see it.

I don’t like it to be overly complicated, but if you can keep 4 to 6 charts up at once, it will help.

What a weird session we came into yesterday. Despite a 92% downside day on the NYSE, the SPX declined just 1.8% on Monday. That’s hardly catastrophic, although some areas of the market were under more pressure than others.

Bonds fell, while the dollar and yields rose. The S&P lost active support in the process and now we move to our next set of downside levels.

We had a few stop runs yesterday on our open positions. It’s why we

Traditionally, when I have several stops triggered on the same day, it’s a day for me to “listen to what the market is saying.” Maybe the S&P will find its footing and we’ll rotate higher. But it’s possible conditions will become choppier ahead of next week’s CPI reading and the Fed. 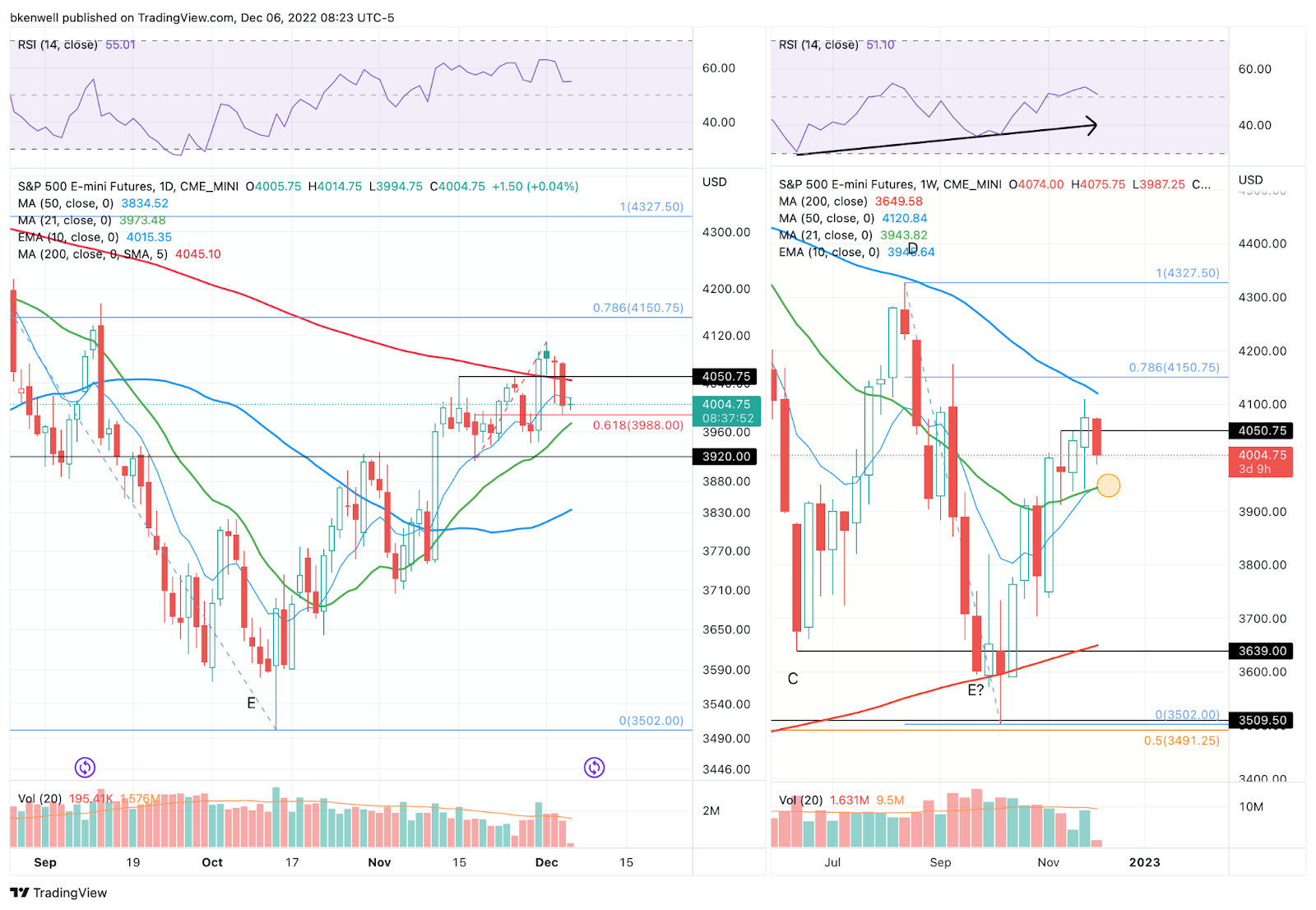 3988 is the 61.8% retrace of the current range, which held as support late yesterday.

You may notice how nicely the 3940 to 3950 buoyed the ES from mid-November on. So if the ES breaks 3988 and doesn’t hold the 21-day moving average, then this area could be back in play.

If you are a multi-timeframe trader like me, you’ll also notice that ~3940 is where the 10-week moving average is crossing up through the 21-week SMA and both are advancing rather than declining.

On the upside, I think we need to consider 4050 as potential resistance (again), which is a multi-week resistance mark (excluding a few days last week). It’s also where we find the 200-day.

Here’s a look at this week’s range thus far. You’ll notice how 4012 to 4015 went from support to resistance yesterday and how it’s been resistance during Globex.

If we rally there today, keep an eye on this level. If it can be reclaimed, follow the retracements higher (and note yesterday’s high: 4055.50). Below 3994 and yesterday’s low is in play.

On the upside, there are a lot of “moving parts” between $400 and $404. Above the 200-day and perhaps we can see another push to that weekly VWAP measure.

(I also can’t help but notice that open gap down at ~$381, if the selling pressure does pick up over the next days/weeks).

You all know I like when trend support lines up with a prior breakout area. In bear markets, this is a tougher trade, but it’s the one I like the most. I like a long here around $90 with a smaller position size so I can use $86 as my stop.

Perhaps the best-looking retailer right now. I’m a ½ sized buyer today if we see a test of the 10-day moving average and a retest of prior uptrend resistance (blue line).

I’m highlighting AAPL because it has a $2.3 trillion market cap. Yesterday it had a nice rally going, then flunked and gave up its gains.

If it can keep its footing, look for potential support in the overall market as well.

Danny’s View: A Beating For The Bulls With A 93% Down Day

Danny’s View: It’s The Bulls’ Ball To Drop With Powell On Tap