The S&P sits between two key zones as we wait.

The only thing I can say is “what a mess.” The ES gave us a nice trade yesterday shortly after the open, then the headlines went wild.

Economic reports, earnings, the Fed, and now the story of two Russian missiles crossing into Poland — which is in NATO. After the headlines, crude oil and grains rallied.

I keep telling the PitBull that this is going to be like this for a very long time. I have said many times that as the winter weather hits Europe, Putin will escalate his attacks on Ukraine and it appears to be starting. Putin is in a desperate situation. His army is depleted and several of his most staunch backers, including the Chinese, are calling for negotiations and an end to the war.

I said several times this year that “things felt disjointed” and the next phase of Putin’s ‘special military operation’ is getting even uglier. The story about the Russian missiles landing in Poland is not over, especially if Nato enforces its Article 5, which specifies that any attack on any member country is effectively an attack against them all.

As I have said many times recently, I am a cautious bull. However, with the Fed still talking about its hawkish stance and with Putin’s war in Ukraine heading into a new phase, I believe the end of the year may be more about protecting portfolios than adding to them.

It’s Wednesday now, and from the low a week ago to the high yesterday, we’ve seen the S&P climb 300 points or 8%. The Nasdaq has rallied even more.

The buyers continue to buy the pullbacks at the 3960 to 3980 area and I don’t disagree with it until it fails, but I think you can sell the 40 to 60-point rallies for now.

The table above shows where the MOC money has been flowing over the past five days (week), the past 10 days (two weeks) and the past 20 days (past month).

In the end, it was “headline hell.” A big early rip after the PPI number, a selloff as the Fed headlines showed more hawkishness, and then the ‘flunk-a-dunk’ after it was reported that Russian missiles landed in Poland which Russia’s defense ministry has denied. In terms of the ES’s overall tone, it was “skittish.” In terms of the ES’s overall trade, volume was on the high end at 2.16 million contracts traded.

Despite the headline-driven volatility yesterday, we still had a 75% upside day and the indices still put in a green session.

That said, the S&P failed to hold 4000 for a third-straight session, while the Nasdaq struggled with a key junction on the charts as well.

For now, the trend remains in favor of the bulls. However, the real key becomes, how will the markets hold up to a larger dip? In my view — and it means nothing at all compared to what the markets want to do — it would be healthy to retrace some of the recent rally from last week. Let’s get into the specifics. 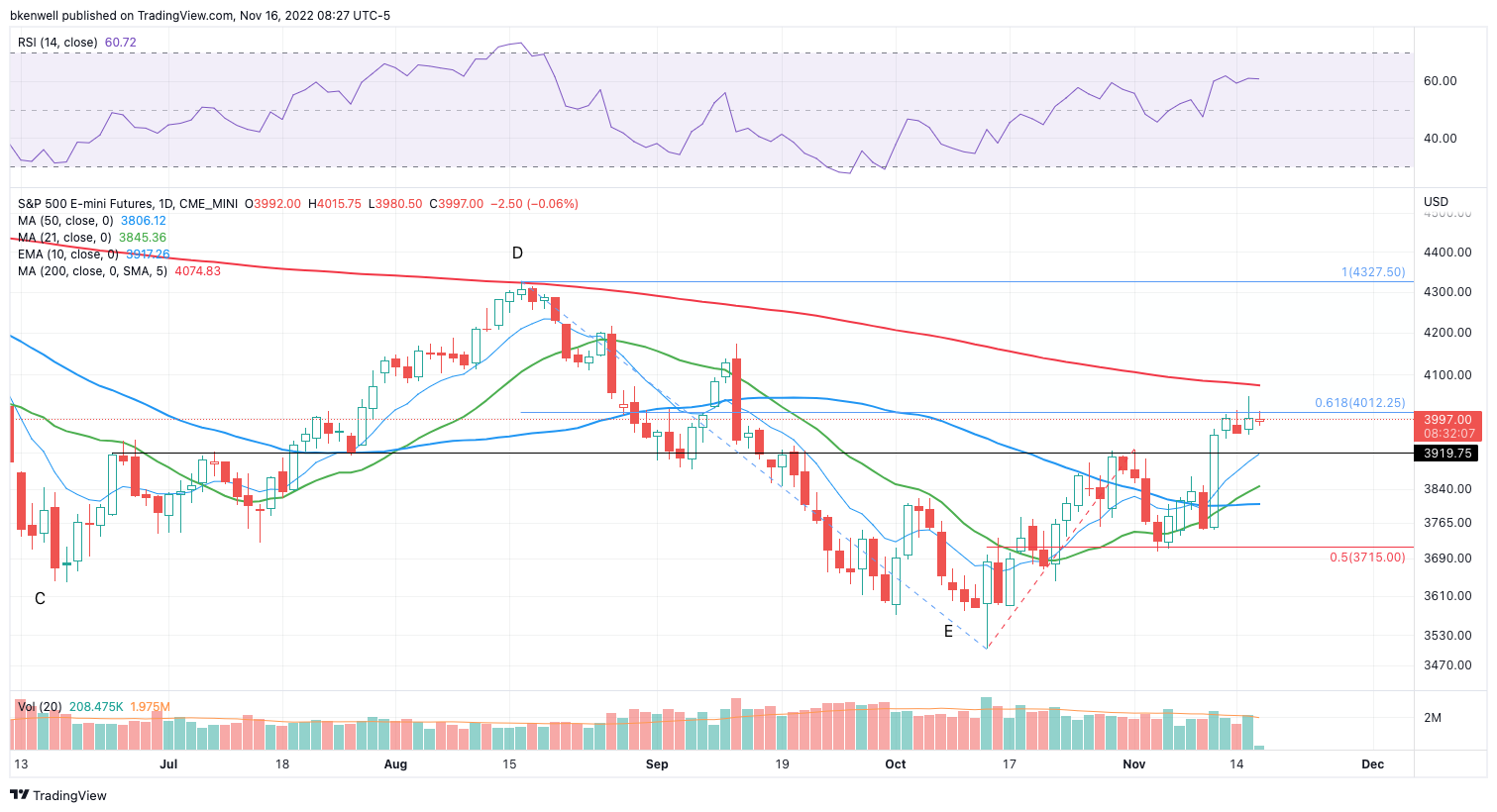 The first word that comes to mind here is: Patience.

On the upside, 4015-ish has been resistance.

Support outlined on the downside.

It’s a pretty similar story with the SPY as it tangles with the 61.8% retrace.

The dollar is under a bit of pressure this morning. Continue to keep an eye on long-term support in the DXY and the UUP.

Danny’s View: PPI On Tap. Can Bulls Keep Up The Momentum?

Danny’s View: S&P Finds Its Footing, But Can It Rotate Higher?