The S&P never does what you want it to do when you want it to, and yesterday’s rally was a perfect example. Traders were preparing for the worst — and didn’t get it. That may be the best explanation for how a seemingly hard turn by Fed Chair Jerome Powell translated into the biggest rally since 2020.

This week the sellers piled in on the short side thinking that the Fed headlines would be the catalyst for the next leg down. Instead, all the selling power was used up and after a quick headline dip, the buy programs showed up in force and pushed the ES up into the buy stops. After the buy programs kicked in, it was a stop-run bonanza that never stopped until after 4:00.

That said, I’m not going to start cheering until the ES closes above 4750. There are still 11 trading days left in 2021 and Friday is the December quad-witch expiration. Statistically, it’s the strongest day of the week.

Everything went my way yesterday. I had a plan and executed it perfectly and I got paid handsomely because of it. That’s why we do The Opening Print — to put a plan together for the day and capitalize on it during the trading session.

I ended up not adding to my calls, but I bought 6 ES and 2 NQ contracts. I sold the NQs and stayed long 4 ES.

Our lean is to look for higher prices. Based on the ES’s close, it’s quite possible we see a gap up and go. Now that the Fed is out of the way it’s time for Santa! We just have to get through the quad-witch.

Lastly, be smart! MrTopStep has a rule that says the ES tends to go sideways to down after a big up day.

If you have big profits, it’s okay to take some off the table and ride the rest.

I put this out in the MrTopStep chat just as the low was being made:

Coming into the Fed announcement at 2 pm, the ES traded up to 4622.50. From there, it knee-jerked lower, dropping 18.50 points in just a few minutes in reaction to the Fed headlines.

We didn’t get a retest of the prior day’s low, but the ES did tag the current day’s low before bouncing hard.

Despite Fed officials approving plans to accelerate its taper and putting a few rate-hikes on the table, stocks screamed higher. The ES rallied higher by 95 points going into 3:45, with a few big ranges in between. Up 50 handles from 2 pm to 2:15, down 26 points in the next 15 minutes, etc.

I have seen a lot of the big ups and downs in the index markets, but the last two weeks have been comparable to the 2007 credit crisis where there were endless 50 to 80 handle moves, one after another.

In the end, it all came down to people selling into the Fed and catching people offside.

Simply put, traders were out of position going into the Fed meeting. After a robust move last week, stocks opened strong and on Monday, stocks were punched in the nose. The S&P fell 91 basis points on Monday and closed at its low, then gapped lower and at one point fell 1.3% on Tuesday.

From Monday’s high to Tuesday’s low, the S&P 500 was down 2.2% and it was down again on Wednesday ahead of the Fed’s announcement.

Traders kept taking off long exposure and/or getting short ahead of the news, which allowed stocks to roar higher once the news was out — even though the news wasn’t necessarily good!

The plan all week has been not to do anything stupid. Essentially, bide our time as the pre-Fed action soaks up most of the nonsense while trading the viable setups. We had some good fortune with Apple early in the week, then Nvidia and a few growth stocks on Wednesday.

With bulls grabbing the wheel yesterday, it’s now up to the longs to maintain control. Breadth was very poor early in the session but finished higher on both the NYSE and NASDAQ, which is a step in the right direction.

As Danny has said so many times in the past, it takes days and weeks to knock the S&P down and just one to bring it back.

The S&P 500 found support at last week’s gap, then ripped higher back above its 10-day and 21-day moving averages, as well as the prior week’s high near 4673.

Now approaching resistance near 4720 again, bulls are looking for the breakout.

If it can clear that, bulls can start looking at upside extensions. The reality is that we don’t know how the market will handle a gap-up scenario. Does quad-witch have one last trick up its sleeve?

For the Nasdaq, we’ll look at the futures, as the NQ has not been able to clear the 16,436 level. Let’s see if it can do so today or at the very least, by the end of the week.

Growth stocks have clearly weighed on the Nasdaq. 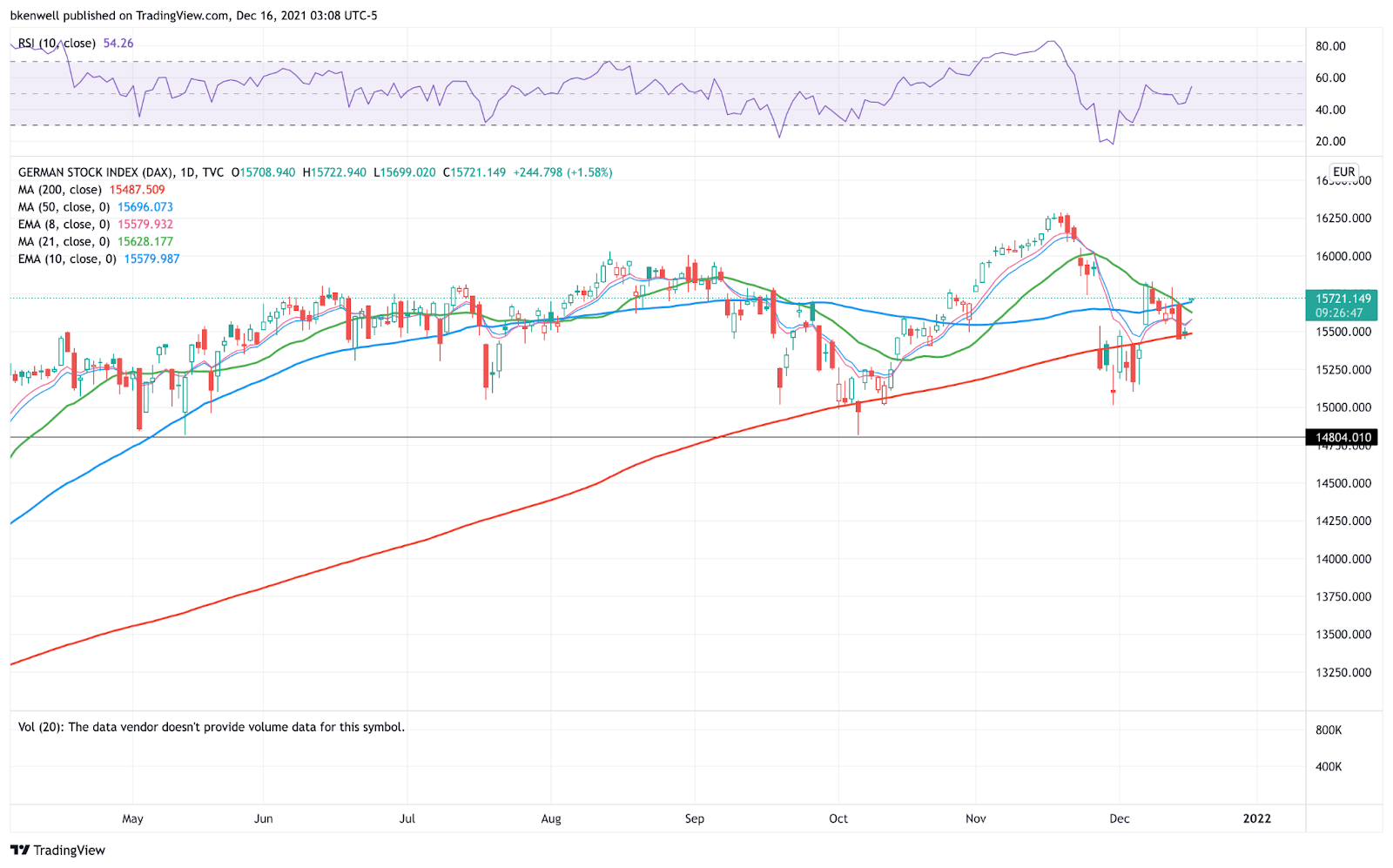 At the beginning of the month, we had a pretty tasty trade in the Dax that spit out almost 700 points on the upside (of course, that’s to the peak, but it’s just for context).

However, the 21-day moving average was stiff resistance. Gapping above that mark now, let’s see if the Dax can gain some momentum back to this month’s high, at 15,834. Above that and 16,000 is possible.

I have been going on and on about PG, but now that some money is rotating back into growth and tech stocks, will we see some of that money rotate out of P&G? If so, keep this one on your radar, specifically on a test of the 8/10-day moving averages.

If you caught just one of those, it should have paid quite well. Now I want to see which ones can continue to power higher. NET and UPST have the most ground to make up, while ROKU gave us a slick little reversal yesterday.

Let’s see if growth stocks can gain ground. I’d love to see a low in the group now using ARKK as the proxy for the growth stocks.

On Wednesday, ARKK had its highest volume day since May, when it bottomed the first time around. Last week, on Dec. 6, there was a pretty solid bullish reversal trade and while ARKK has been back under pressure, we haven’t broken the recent low.

Yesterday we had that nice-looking bullish outside-and-up day. To unwind it and lose $90 would be a real blow to bulls’ sentiment. Hopefully we can avoid that and give growth stocks a bit more “oomph” in the rebound.

If so, it will bode quite well for some of our picks.

On another note, we also got that breakout in COST we looked at earlier this week, over $560. If it holds $560, Costco can make a potential run to the next upside extension level.

Additionally, Lowe’s (LOW) had a bullish engulfing day too. Let’s see if that can gain some upside traction back to the high near $263.