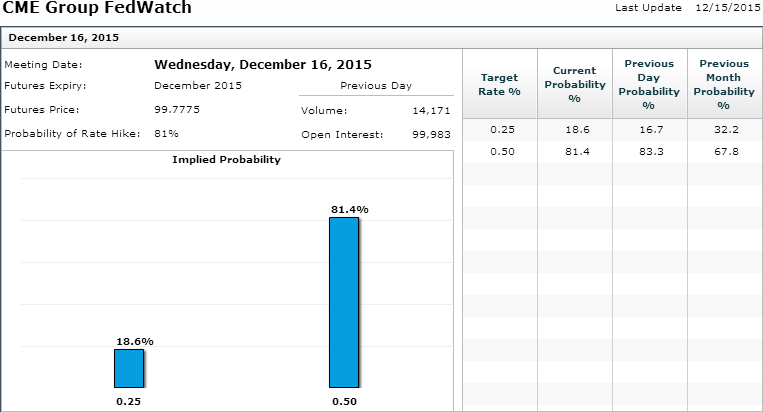 MrTopStep has a trading rule, and its called ‘It takes days and weeks to knock the ESZ down and only one to bring it back.’ On Monday the S&P futures (ESH16:CME) made a low of the day at 11:38 ET, and by 12:38 CT the futures had rallied a total of 62 handles or 3.10%. Last year the S&P lost 120 handles in the first two weeks of December, and made its low on the 10th trading day of the month. This year the ESH lost a total of 120 handles in the beginning of December, made its low, and rallied on the exact same trading day as last year.

We wrote in Monday’s Opening Print how we thought that either Friday’s close or an early Monday low would drive buyers in, and and after Monday’s 1983.50 low, the S&P futures ripped higher more than 60 handle’s. However, at yesterday’s high I put out on Twitter a leading question suggesting that as bears covered last week’s shorts yesterday morning to scale back risk ahead of the FOMC announcement, that after the bounce, the buyers were at some point going to need to remove some risk while take profits. About an hour later the ESZ had sold off from 2045.00 down to 2035.00.

There is not much that has not been said when it comes to the final Fed meeting of the year. According to the Fed Funds futures on the CME floor, there is a 81.4% chance that the fed raises rates, but we think the number is more like 90%. The chances that the fed doesn’t raise rates could create a dilemma of its own. The markets have always reacted positively to the idea of keeping rates low for an extended period of time, and based on the Fed’s current stance, a failure to raise rates could be perceived as a big negative for the S&P. There are a lot of questions surrounding how the S&P will react once the fed’s decision is released. Most think the rate hike is priced in and that the markets will sell off. We do not disagree with that scenario, but we also have a trading rule that you’re supposed to ‘fade’ the initial move after a fed announcement, and despite the gravity of the situation, we still think the ES will move higher.

While yesterday’s trade saw the ESH16 move sharply higher, when you take out the pre-market globex volume, and take out the S&P e-mini (ESZ15/ ESH16) spread and algorithmic trading volume, the ESH overall volume was less than 1 million contracts. Clearly the thinner volume helped the algos push the S&P higher. Its 10:30 ET and the ESH is trading 2041.50, up 4.50 points. We think it’s fair to say no one knows for sure what the S&P is going to do tomorrow, but what we do know is it’s going to be very volatile come 2:00. Today, crude oil inventory numbers, and the fed tomorrow, it’s the CLF options expiration, and Friday is the third largest quadruple witching in history, $1,=.1 trillion in S&P options expire. Volatility is the name of the game right now, and if you’re following JP Morgan’s Marko Kolanovic, we should see a 2% move in the S&P on Friday.

Wall Street Journal: 5 Things To Watch From The FOMC Meeting 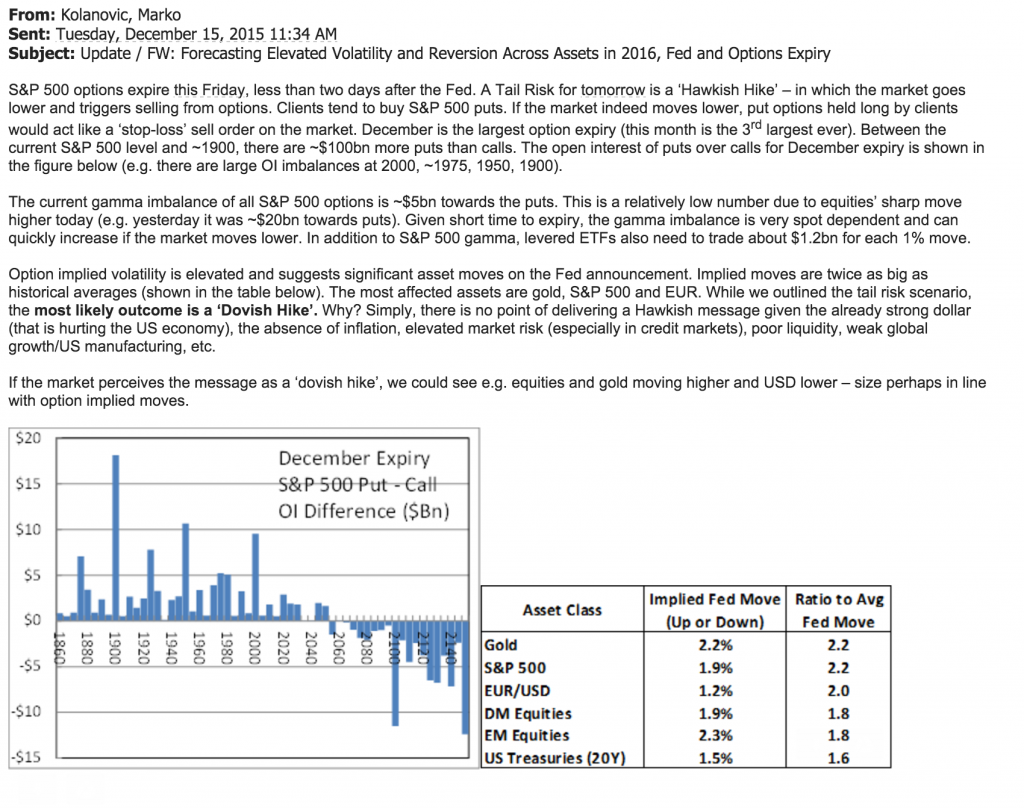 Our View: There is no way anyone can say we have ever seen anything like what we are seeing today. First, no one would have ever have thought rates would be at zero for so long yet pushing them higher today. In addition to the fed there are a number of economic reports including the API. After a 120 handle drop over the last two weeks, and a 62 handle rally in 24 hours, we think we could be in for a very wild day of ups and downs. At the end of the day this is how the game has been played all year, rips and big dips. The question today / this week is, will the dip lead to a big rip or a big let down? Our view is we will be trading but there is no reason to do the standard call because today is anything but standard. Nothing can be ruled out.