I am not 100% sure, but it looks like the ES is trying to stage a rally. The mutual fund and ETFs have been heavy sellers on the close of the last two sessions of November, but sometimes the money gets put back to work on the first few trading days of the new month — in this case, December.

My guess would be the sellers show up. They have all month on the gap ups.

It’s 9:37 pm and the ES just traded 4600, up 42 points off yesterday’s low, which brings me to one of MrTopStep No. 1 trading rules: It takes days and weeks to knock the S&P down and only one to bring it back.

Well, the proof will be in the pudding today!

Remember, the S&P never does what most people want it to do when they want it. My guess is people are offside/short and there are buy-stops building up. Will the rally hold? We shall see.

I started to do the normal ES recap, but after 5 lines and all the ups and downs, it just got too hard to write about every rip and dip.

Instead, let’s be honest about where the markets are and where they are going.

Currently, the market is stuck in the taper, Covid-19 crunch. With the S&P still up over 26% this year (and up about 30% at the highs), the shift of negative news has made it easy for the sellers to come piling in. The constant sell programs have not let up over the last few weeks.

When I spoke to the PitBull yesterday, I told him everyone was trying to be long for the year-end rally and he said, “it’s way too early for that.”

I agree, but you just don’t know when a bounce turns into a low. That is why I am sticking with my trading plan of buying the Jan ES 4900 and 5000 calls and the Dow 39,000 calls. That way I know exactly what my risk is and I don’t have to worry about something bad happening and the futures selling off hard.

The ES fell ~88 points from Monday’s high to its Globex low on Tuesday morning. By the time the 9:30 ET open came around, the S&P futures were already up 42 handles off the low and opened at 4622.50.

From there, we pushed to a high of 4644.25 and reversed hard. That’s as the Powell comments came into play about a faster-than-expected end to the Fed’s asset purchases. In less than 30 minutes, the ES fell 60 handles.

In the end, the ES was constantly moving all day and had an 87.25 point trading range during the regular trading hours. The day was filled with big 20 and 30 point moves, a scalper’s dream.

Shenanigans? Yeah, you could say that. Yesterday’s late-day MIM reading flashed $9 billion to sell, erasing any late-day hopes for the bulls.

But that didn’t include the post-close action. Almost immediately after the 4 pm cash close, we saw the S&P futures explode higher, rallying 20 handles in about 10 minutes. By the 5 pm futures close, the ES was up 23 points and going out at its “after-hours high.”

That’s some end-of-the-month trickery right there, as ETFs, mutual funds, and others rebalance. Obviously, that had some impact on the MIM, as well as the bad breadth.

Remember, we had a 90% downside day on Friday (admittedly, a short session). But that’s essentially two 90% downside days in a three-session span and it has me a little cautious even with today’s gap up.

So far, much of the directional action has happened overnight. On Friday, we woke up to big losses, then big gains on Monday. Tuesday’s open was notably lower, while today’s is notably higher.

Those who bought into the close yesterday should fare well today — at least at the open. I would be reducing some of my risk on my long trades on a gap-up open and shift to a break-even stop.

For the futures (shown above), bulls need to take out 4670. That’s effectively the high for Monday and Tuesday, but it would also put the ES above the 10-day and 21-day moving averages.

I don’t necessarily expect that all today, (as it’s up another 41 points from current levels), but by the end of the week, it would be a welcomed development for the bulls.

Does it bother me that the SPY came thiiiiis close to tagging the breakout area and the 50-day moving average and is now gapping higher?

Not anymore — but it would have in the past.

I do think it would have been healthier to gap down into this level, find support and reverse higher back through Tuesday’s low though.

There’s not a lot to say about the Nasdaq.

On the futures, it needs to clear 16,436 and with this morning’s action, it’s not far from doing so.

As for the QQQ, bulls need to take out $401. A close over this level puts it above this week’s high and all of its moving averages. It also puts Monday’s high in play near $409.

If Apple has anything to say about that, the QQQ may be in good hands.

Yesterday we were looking at long setups in Home Depot (HD), Dollar Tree (DLTR) and Macy’s (M). The other names didn’t trigger, but these did.

Apple (AAPL) was a trade we had from Monday, looking for a daily-up rotation over $160.50. I will definitely be trimming into today’s opening push, with AAPL up 3.1% yesterday and up another 1.9% in pre-market trading.

It’s up to you whether you want to trim any of the others. Macy’s is a longer-term swing, but the others are short-term setups. If these names gap higher on the day, I will not let them go negative on me (flip from green to red). Not in a tape like this.

You can always stop out and get long again if the setups reoccur.

The bulls will be feeling good at the open, but we have to remember it’s a game of offense and defense and at least for me, defense means not letting a winner turn into a loser. 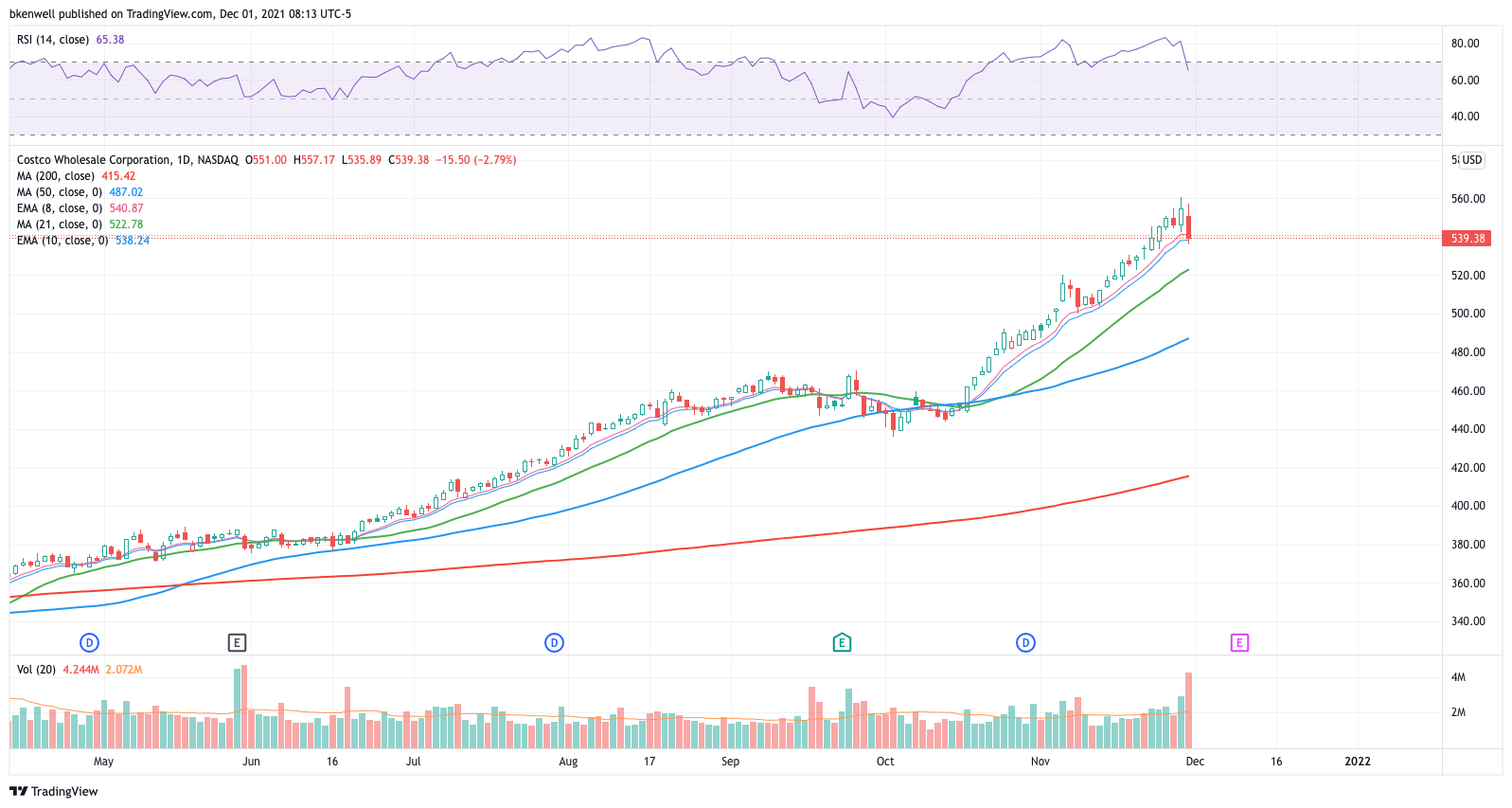 Costco has been a relative strength beast, basically shrugging off the weakness in the market. It’s down into the 8/10-day moving averages. With a sluggish pre-market gain, Costco could be a go-to name today.

If we break below Tuesday’s low, look for it to reclaim this measure and give us a possible bullish reversal entry.

Otherwise, a bounce from here could put $550+ in play.

J&J is a name I will definitely have on watch today.

It’s trading down into the 21-month moving average and the prior breakout area near $154.50 to $155. The divergence is also a plus (blue arrow, bottom of the chart).

Gapping slightly higher on Wednesday makes it a bit trickier, but some type of reversal could be brewing here. I would love a gap below the November low and a reclaim, but the “gap below” part of the equation seems to be off the table for now.

A gap-and-fade could be possible, though. Just keep an eye on this one.

Chart of the Day: Apple Sparked the Selloff, the Dollar Can Rescue It