Danny’s View: Jobs Report On Tap. Here Are The Levels To Know

Taking profits on a ton of of open positions.

The bear market may not be over, but that’s not stopping bulls from grabbing control of the recent momentum.

In this game, you can do one of two things. You can either be a two-way trader and play both the long and the short side. Or you can stick to one side — either a buyer or a seller.

Over the years, I have seen traders of all sorts who master their preferences. But those that master it, know the trend.

In Yesterday’s Our Lean, I said that I couldn’t rule out an early rally, but that “the ES tends to go sideways to down after a big up-day.”

As for today, it all hinges on the Jobs report.

Economists expect 200,000 jobs to be added in the month of November, which would be the lowest monthly jobs gain in two years.

However, is that still too much for the Fed?

“Chairman Jerome Powell suggested in a speech on Wednesday the economy only needs to add around 100,000 new jobs a month to soak up all the new workers entering the labor force. By that measure, the current pace of hiring is far too strong. It’s adding upward pressure on wages and contributing to persistently high inflation.”

I’m not an economist or a macro-guy; I don’t know what the “goldilocks” number for the jobs report is.

We don’t want a hard landing, but we need a slowdown in the labor market. That’s a tough needle to thread, especially as it takes time to work all the rate hikes through the economy.

If we see a mild dip down to the level — and Bret will talk about this below — it could give bulls a dip-buying opportunity. If it fails, 4020 could be in play, which is roughly the 50% retrace of the two-day rally and the rising 10-day moving average.

Our Lean, Our Lean: It’s jobs Friday, but don’t forget, a bullish reaction can turn today from Friday into FRY-day.

In the end, it was an early pop that fizzled out, but the bulls held where they needed to. In terms of the ES’s overall tone, it was flattish after the first 90 minutes. In terms of the day’s overall trade, volume was solid, at 1.77 million contracts traded.

I’m going to keep it short ahead of the NFP report at 8:30 a.m. ET and may be back for an update later if something notable developments. But for the most part, we have played a damn good round this week and don’t want to force anything on Friday if it’s not a good R/R.

For now though, we continue to take trades, lock in trims and raise our stops. You can see our “Open Positions” tab is littered with the most trades we’ve had on since August. That speaks to the healthier trading environment we’re seeing right now.

I don’t want to put on too many new positions and instead prefer to keep trimming and getting those stops up to breakeven or better. Pat yourself on the back. It’s been a good run. 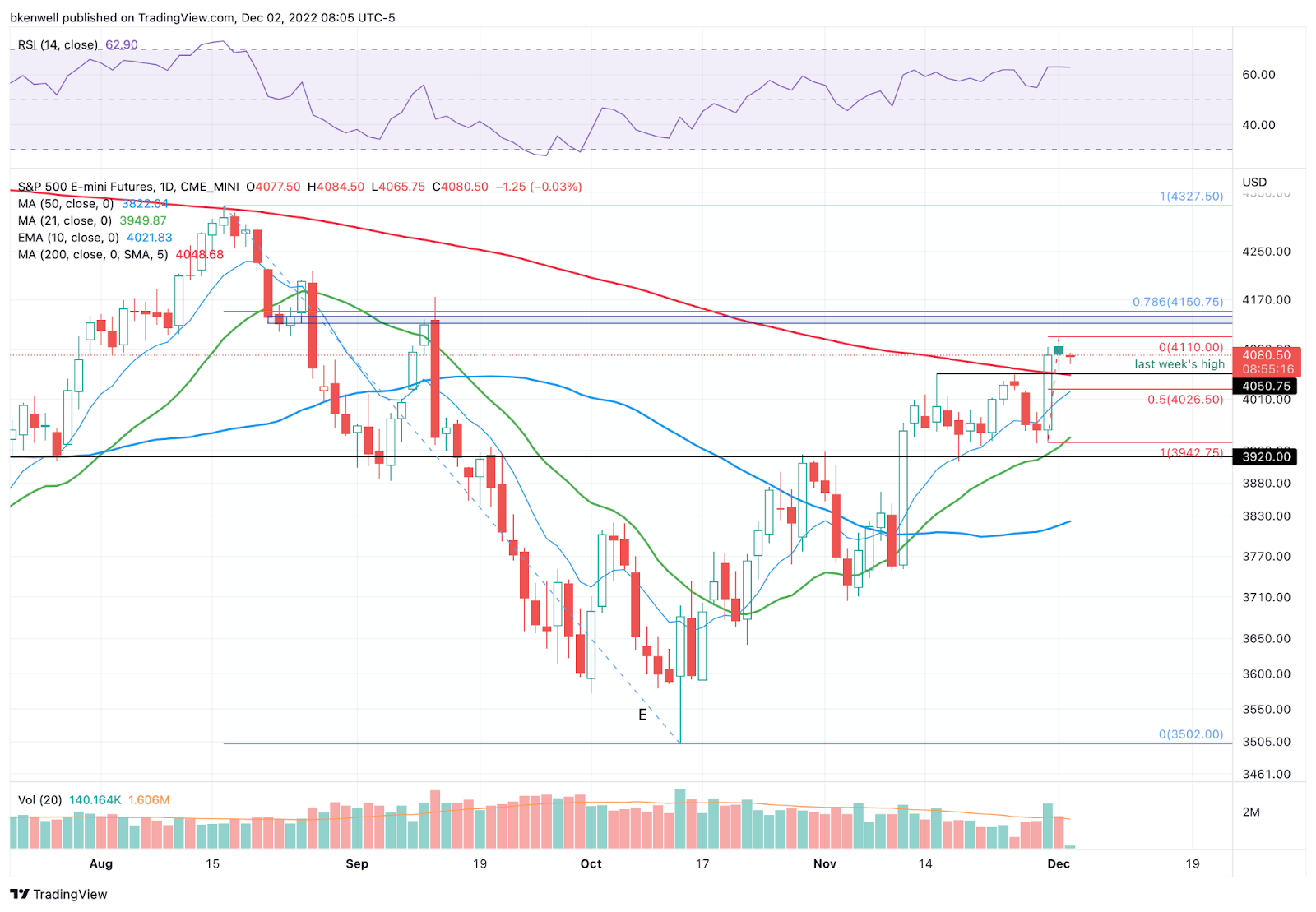 On the daily chart above, you can see where the two significant levels of support reside.

The first is around 4050, which is a multi-week high, yesterday’s low, and the 200-day moving average.

If we get a dip down to this level — say down to 4050 and a quick bounce back up through 4054 (yesterday’s low) — it could give us a bullish reversal to work with.

On the upside, we need a sustained move above yesterday’s high (4110) to continue the rally.

I just want to keep this simple for those holding SPY.

Above $402.30 and the 200-day is healthy action for the bulls. Below the 10-day raises a few questions for the active sequence.

The SPY filled the $408.50 gap and is stalling at the weekly VWAP. It’s looking for direction now.

The TLT has treated us marvelously over the past weeks. If you want to cut down to ½ position ahead of NFP, I can’t blame you. I certainly want to be down to ½ or ⅓ if we see $106 to $108.50, where TLT starts to run into some weekly measures, as well as the 50% retracement.