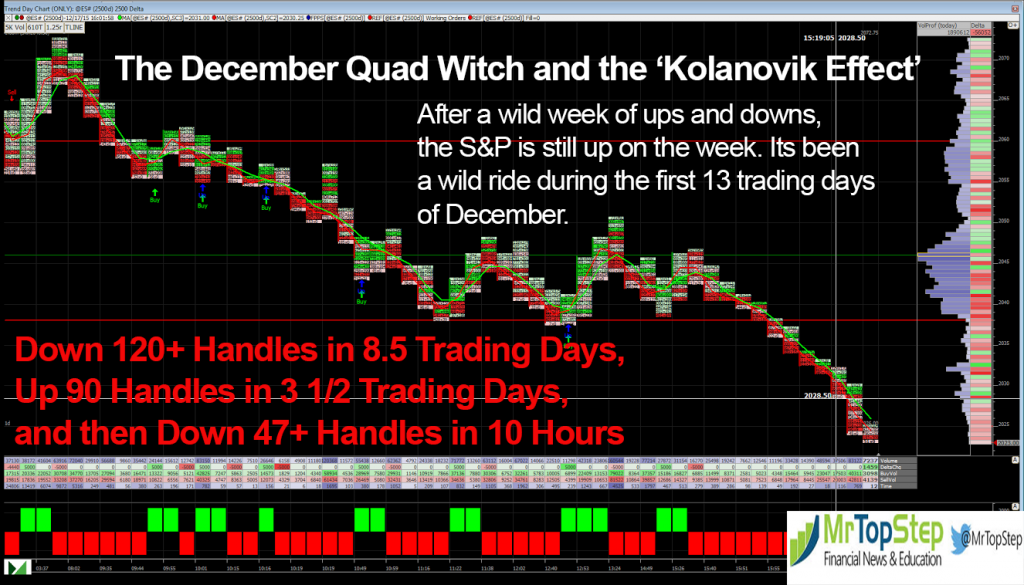 The S&P 500 futures (ESH15:CME) traded higher, all the way to 2072.75, up almost 90 handles from Mondays 1983.25 low. After the U.S. Federal Reserve raised interest rates for the first time in nearly 10 years, the futures rallied sharply into the close on Wednesday, and continued to extend their rally during the overnight session. When we asked MrTopStep what he thought about the S&P’s before the open, he warned people about big resistance at the 2090.00 level vs. the ESZ15, and warned that the S&P had rallied 90 handles in less 4 days, and that the risk to the S&P was today’s December Quadruple Witching. From the 8:30 CT open to the 2038 low it was one sell program after another. MrTopStep referred to the sell off as the ‘Kolanovik Effect.‘

Maybe it was a case of the S&P going too far too fast, but that has been how the overall price action has worked all year. Reverse lower over several days and then take back most of the losses over a few trading days, but the speed of how quickly the ESH16 went flying back up, and then how quickly it reversed back down in front of todays December Quad Witching, was an ominous sign. Clearly the S&P is moving from one major event to the next, and with the threat of a big sell off during today’s expiration, the markets remain in the same position they were before the rate hike. While many traders may not be saying it, there is a high level of anxiety and uncertainty right now. Will it remain that way into the end of the year? I do not think so, but it is going to last a few more days. Many traders, including me, did not think we would be seeing the big dips and big rips this late in the year, but timing is everything, and if you follow the ‘Santa Clause’ study you know it does not start until after Christmas.

According to the Stock Traders Almanac:

In addition to the Fed rate hike question, December packs its usual full docket of seasonal influences. Year end tax-loss selling tends to create early month weakness, but unlike November, pre-election Decembers are much stronger on average, up 3.2% on the S&P since 1950 versus 1.7%.

Around mid-December the so-called January Effect usually begins where small caps outperform large caps into Q1, though most of the gain takes place the last two weeks of the year. Decembers Triple Witching Week and week after are the most bullish of them all with DJIA up 19 of the last 24 TWW and 17 of the last 24 weeks after.

Finally, there is the vaunted Santa Clause Rally. Yale Hirsch defined the SCR in 1972 as seven-trading-day period that spans the last 5 trading days of the year and the first two of the New Year. The S&P has averaged 1.4% over the period. But, the real significance is when it does not appear. As we remind in the headline on page 114 of the 2016 Almanac, “If Santa Clause should fail to call, bears may come to Broad and Wall.” In the table below you can see that the last four times SCR was negative the year was either flat or suffered a bear market. The S&P was down -3.0% on the S&P this year and 2015 is on pace for a flat year. 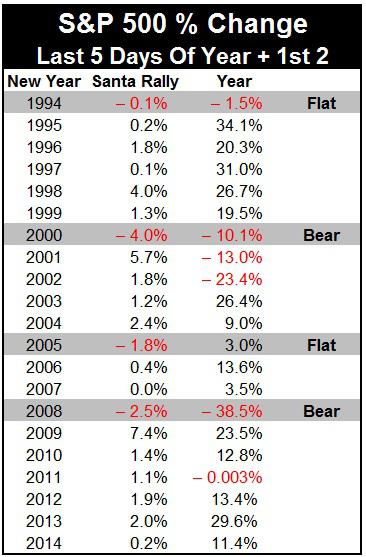 Will Santa Come to Town?

As I stated a few weeks ago, it’s going to be difficult to get the ESH16 up to 2200 at year end, and if the futures drop today, it will make ESH 2150 even more difficult to reach. That said, if you take the most recent moves; 120 handle drop in 8 1/2 trading days, 90 handle rally in 3 1/2 days, and a 47 handle drop from yesterdays 2072.75 Globex high, it all spells one thing; extreme volatility. Will the Marko ‘Kolanovik Effect’ actually see the ESH down another 2% today? Here is how I see it; you can’t rule out anything based on the most recent price action. What we have learned is after a big move there is usually a reversal. The December expiration study for the S&P 500 cash (^GSPC:SNP) shows today as being the statistically the strongest day of the week, up 22/ down 9 of the last 31 occasions. The Monday after is very weak, up 15 / down 16 of the last 31 occasions.

In the end it’s the seasonalities vs. the ‘Kolanovik Effect’. It is my feeling that if the equity index futures do fall hard today, Monday could turn out to be ugly also.

Our View: It’s fun to be buying and selling when the markets are moving all over the place, but what no one wants to see when going into the holidays are big losses. Hedge funds are reporting their worst year in a while, many of the big investment firms are usually toning it down this time of the year, but with all the big ups and downs, no one is going on vacation with all the extreme movement in the stock market. It is fun, but it’s scary too. Our view is it to take a very slow approach to buying and selling the ES this morning. If the S&P acts the way it did on yesterday’s close, the S&P could be in for a very long day.