The bulls did the heavy lifting yesterday.

I figured we would break out of the narrow trading range but in all honesty, I didn’t think the ES was going to rally to 4093 in just a few hours. However, it makes sense when you consider the number of stops that were accumulating below support and above resistance.

One of those was set to break and once it happened — in this case to the upside — it triggered an avalanche of buy-stops. It’s why our charts outlined a plan of waiting for a range break. Once the S&P took out the prior day’s high, it was off to the races toward the prior week’s high.

That said, I have to be honest too.

Another thing. The MIM chart is below. It shows “where the money flow” has been going for the last week (5 sessions), the last two weeks (10 sessions), and the last month (20 sessions). Anyone who says the MIM — or MOC orders, (market on close) — means nothing, knows nothing. Look at where the money has been flowing and then look at what the S&P has been doing. I don’t know anyone else who provides this information, so use it to your advantage.

When the ES rallies 150 handles in 4.5 hours, there is no way all the shorts got out. When that happens, traders have three choices: Hold, roll the position higher or get out. I think yesterday was the latter.

Our Lean: I can’t rule out a rally this morning, as there may still be upside momentum left since the rally took place late in the afternoon, but I have to go with the MrTopStep rule that says “the ES tends to go sideways to down after a big up-day.” I am not saying we will see this, but the 50% retracement of yesterday’s day range is 4022. 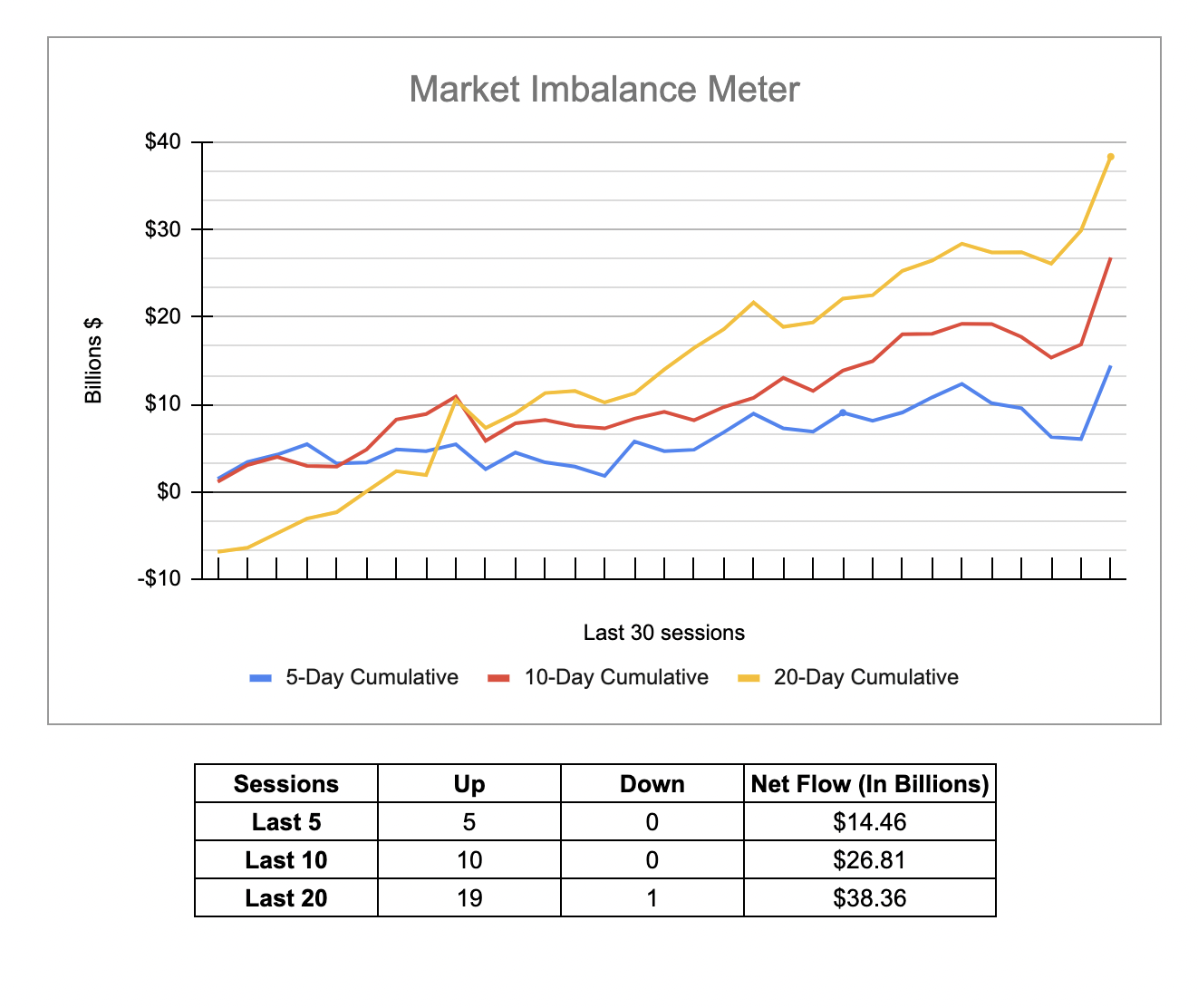 The ES traded 4067.25 as the 3:50 cash imbalance showed an amazing $11.1 billion to buy and traded 4082 on the 4:00 cash close. In the end, you can say but that $11.1 billion to buy was why the markets rallied so much. Sure the shorts were stuck, but I said a few days ago big things happen at the end of November. In terms of the ES’s overall tone, it was dead in the first four hours, but once those Powell headlines hit it was game on. In terms of the ES’s overall trade volume was big at 2.35 million contracts traded.

A “90/90 day” happens when we have 90%+ upside breadth and 90%+ advancers. These days are rare but can often mean that the low is in. At the very least, it marks a huge return in demand and can give us a low to trade against.

That said, yesterday was stunning. We got the rotations setups we were looking for. While we had to take on risk, we did so in a prepared and measured manner and now we are getting paid for it. Updates on open positions are below.

Today’s PCE number is important — in regards to the Fed — and Friday’s jobs number is critical as well. So keep those in mind as well. 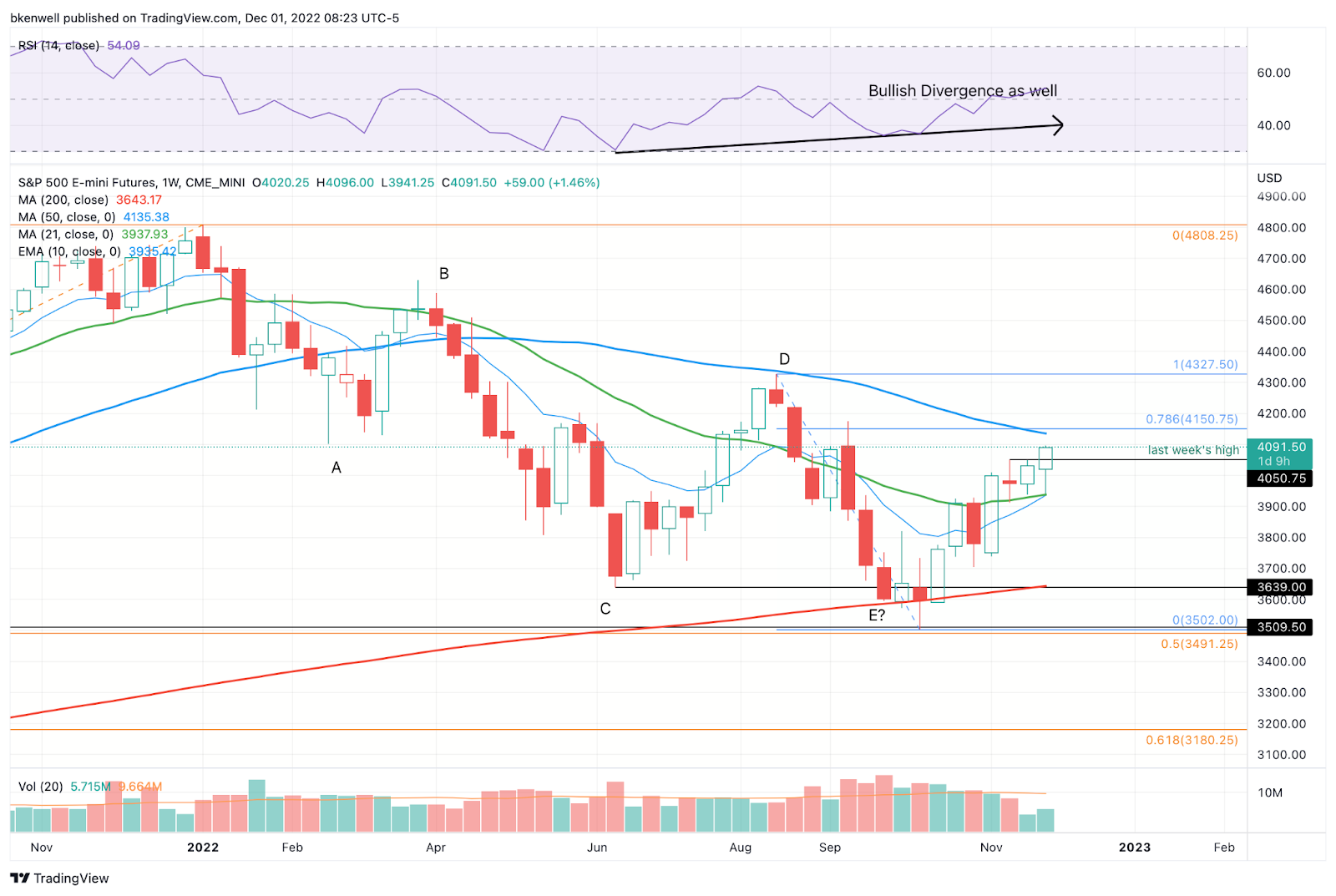 Using the weekly chart for the ES, you can see how the S&P held key support and rotated through two weeks’ worth of highs.

You can also see how that opens the door up to the 4150 area, where we find the 50-week moving average and the 78.6% retracement. For now, that’s my aim, even though the caveat here is the PCE data and the jobs report.

Now that’s what I call a statement. The SPY ripped through the 200-day moving average and the last two weekly highs near $402.30. It even charged toward the $408.50 gap-fill level and the weekly VWAP measure.

That triggered nicely and now we are certainly taking profits after such a big move yesterday. Down to ½ here and maybe look for $350-ish next.

Yesterday was a day with risk, but those that took it are being paid handsomely. As noted yesterday, we were looking to “refill” and we got the dip to the 10-day.

Danny’s View: It’s The Bulls’ Ball To Drop With Powell On Tap